What do Chilean toll roads and British utilities have in common? They're both owned (among other subsidiaries) by Brookfield Infrastructure Partners (NYSE:BIP). The company reported earnings yesterday, and things are looking up for this dividend-dealing international corporation. Here's what you need to know.

Here's where it gets tricky: To gauge a company's effectiveness at turning sales into sustainable value, analysts make expectations on a company's net income. And, although the company's $0.35 EPS beat Wall Street expectations by $0.02, it's more of a proxy for profit, rather than profit itself.

The more telling statistic is "funds from operations," which takes into account depreciation, amortization, and deferred taxes. For Q3 2012, Brookfield's funds from operations dropped $0.04 cents (to $0.58), and it's down 7% for the first nine months of 2012.

Brookfield's subsidiaries span the globe and business spectrum. Utilities, its largest division, bumped up slightly due to connections revenue and rate base additions. The biggest gains came from its Australian railroad, where four newly-laid tracks helped to bring in a 140% jump in sales.

"Despite the slowdown of the global economy, our diversified portfolio of businesses continued to perform well," said CEO Sam Pollock. After bestowing kudos on railroads, Pollock went on to note:

We are also making significant progress closing a number of strategic initiatives that will substantially increase the scale of our electricity transmission, regulated distribution and toll road operations and will lay the foundation for the next phase of growth for our business.

Jump on the train?
Investing in Brookfield is a decision to invest in investors. Although the company owns and operates utilities, pipelines, railroads, and timber around the globe, it's best at picking strategic acquisitions that can continue to excel at what they're already doing.

If the following words flash dollar signs in your mind, you might be bullish on Brookfield:

If these keywords just made you more bored than bullish, let's consider the value proposition. Brookfield has continually made acquisitions over years that have rewarded shareholders with a hefty (albeit decreasing) dividend and a soaring stock price. 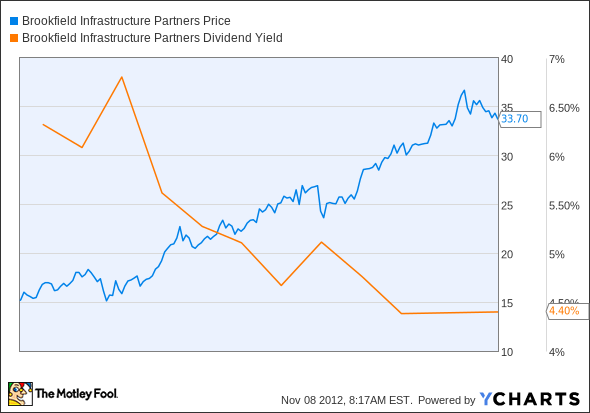 Brookfield is an awkward offspring of stable cash flow and cut-neck competition. Investors expect a lot from this company, as evidenced by its rising price and its high flying price-to-cash flow ratio. To see how its offerings chalk up, here are some companies with similar businesses:

It doesn't take an eagle eye to see that Brookfield's costliness and lackluster dividend -- at least compared to these companies -- don't lend itself to a buy.

Numbers versus notions
But, even with these comparisons, I'm long on Brookfield. There are more bad investors than good investors out there, and the company has found a diversified niche for itself in international infrastructure. It's making smart moves to refinance debt, expanding its South American operations, and building up transportation and transmission channels that will carry the world's increasing energy use for decades to come.

These high hopes have been somewhat baked into Brookfield's price, but its dividend and strategy aren't going to disappear. Usage on investments will continue to increase, cushioning margins, and giving Brookfield even more cash to do what it does best.