There's been a recurring theme of late that Apple (AAPL 4.08%) has lost its innovative touch. I mean, the company hasn't come out with a major revolutionary breakthrough in two whole years! How dare it not continuously reinvent the wheel each and every year! We need new types of wheels posthaste! The fastest, thinnest, and lightest wheels ever made that can fit in your pocket!

The bond bear
Just this week, Doubleline Capital CEO and Apple bear Jeff Gundlach was on CNBC predicting that Apple's next stop was $425 -- over another $100 per share of downside from current prices. Gundlach, a bond guru by trade, believes that since Apple's primary product innovator (Steve Jobs) isn't there anymore, the company's best days are now in the rearview mirror. He derides the iPad Mini, saying changing products isn't innovation, and then wonders if Apple will soon come out with new "tooty-fruity" iPad Minis in different colors and try to pass it off as innovation.

At $425, Apple's market cap would be just $400 billion. That would put make its $121 billion in cash an absurd 30% of its value. That's about a cash-to-market-cap threshold that tends to bring out the deep value bargain hunters, but usually only with companies in distress, not companies at the top of their game facing all-time record quarters. That would also translate into about 9.6 times earnings, or 6.7 times earnings excluding cash. Apple at $425? I'll take two (at least), please.

What's the rush?
The problem here is the flawed expectation that Apple needs to come out with revolutionary innovations every year to stay ahead of the competition. Last time I checked, revolutions take years to pan out, so anyone at the forefront of said revolution shouldn't be in any rush to start the next one. In the meantime, steady incremental improvements are par for the course.

On top of that, Gundlach doesn't seem to acknowledge how much innovation is taking place under the hood. It sounds simple on paper to make things thinner, faster, and lighter, but that requires major technical and engineering achievements inside the devices.

Apple has had three revolutionary products in recent memory: the iPod, the iPhone, and iPad. These devices came out in 2001, 2007, and 2010, respectively. The iPhone and iPad are huge catalysts for the mobile revolution, the enormous secular shift toward smartphones and tablets that will take many years to pan out. Again, what's the rush?

"We're (still) No. 1!"
Don't just take my word for it: Management consulting firm Booz & Company has just released its report  (link opens PDF) on global innovation in 2012, based on a survey of almost 700 companies and interviews with 12 senior innovation execs and CTOs. For the third year running, Apple has scored No. 1, followed by mobile rival and search giant Google (GOOGL 4.20%) and then 3M (NYSE: MMM). These top three have held down their respective spots for the past three years. 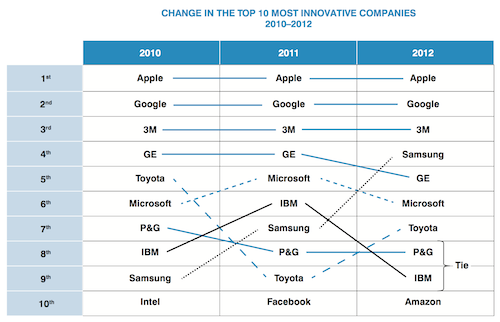 Amazon.com (AMZN 3.66%) joins the list of top 10 innovators, displacing Facebook (FB 1.83%) from its place last year. Senior partner Barry Jaruzelski said this swap might indicate that social media companies may be losing their "initial luster," while Amazon scored because it's come up with increasingly innovative ways to provide value to customers.

Apple's archrival Samsung has risen from No. 9 in 2010 to No. 4 this year, overtaking Microsoft (MSFT 2.76%). The report also points out that Apple's able to accomplish this with far less research and development spending than its tech peers. 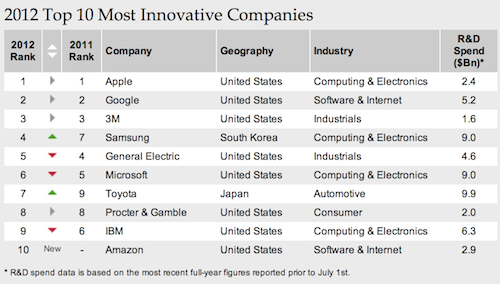 Apple's $2.4 billion in R&D spending for the period in question is roughly a quarter of the $9 billion that Mr. Softy spent, and less than half of what Google spent. Amazon's getting fairly decent bang for its $2.9 billion R&D bucks.

The iPad was Apple's most recent big risk. Remember that prior to that, tablet PCs were accepted as a dead product category (because Microsoft fumbled them a decade earlier). Marketing chief Phil Schiller recently said that launching the iPad was "a risk to [Apple's] image." After all, raising the dead is no easy task. That bet has clearly paid off. Now it's Microsoft's turn to take a shot.

Gundlach's wrong. Apple's still got it.