Ameren (NYSE:AEE) reported earnings Friday, missing estimates and calling into question its market-defying dividend. But will this quarter kill Ameren, or does this utility stock's drop present a lucrative entry point for savvy investors?

Number crunching
Top-line numbers did not tip their hat to Ameren. Revenue dropped to just $2 billion, almost 12% lower than 2011's third quarter. But with analysts estimating $1.7 billion in sales, Ameren still squeaked out ahead.

The bottom line was not so lucky. Although net income bumped up 31% to $374 million, adjusted net income measured up to just $1.33 EPS, nine cents less than Wall Street's average estimate.

For a peck of perspective, here's how the utility's sales and net income have fared over the past five years. 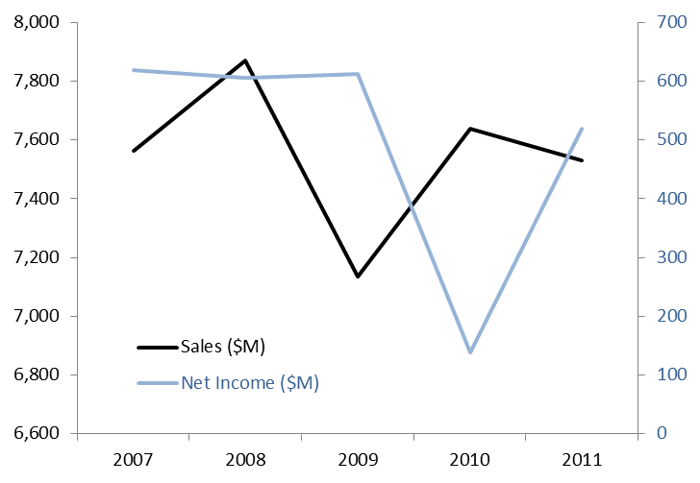 Looking ahead, Ameren is setting its eyes on satisfactory yearly earnings. Management announced that investors can now expect 2012 core earnings around $2.35 to $2.45, compared with the previous wider range of $2.25 to $2.55.

Digging deeper
"The third quarter was solid from an operations perspective, with our system and people performing very well under extended severe weather conditions," said Thomas Voss, chairman, president, and CEO. "Overall, earnings were in line with our expectations."

Ameren is composed of three business segments, all of which suffered in the past quarter. Its Illinois utility reeled from rate rumbles, Missouri was hit by low demand and higher taxes, and higher fuel costs squeezed its merchant generation segment.

The utility has had mixed experiences with rate approvals, and the ongoing rulings continue to dictate whether Ameren's revenue rises or falls. Its utility subsidiaries are expected to make up 96% of Ameren's 2012 core earnings per share, with the remaining smidgen originating from its merchant generation division.

While Q3 2012's $130 million gas revenue is the same as last year's, electricity sales fell 12.5% to $1.87 billion. The tax man did not cometh for Ameren, though, and a 7% drop in the utility's effective tax rate helped propel profits.

The end of the dividend?
Any investor admiring Ameren will want to take a long, hard look at its dividend. The utility's 5.1% yield is one of the highest around, but it's an expensive endeavor to return that much cash to shareholders. For some perspective, let's see how other utilities are dealing with dividends and debt.

Ameren has manageable debt, but its payout ratio suggests that its current dividend is highly unsustainable. It's OK for this ratio to be sky-high if Ameren has cash to back it up, but the utility's burning through its bucks elsewhere. Capex for the past nine months is $905 million, and it's managed to add just $43 million to its cash coffers since the start of 2012.

Foolish bottom line
I like to see companies investing in themselves, and Ameren's undergoing some heavy renovations that will certainly help its long-term prospectus. But more money out with less money in is a dangerous game, and the utility's dividend may be caught in the crossfire.