Shares of J.C. Penney (OTC:JCPN.Q) hit a 52-week low yesterday. Let's look at how it got here and see whether clouds are ahead.

CEO Ron Johnson has collected as many laurels as anyone else in the retail industry, but his tenure at J.C. Penney thus far has been a disaster. The mall staple reported third-quarter earnings Friday morning, but the stock didn't really crash until Monday. Shares fell nearly 5% Friday, and another 13% on Monday. Yesterday's loss was triggered in part by Credit Suisse's downgrade of the retailer, from "neutral" to "underperform," as the bank said management's strategy has not yet proved itself. The following chart tells the story over the past year. 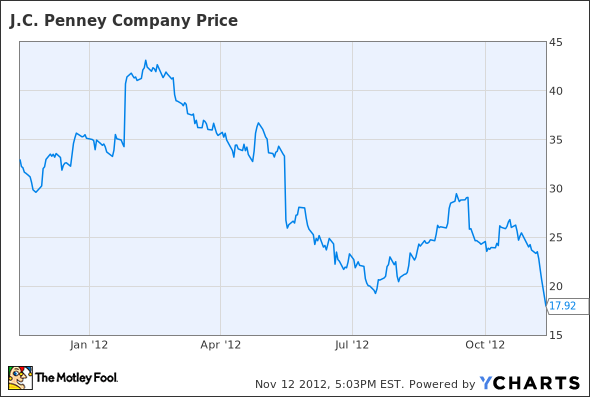 Excitement about J.C. Penney's future started building in late 2011, when Johnson took the helm, and peaked in February, when he unveiled his plan to revamp stores with a strategy to put individual shops within the store. He also got rid of coupons and ditched J.C. Penney's former pricing strategy, which was heavily dependent on discounts and markdowns. Nonetheless, the stock has fallen on every earnings report this year. The company's reported same-store sales of -18%, -21%, and -26% in each quarter, respectively, and the earnings-per-share loss has gotten worse in each quarter as well, falling to $0.93 in its most recent report.

What's next?
Adding insult to injury is the that J.C. Penney's peers seem to be prospering from its demise. Macy's, possibly Penney's closest rival, is trading near its 52-week high, and its stores located near J.C. Penney's outlets have done particularly well. First-quarter profit, by comparison, was up 38%. Kohl's (NYSE:KSS), which has put up steady profit growth in recent quarters, is also seen as a beneficiary.

Johnson and his management team have done their best to spin the poor results and said in the most recent quarter that the shops are "surpassing our own expectations in terms of sales productivity." Johnson also referred to the company as a "start-up" and has urged analysts to wait until 2013 to make an accurate year-over-year comparison. But the market's having an increasingly harder time giving him the benefit of the doubt.

At this point, it seems it would be no small miracle if the turnaround strategy worked out. It's hard to understate the severity of a 26% decline in same-store sales, and the retailer may be running out of time to pull off its rebranding. At the end of the third quarter, it had just $525 million in cash and cash equivalents on the balance sheet and near $3 billion in debt. The company also reported an adjusted net loss of $203 million and negative free cash flow of $389 million in those three months.

With the all-important holiday quarter coming and management promising better results in 2013, there's still time to turn things around, but analyst expectations seem unreachable. The Wall Street consensus for the fourth quarter is $4.7 billion in sales, about a 60% jump from Q3's total, and an EPS of $0.86 a share. By comparison, the chain made only $0.71 a share in Q4 2011, before Johnson started tinkering with the formula.

It seems like a safe bet that the company will miss those estimates. If it posts another quarterly loss, however, you can expect the 10-count from the market to begin. There may be no surer sign of a dying business than a retailer that can't even turn a profit during the Christmas season.