The off-price retailing sector looks as strong as ever. TJX (NYSE: TJX), a leading off-price retailer, just announced hefty Q3 earnings. And there was no sign in the report of any reversal of the business' momentum. That's good news for TJX shareholders, but it also bodes well for the company's smaller rival, Ross Stores (NASDAQ:ROST), which reports its Q3 earnings on Nov. 15.

Let's first take a look at what TJX had to say about its business trends.

Strong earnings
The company clocked an impressive 7% boost in comparable-store sales, or comps, in Q3. The increase was geographically broad-based, with all three regions kicking in higher sales numbers on the quarter. For a change, Europe was a bright spot for a retailer, and TJX logged an 11% jump in comps, to more than $800 million of sales.

Overall, the retailer's earnings improved by 17%, to $0.62 per share, and gross profit margin ticked up to 28.8%, nearly a full percentage point better than the year-ago quarter. TJX also boosted guidance for Q4, but only slightly. The company said that it expects sales growth to moderate for the quarter, to between 0% and 2% comps, matching the performance the company logged in Q4 of last year.

The off-price selling model continues to show its strength in this tough economic environment, powering sales gains that many traditional retailers could only dream of. Macy's (NYSE: M), for example, reported Q3 comps of 3.7% last week. And Kohl's (NYSE:KSS) saw its comps rise a weak 1.1%. Of the major discount retailers, Target (NYSE:TGT) managed a 3% gain itself, and Wal-Mart (NYSE:WMT) is expected to clock in at just 2% growth when it reports earnings tomorrow.

Following in its footsteps
But TJX isn't the only biggest off-price retailer in a market that it shares with plenty of competition. Rival, Ross Stores, with its $13 billion market cap, isn't nearly as big as TJX and its $30 billion valuation. Yet the two companies' fortunes seem to be tied together.

From a valuation standpoint, TJX and Ross Stores have been joined at the hip. On yesterday's positive earnings news, for example, TJX rallied to close 2.7% higher. And Ross Stores came along for the ride, closing up a nearly identical 2.5%.

That mirror effect isn't just a short-term phenomenon for these two competitors, either. Their valuations have moved in lockstep over the past several years: 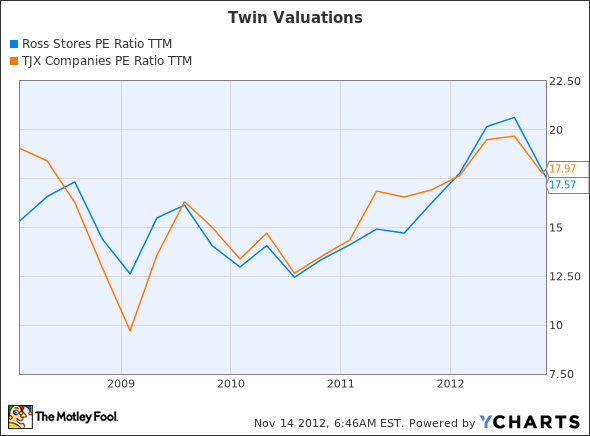 It's true that both companies are benefiting from the same tailwinds, and so you'd expect a certain amount of copycatting. They each operate as off-price merchants, selling an always-changing mix of name-brand apparel and home fashion at 20% to 60% below department store prices. And they have both gained share as department stores, such as J.C. Penney (OTC:JCPN.Q), struggle to adjust to the new retail environment. Those struggles were on full display this quarter, when J.C. Penney reported a blistering 26% plunge in comps.

But the companies have some important differences. For one, Ross Stores has been growing revenue at a much faster clip. That's probably a reflection of the company's smaller size. It operates just 1,100 stores, all in the United States. TJX, on the other hand, has a 2,900-store footprint that also includes locations in Canada and Europe. 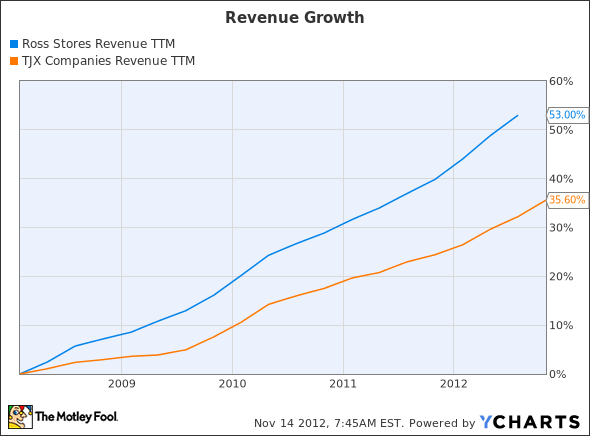 For another, the companies have very different debt profiles. Ross Stores carries less than 10% of its market cap in long-term debt. But for TJX that figure is about twice as high, as the company holds nearly 20% of its own capitalization in debt.

Foolish bottom line
Both retailers are years into a strong expansion cycle -- of sales growth and increasing profitability -- that shows no signs of turning soon. With broad business success like that, the biggest risk is in paying too much for the stock. While I think that either would make a good investment at these levels, Ross Stores seems like the better candidate to me.

The company is far from saturating its market and is in the middle of an expansion into the Midwest and Chicago areas that should boost sales in the quarters ahead. And it is already growing revenue faster than its big rival, but can be bought for nearly the same price.