A report that 353 coal-fired plants are ripe for retirement is another red flag for coal investors.

Coal stocks have bounced back from a low point in recent weeks but the industry still faces a myriad of challenges going forward. Domestically, there's little argument that coal demand will decline in coming year, the only question is -- by how much?

Estimates are that as many as 175 coal plants have already been closed in the past four years and more are on the way. The Union of Concerned Scientists, a liberal group that educates on climate change and other causes, issued a report this week that said, "as many as 353 coal-fired power generators in 31 states are no longer economically viable."

The report should be taken with a grain of sale, as should any report with an agenda behind it, but the point is valid nonetheless. Coal is no longer a growing energy source domestically.

Coal is yesterday's energy
When a new plant is built there is usually an intended life of 30 years. After that point maintenance costs go up, technology becomes outdated, and the plant becomes less economically viable. This is what is happening to the coal fleet in the U.S. The plants identified as ripe-for-retirement are on average 45 years old and they're operating at just 47% capacity.

The problem with this for coal companies is that aging plants aren't being replaced by new coal plants, they're being replaced by natural gas or renewable energy. Just look at the table below to see what a drop-off in coal consumption we've had in the last five years. 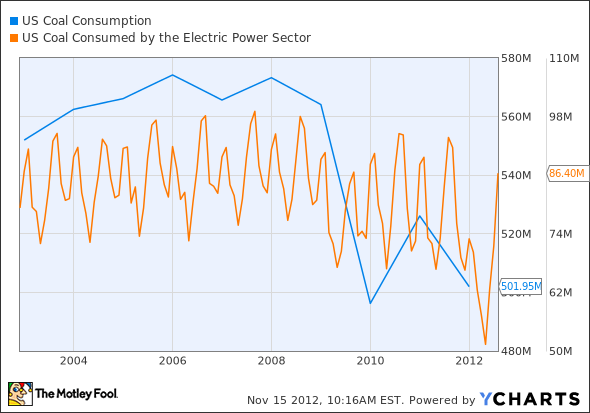 Environmental regulations that affect coal negatively and low cost natural gas that has caused utilities to shift away from coal are both here to stay. Coal simply isn't the energy of the future.

Exports won't solve the problem
Some will point to China as the source of demand that will take the place of U.S. coal demand. To an extent that's true, but there are plenty of reasons to think China won't be a growing importer of coal.

The central government recently asked coal companies to keep production growth below 4% because of slowing demand and low prices. Coal inventories more than doubled in October from a year ago. China is able to grow coal production if it wants to, but the idea that exports to China will increase dramatically is a pipe dream.

I also don't believe that China's economy will continue to expand at the rate it has in recent years. Betting on China or any other emerging market to increase coal demand when inexpensive and cleaner alternatives are available is just not something I would do.

Returns get worse
For coal producers, hits to demand affect prices and volumes, which has a negative impact on the potential profit for investors.

You can see in the chart below that returns on capital have been falling dramatically over the past year. James River Coal (NASDAQ: JRCC), Arch Coal (NYSE: ACI), and Alpha Natural Resources (NYSE: ANR) have all swung into negative territory after having positive returns on capital to begin 2011. 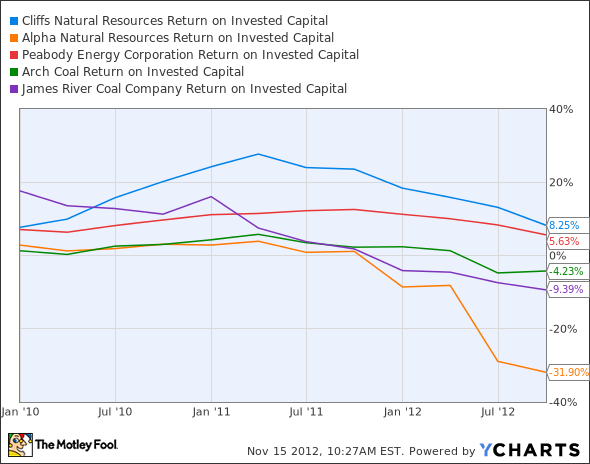 Peabody Energy (BTU) and Cliffs Natural (CLF 1.98%) are both slightly positive but the trends still aren't in the right direction. These two companies have remained profitable largely because they have more exposure to metallurgical coal, which doesn't have the same competitive forces as thermal coal right now.

Foolish bottom line
The macro trends simply aren't in favor of coal companies, even if their stocks look like good values right now. Coal is being replaced by natural gas domestically and even in emerging markets there's a focus on cleaner alternatives to coal.