Investors aren't quite sure what to make of Apple's (NASDAQ:AAPL) December quarter.

On one hand, revenue is all but guaranteed to set all-time records. The company's own lowball guidance calls for $52 billion in sales, topping the current record of $46.3 billion. However, once you move past the top line, increased costs are expected to lead to gross margin contraction and -- gasp! -- maybe even negative earnings growth.

Of course, once you start working your way down from top-line revenue, the first stop on your journey to the bottom line is gross profit. Gross margin has been on the decline for the past couple quarters, after topping an incredible 47% in the first fiscal quarter. 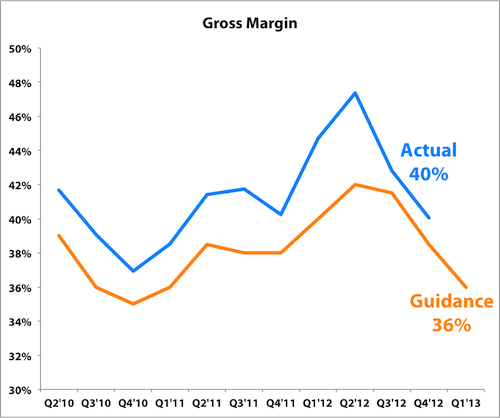 The December quarter is guiding gross margin to just 36%, primarily due to the high cost curves that newly redesigned products face when they're first launched. You know, as in, practically all of Apple's product families.

Right now, more than ever, Apple needs as much help as it can get with maintaining gross margins until it can ride down the cost curves and gross margins can reexpand. Too bad it can't count on frenemy Samsung for any assistance in this department.

All your chips are belong to us
Recent reports suggest that the South Korean conglomerate is jacking up prices on Apple for its A-chips, which are manufactured in Samsung's facilities in Austin, Texas. Samsung has recently plunged billions of dollars into its chip plant, and Apple's newest chips are built on Sammy's 32-nanometer manufacturing process.

Samsung has reportedly boosted its fabrication rates by as much as 20%, which is plenty of reason why Apple may be considering moving its business to Taiwan Semiconductor Manufacturing (NYSE:TSM) next year for its 20-nanometer node for quad-core chip production. Rumors of Apple tapping Taiwan Semiconductor have persisted for years, but it seems investors might actually be getting close to realization.

Munster math
Everyone's favorite Apple analyst, Gene Munster, has come out with some thoughts on Sammy's price-jacking ways. Munster figures that the price increases make sense in light of the escalating competition between the two, and agrees that a move to Taiwan Semiconductor or another contract chip manufacturer also makes sense.

Since the processor comprises anywhere from 6% to 9% of the total component cost in a given iDevice, a 20% increase could translate into a whopping 1% to 2% hit on Apple's gross margin. That's an enormous impact on corporate-level margins related to a single component.

Let's dig into this a little deeper using recent bill-of-material (or BOM) estimates from iSuppli.

Munster bash
While Munster has a solid track record with all things Apple, his estimates on the negative impact seem a little high to me. The entry-level models generally carry the lowest gross margins, while upselling storage configurations typically translates into higher gross margins for Apple. That means it can potentially sacrifice more to component costs if forced to.

The 50 basis point hit for the entry-level iPhone 5 stands out as significantly below Munster's 1% to 2% estimate. The iPhone carries disproportionate weight in overall results, and the latest model would see the smallest reduction in gross margin under a 20% processor price increase.

It's also unclear if this price hike applies uniformly among all A-chips that Samsung produces, or if it's primarily related to the newest 32-nanometer processors. Any price hike is certainly bad news for Apple's juicy gross margins, but I don't think we're talking about a 2% hit from Sammy alone.