Every investor can appreciate a stock that consistently beats the Street without getting ahead of its fundamentals and risking a meltdown. The best stocks offer sustainable market-beating gains, with improving financial metrics that support strong price growth. Let's take a look at what Suncor Energy's (NYSE:SU) recent results tell us about its potential for future gains.

What the numbers tell you
The graphs you're about to see tell Suncor's story, and we'll be grading the quality of that story in several ways.

Growth is important on both top and bottom lines, and an improving profit margin is a great sign that a company's become more efficient over time. Since profits may not always grow at a steady rate, we'll also look at how much Suncor's free cash flow has grown in comparison to its net income.

A company that generates more earnings per share over time, regardless of the number of shares outstanding, is heading in the right direction. If Suncor's share price has kept pace with its earnings growth, that's another good sign that its stock can move higher.

Is Suncor managing its resources well? A company's return on equity should be improving, and its debt to equity ratio declining, if it's to earn our approval.

Healthy dividends are always welcome, so we'll also make sure that Suncor's dividend payouts are increasing, but at a level that can be sustained by its free cash flow.

By the numbers
Now, let's take a look at Suncor's key statistics: 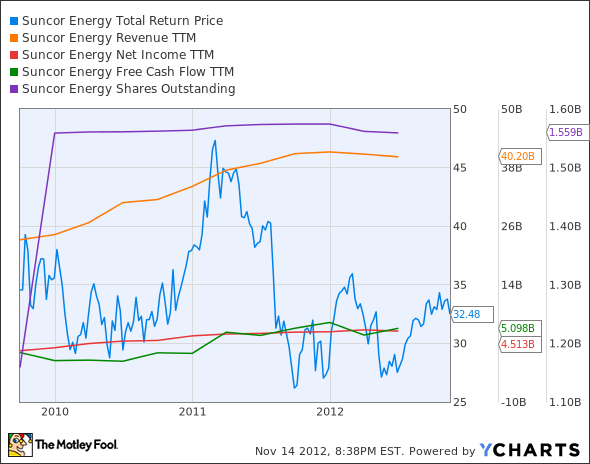 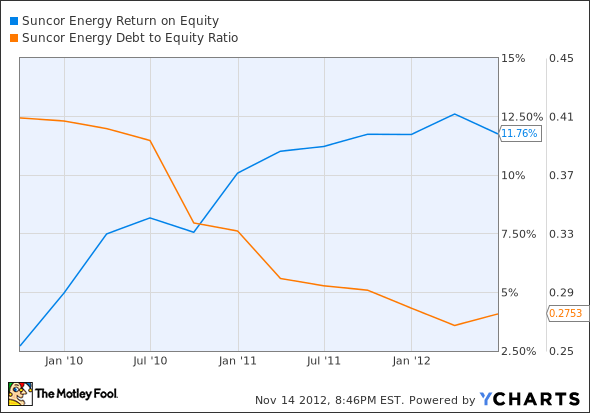 How we got here and where we're going
That's a pretty impressive performance, eh? Suncor's had its fair share of both ups and downs over the past three years, including the Libyan uprising in 2011 that curtailed oil production, and a major stake in the resource-rich Canadian Athabasca oil sands. Now that Libya seems to have (mostly) settled down, Suncor's got some strong tailwinds at its back. However, Suncor's one big weakness -- its reduced profit margin is the result of a writedown on Libyan assets -- has been its stock price, which has barely budged since late 2009, despite some wild swings. What will it take to get Suncor's stock moving again?

If anything pushes Suncor forward, it'll be the oil sands. Suncor currently produces 70% of its crude from Canadian oil sands, and is on track to increase its production in the region by as much as 17% from the start to the end of 2012.

Suncor's spreading the (rather low) risk of oil-sands development around by partnering with both diversified miner Teck Resources (NYSE:TECK) and oil major Total (NYSE:TTE). It's also agitated with pipeline company Enbridge (NYSE:ENB) to reverse the flow of two long-distance pipelines to bring oil from Canadian oil sands to the East coast of the U.S., although that seems unlikely to come to fruition. When it comes to developing exciting new energy sources, it can often be beneficial to work together. In this regard, Suncor's making plenty of good moves. Now, if only it can find a pipeline partner whose plans aren't so heavily opposed.

Putting the pieces together
Today, Suncor has many of the qualities that make up a great stock, but no stock is truly perfect. Digging deeper can help you uncover the answers you need to make a great buy -- or to stay away from a stock that's going nowhere.