Every investor can appreciate a stock that consistently beats the Street without getting ahead of its fundamentals and risking a meltdown. The best stocks offer sustainable, market-beating gains with improving financial metrics that support strong price growth. Let's take a look at what Taseko Mines' (NYSEMKT:TGB) recent results tell us about its potential for future gains.

What the numbers tell you
The graphs you're about to see tell Taseko's story, and we'll be grading the quality of that story in several ways.

Growth is important on both top and bottom lines, and an improving profit margin is a great sign that a company's become more efficient over time. Since profits may not always reported at a steady rate, we'll also look at how much Taseko's free cash flow has grown in comparison to its net income.

A company that generates more earnings per share over time, regardless of the number of shares outstanding, is heading in the right direction. If Taseko's share price has kept pace with its earnings growth, that's another good sign that its stock can move higher.

Is Taseko managing its resources well? A company's return on equity should be improving, and its debt to equity ratio declining, if it's to earn our approval.

By the numbers
Now, let's take a look at Taseko's key statistics: 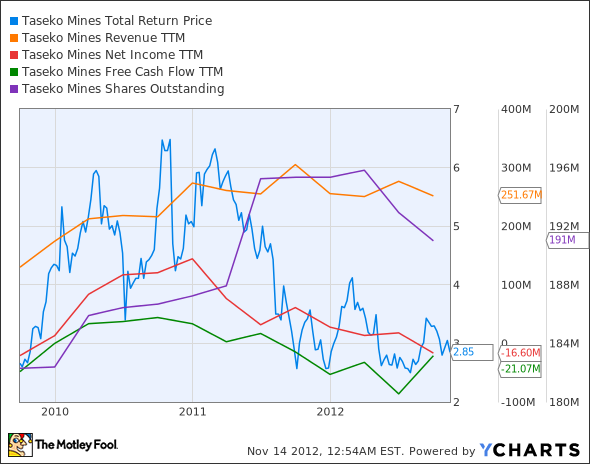 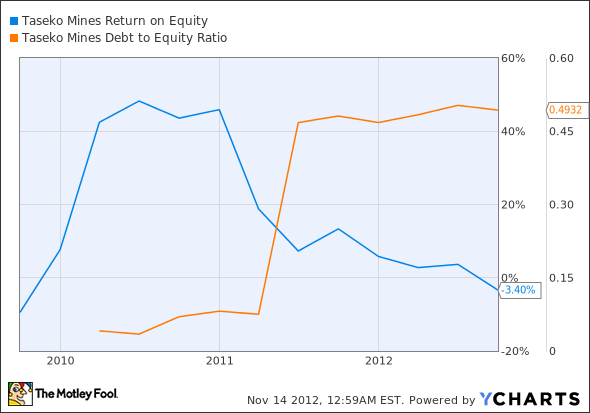 How we got here and where we're going
With a solid five of seven possible passing grades, Taseko comes out ahead in our analysis. However, investors may want to take these numbers with a grain of salt – in nearly every case, Taseko's improvements are the result of changing a negative number to a slightly better negative number. Taseko has returned to unprofitability in its latest quarter, and its free cash flow levels are still negative after three years. Will this change in the future? Let's dig deeper.

For the upcoming quarter, Taseko's projected a swing from negative to positive EPS, and its top line is also on track to improve after a sequential decline. That should help boost investor confidence in the up-and-down miner, which has most of its fortunes tied up in the swings of the global economy.

Weak steel demand and up-and-down copper prices both have contributed to crimp Taseko's progress this year. On the copper side, Taseko remains highly dependent on Chinese demand to drive copper consumption. Given the rather conflicting economic reports out of China this year (and which of these can you really trust, anyway?), it may be some time yet before the copper picture clears. The information we do have on the Chinese copper picture doesn't look good, as The Wall Street Journal reports on a large increase in copper inventories crowding Middle Kingdom warehouses. Surprisingly strong performances from Southern Copper (NYSE:SCCO) and Teck Resources (NYSE:TECK) show some resilience in this metal, but part of Southern's success lies in a big legal windfall, as well as an impressive production increase. If stockpiles are as high as the WSJ claims, Taseko may not be able to bank on higher copper prices to support its weakened molybdenum segment.

Taseko's molybdenum efforts are heavily dependent on steel production, which uses some 61% of global molybdenum output. Fellow molybdenum miner Molycorp (NYSE: MCP) has projected a stabilizing of the ore's price through 2012, but that hasn't stopped Molycorp's steep slide. Without steelmaker strength, stable prices mean little -- and steelmakers have been looking a bit soft in 2012. Crude steel production is unchanged from a year ago, with European and American output down, and Chinese output barely higher. American bellwether U.S. Steel (NYSE:X) projects lower steel production volumes and significantly lower shipments in the fourth quarter, which bodes poorly for molybdenum sales.

Thompson Creek Metals (OTC:TCPTF) has had an even rougher go of it due to global moly weakness, as it's been under significant funding pressure as it further works its way into Mt. Milligan. Without stronger demand, the entire molybdenum producing ecosystem is likely to remain depressed unless significant efforts can be made to transition away from the unloved element.

Putting the pieces together
Today, Taseko has some of the qualities that make up a great stock, but no stock is truly perfect. Digging deeper can help you uncover the answers you need to make a great buy -- or to stay away from a stock that's going nowhere.