End the practice of pharmaceutical companies paying other companies to delay launching generic versions of branded drugs. That's now the official position of the American Medical Association, which convened in Hawaii this week.

Want a second opinion? The Third Circuit Court of Appeals ruled in July that pay-for-delay arrangements are anti-competitive. The Federal Trade Commission has argued for over a decade that the practice is unfair and should be stopped. Congressional members from both major political parties have also spoken out against pay-for-delay deals.

Branded pharmaceutical companies and generic manufacturers disagree. In a recent article, I reviewed several reasons that the pharma companies think that pay-for-delay arrangements should be allowed to continue. Let's look now at the rationale for ending this controversial practice.

Who's paying the price?
Opponents of pay-for-delay deals point to an FTC study that these arrangements add $3.5 billion to annual drug costs. Who is footing the bill? You are -- assuming you're either a taxpayer or a buyer of prescription medications.

When generic drugs are available, costs can fall significantly. That's why Express Scripts (NASDAQ:ESRX),  the nation's biggest pharmacy benefits manager, aggressively emphasizes generic alternatives for its customers. If a brand pharmaceutical firm pays a generic manufacturer to hold off on marketing generic versions, though, customers and payers must pay the higher costs associated with brand-name drugs.

Some pay-for-delay arrangements cause even more problems. Pharmaceutical companies can compensate generic drugmakers by agreeing to not market their own authorized generic products after patent expiration. This means less generic competition -- and potentially higher prices to pay for the generics that are offered. When pharmaceutical companies market their own authorized generic versions, overall prices can be lower than they would otherwise have been.

For example, when Pfizer (NYSE:PFE) launched an authorized generic version of its blockbuster cholesterol drug Lipitor, the company reduced its prices below those of generic competitors. As a result, UnitedHealth Group (NYSE:UNH) was able to pass along those savings to its customers in the form of lower co-pays. Patients and payers paid less because of the authorized generic version.

A trust issue
Pay-for-delay opponents also claim that the arrangements violate antitrust laws. While previous court decisions didn't find any antitrust violations, the three judges on the Third Circuit Court of Appeals felt otherwise. Their opinion was that the pay-for-delay deals give monopoly powers to some pharmaceutical companies with weak patents.

If the practice were infrequent, antitrust concerns might be somewhat overblown. However, the FTC reports that more and more agreements are being made. 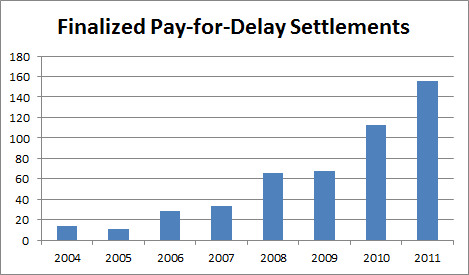 These numbers don't include settlements that potentially included pay-for-delay arrangements. Including those brings the 2011 total to over 180.

Foolish take
There is no question in my mind that pay-for-delay adds to the already overwhelming drug costs in the U.S. The practice can also have the appearance, whether deserved or not, of being shady.

On the other hand, pharmaceutical companies deserve to enjoy legitimate patent protection like companies in other industries do. The brand drugmakers and the generic manufacturers are only operating as best they can within the environment created by our nation's drug approval and patent processes.

My view is that the best answer lies in revamping these processes. I don't like pay-for-delay. Neither do I like the idea of stripping the ability for companies to make legal settlements when it's in the best interest of shareholders.

The Obama administration and Congress certainly have bigger fish to fry right now, but putting reformation of drug approval and patent laws on the list of to-do items makes a lot of sense. I know that making sense isn't always in the vocabulary for politicians in Washington. But the longer they delay, the more we all will pay.