Every investor can appreciate a stock that consistently beats the Street without getting ahead of its fundamentals and risking a meltdown. The best stocks offer sustainable market-beating gains, with improving financial metrics that support strong price growth. Let's take a look at what Monster Worldwide's (NYSE:MWW) recent results tell us about its potential for future gains.

What the numbers tell you
The graphs you're about to see tell Monster's story, and we'll be grading the quality of that story in several ways.

Growth is important on both top and bottom lines, and an improving profit margin is a great sign that a company's become more efficient over time. Since profits may not always reported at a steady rate, we'll also look at how much Monster's free cash flow has grown in comparison to its net income.

A company that generates more earnings per share over time, regardless of the number of shares outstanding, is heading in the right direction. If Monster's share price has kept pace with its earnings growth, that's another good sign that its stock can move higher.

Is Monster managing its resources well? A company's return on equity should be improving, and its debt to equity ratio declining, if it's to earn our approval.

By the numbers
Now, let's take a look at Monster's key statistics: 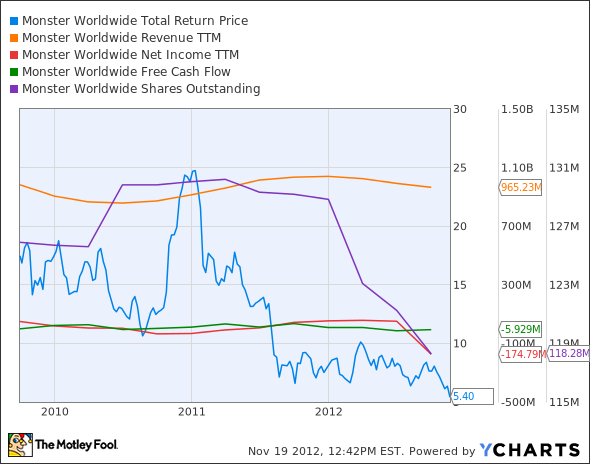 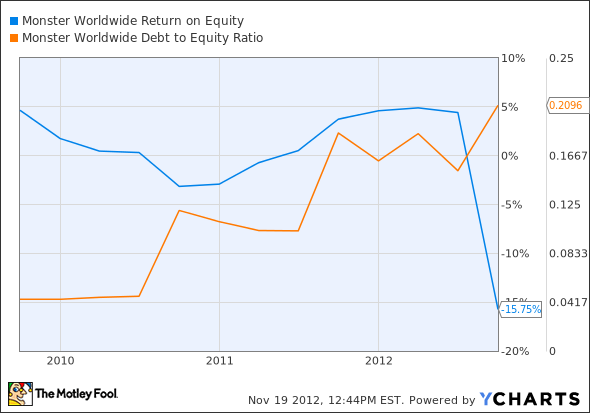 How we got here and where we're going
Monster fails to earn a single passing grade in one of our very rare complete whiffs. Several of these abysmal earnings-related drops came in Monster's most recent quarter, in which the company lost a massive amount on one-time restructuring charges. These numbers may get better by the next time we examine them, but how can Monster improve enough to earn a respectable grade?

There's the possibility of a buyout, which gave Monster's shares some buoyancy through the summer. One potential acquirer that keeps coming up is LinkedIn (NYSE:LNKD.DL). That buyout makes some sense, since LinkedIn's become the 800-pound gorilla in the online-jobs space. The problem is that LinkedIn may still go up against an 80-ton whale in the form of Facebook (NASDAQ:FB), which is making more concerted forays into job-hunting. Facebook's Social Jobs app actually taps into Monster's services, so there could be the possibility of a FaceMonster in the near future.

If a buyout isn't forthcoming, Monster's going to have a tremendous uphill battle ahead of it. Of the old-guard job-hunting companies, only Dice Holdings (NYSE:DHX) has actually grown its revenue over the past five years. Robert Half (NYSE:RHI), which is a more old-fashioned headhunter firm, generates less revenue today than it did five years ago -- but it's at least on an upward trajectory. Monster, meanwhile, has seen its revenue slide all through 2012. LinkedIn, which has only been public for a year and a half, has more than tripled its revenue since the start of 2011, a period in which Monster's revenue has only grown by 6%. Unless Monster's management manufactures some major momentum, there may not be much reason to hold on.

Putting the pieces together
Today, Monster has virtually none of the qualities that make up a great stock, but no stock is truly perfect. Digging deeper can help you uncover the answers you need to make a great buy -- or to stay away from a stock that's going nowhere.