So what: The decline in Monster stock in September can be attributed to two words: profit-taking. After several years of steady decline, the MWW ticker has climbed 59% this year. Through mid-August, Monster was up 78% year-to-date, and last month, as the S&P 500 index fell more than 2.5%, Monster shareholders took a bit of money off the table. Here's the company's impressive stock chart so far this year: 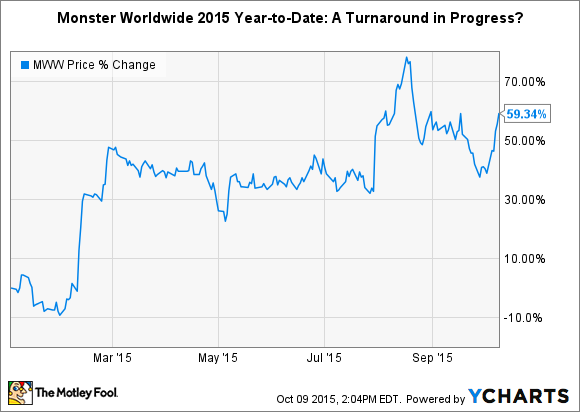 Monster is currently implementing a turnaround strategy built on two themes --one strategic, the other financial: "All the Jobs, All the People" and "Reallocate to Accelerate." "All the Jobs, All the People" seeks to scale the company's reach and expand its total addressable market. Monster plans to accomplish this goal through the introduction of new products, greatly expanding its user base, increasing its reach on social channels, and providing employers with more sophisticated tools for reaching qualified candidates.

"Reallocate to Accelerate" is Monster's catch-all term for cutting expenses and improving productivity. So far this year, the company has charged $26.2 million to this program for such items as employee reductions, lease termination expenses, and general administrative cost initiatives. This equates to about 7% of total sales. Monster anticipates incurring another $2 million to $3 million in costs for this program throughout 2015 and expects to begin to realize the full impact from the savings beginning in Q4 2015.

So while the company's operating income was slightly negative ($3.5 million) in the first half of 2015, it should turn positive in the coming quarters. While management hasn't provided the following guidance, it's possible that Monster could produce a GAAP profit this fiscal year, versus 2014's $289.3 million loss, which included a $325.8 million impairment charge against goodwill.

Now what: Monster Worldwide does indeed seem to be making progress in turning its business around. Although margins are improving, the company will have to start growing revenue again before the current strategy is deemed a complete success. But so far, it's been a good year to take an optimistic position on the global employment giant's prospects.