Please ensure Javascript is enabled for purposes of website accessibility
Log In Help Join The Motley Fool
Free Article Join Over 1 Million Premium Members And Get More In-Depth Stock Guidance and Research
By Daniel B. Kline - Mar 7, 2016 at 8:43PM

The company faces questions about what its business will be going forward.

Overall it was a lousy February for the service. Monster stock closed Jan. 29 at $4.99 and roughly held its ground until Feb. 10, the day before earnings, but after the report it dropped to a $2.72 close on Feb. 11 eventually closing the month at a still-dismal $2.98 share price, a 40.28% drop, according to data provided by S&P Global Market Intelligence. 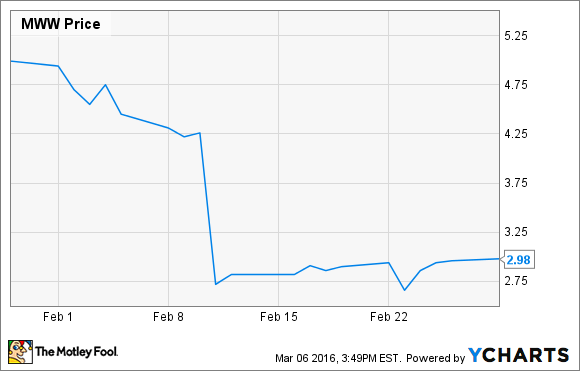 While the overall profit number was actually a little bit encouraging, the fourth quarter results were pretty dismal. Monster reported revenue from continuing operations of $159.2 million, a decrease of 6% at constant currency and 9% at actual rates compared to Q4 2014. Revenue from the company's Careers -- North America operations decreased 8% year over year to $112.1 million while the $47.1 million brought in from Careers -- International was down slightly year over year at constant currency and decreased 11% at actual rates.

So what: It's not so much about these results, but the lingering questions about Monster's ongoing business operations they raise. The company is operating in a very different market than it used to where social media has grown in importance which has forced it to adapt. These numbers are not awful, at least not bad enough to deserve a 40% drop in share price, but they could hint at the beginnings of a coming collapse.

Now what: Monster is working to adapt to the changing market it operates in. On the same day it released its earnings it also announced the expansion of Monster Social Job Ads, its programmatic social recruitment advertising platform. The program, which previously operated only on Twitter will now distribute job ads on Facebook. "Monster Social Job Ads is a first-of-a-kind recruitment advertising integration with major social platforms, using exclusive professional information to target potential active and passive candidates," the company wrote in its earnings release.