Shares of Intel (NASDAQ:INTC) hit a 52-week low today. Let's look at how it got here and whether the company is poised for a rebound.

We all know by now that the PC market is incredibly weak right now, and that much of Chipzilla's financial fate is inextricably linked to the PC market.

Last quarter saw revenue fall by 5% to $13.5 billion. That brought sales through the first three quarters up to $39.9 billion, which will make it particularly hard for Intel to put up top line growth this year relative to the $54 billion in sales it generated throughout 2011. It will need to have a blowout fourth quarter to avoid any top-line shrinkage, which seems unlikely with the tepid reception that Microsoft (NASDAQ:MSFT) Windows 8 is having.

Intel also recently announced the surprise retirement of CEO Paul Otellini, who will step down in May. That was sooner than many, including the board, were expecting. The company is now searching for a successor, including both external and internal candidates. This could be an important transition for Intel, which still needs to bolster its share in mobile markets.

How it stacks up
Let's see how Intel compares with some of its semiconductor peers, partners, and rivals. 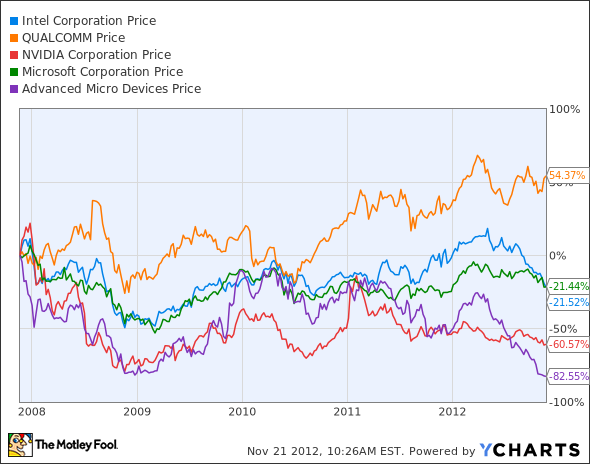 We'll include some fundamentals for more insight.

Source: Reuters. All figures from the trailing 12 months.

Qualcomm recently overtook Intel in market cap, a symbolic milestone that shows how important mobile growth is compared to traditional PCs. NVIDIA is also looking to diversify its graphics business and become a mobile chip powerhouse competing with both Intel and Qualcomm. Early Windows 8 sales are reportedly coming in below Microsoft's internal expectations. AMD was rumored to be exploring a sale, but the company shot down that speculation.

What's next?
Intel has largely missed out on mobile up until now, but a new CEO could potentially put together a more cohesive strategy on that front which could lead to a rebound. Intel can't rely on the PC market forever.