One of the more legitimate fears plaguing Apple (NASDAQ:AAPL) shares in recent months is the perceived shortage of iPhone 5 models to go around. Soaring demand is a good thing, but unmet demand is a bad thing.

Following reports from earlier this month that the new model was catching up with demand based on inventory checks at retail stores, Piper Jaffray's Gene Munster says the situation continues to improve dramatically. The analyst and his team have taken to calling 100 different Apple Stores every night to gauge inventory for AT&T (NYSE:T), Verizon (NYSE:VZ), and Sprint (NYSE:S). Munster then tracks the percentage of stores that have stock on each network. 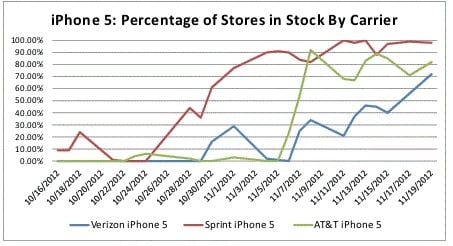 Sprint models remain abundant, with 92% of stores having units, while Verizon iPhone 5 availability is now up to 72%. I focus more on AT&T's figure since it remains the dominant domestic iPhone carrier, and its availability is now up to 82%. Munster even believes that within the next two weeks, consumers will be able to waltz into most Apple Stores and pick up a model without much issue. There's only about 250 domestic Apple Stores, so a sample size of 100 is fairly representative.

In addition, Apple's website is now quoting shipping times of "just" two weeks. That's still a bit of a wait, but an improvement over the three- to four-week shipping times seen up until now.

Apple's been facing supply constraints for various product families, including the iMac and new iPad Mini, but the iPhone is by far the most important at half of all Apple sales. Shortages related to the iMac would have a negligible affect on results since desktops are less than 4% of revenue, but investors will definitely feel it if the company doesn't catch up with iPhone demand.