Gold's unique properties and ancient monetary pedigree impart upon the metal a very special value among the suite of mined resources. And among the known economic deposits of gold scattered across the earth, one company's treasure stands out with a special value all its own.

Pretium Resources (NYSE:PVG) conducted 100 kilometers of exploration drilling during 2012 within the aptly named Valley of the Kings portion of its flagship Brucejack Project in northwestern British Columbia. As a result of continued bonanza-grade success in that campaign, Pretium released an updated resource estimate this week that grew indicated resources by 66% to reach 8.5-million ounces of gold! Before I gobble my first bite of gravy-slathered stuffing on Thursday, I may have to add Pretium's growing gold bonanza to the long list of blessings for which I am thankful this year.

Pretium's massive, district-scale claim block covers more than 90,000 hectares in some of the world's most prospective real estate for gold. The legendary Eskay Creek mine, just over 20 kilometers away, yielded truly astonishing grades of gold and silver in its day for Barrick Gold (NYSE:GOLD). And adjacent to Pretium's land package, Seabridge Gold (NYSE:SA) has identified one of the world's largest undeveloped gold projects with monster reserves of 38.2-million ounces of gold and nearly 10-billion pounds of copper. On the following claims map, which shows Pretium's huge claim package in blue, Seabridge's Kerr-Sulphurets-Mitchell (KSM) project sits immediately to the left (West) of Snowfield and Brucejack. 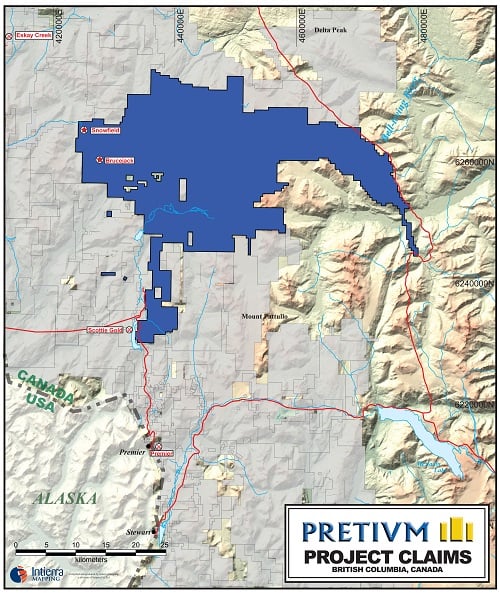 How Pretium makes the grade

Although Pretium's Brucejack project is just a stone's throw away from Seabridge's KSM, in all the ways that matter these project are truly worlds apart. KSM's large-scale surface operation remains sub-economic (or at best barely economic) even at today's elevated gold prices, while Pretium's small-scale underground mine promises hearty, low-risk returns on a much smaller outlay of capital. But don't let the relative small scale of the proposed mine at Brucejack mask the operation's meaningful bounty! If you're wondering how Pretium will produce significant volumes of gold from an operation that would be 98% smaller in scale than that envisioned by Seabridge Gold just next door, the answer lies in Pretium's extraordinary gold grade.

As the following graphic from fellow high-grade sensation Sabina Gold & Silver (OTC:SGSVF) reveals, Pretium's Brucejack asset towers over all major Canadian gold deposits (including those already producing) with respect to average gold grade. Not even Goldcorp's (NYSE:GG) phenomenal Red Lake mine in Ontario -- an operation I discuss in my recently completed research report on Goldcorp (click here to access the report) -- can lay claim to a superior grade! 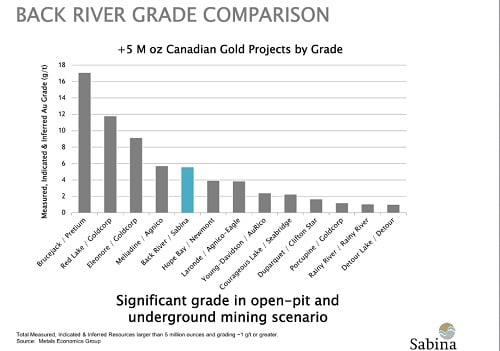 With 16.4 grams of gold in each tonne of ore in indicated resources at Brucejack's Valley of the Kings, Pretium is on the fast track to building a mine that promises a special sort of profitability for shareholders. When Pretium releases its feasibility study during the second quarter of 2013, Fools can look for an internal rate of return that will far exceed the already robust return of 29.8% (pre-tax) contemplated by the preliminary economic assessment (PEA) released back in February. The project's clear-cut economic feasibility is a direct product of the asset's superior average gold grade, and those bonanza grades warrant a premium asset valuation that is not presently reflected in the stock... not by a long shot!

High-grade treasure without a high-grade price tag
I remain amazed by what I perceive as the market's glaring failure to properly value this expanding underground treasure, and my selection of Pretium's stock as one of the premier investment vehicles for gold remains a valuation-focused call even as remaining exploration potential holds the promise of meaningful organic growth still to come. You see, the market has seen fit to grant Pretium a capitalization of just $1.2 billion; a far cry from the net present value of $2.26 billion proposed by the PEA.

That PEA envisioned a 1,500-tonne-per-day underground mine extracting a total of 11.8-million tonnes of high-grade ore over a 24-year mine life. Given Pretium's new indicated resource of 16.1-million tonnes of similarly high-grade material -- just in the Valley of the Kings portion of the project alone -- it's clear that the company has added substantial value to the project in advance of the full-fledged feasibility study (expected during the second quarter of 2013). That feasibility study will contemplate a 2,700-tonne-per-day operation, fully 80% larger in scale than the PEA scenario outlined above!

Under the skillful direction of President and CEO Robert Quartermain, who extricated the Brucejack and Snowfield properties from Silver Standard Resources (NASDAQ: SSRI) in a memorable strategic shuffle, Pretium also added meaningful shareholder value to Brucejack this year by multiplying in spades the degree of confidence behind each successive estimation of mineral resources. After scrutinizing in some detail the estimation parameters employed along the way, I find that Pretium's stated resources represent an uncommonly (and refreshingly) conservative interpretation of the available data.

As a delighted shareholder, therefore, I approach the pending feasibility study with the knowledge that the project's calculated value will derive from ounces and ore grades that are extremely likely to pan out as proposed. This represents, in my view, a very major de-risking of the project; and another rationale for ascribing special value to Pretium's gold bonanza! With a market valuation for the stock that equates to just over $140 for each of the superior quality ounces in indicated resources just at Valley of the Kings alone, I fully expect a strong showing from these shares as the special value of Pretium's bonanza shines through.