While the European debt crisis has caused investors to flee from many of the stocks from that continent, there are opportunities for Foolish investors with a long-term outlook. Phone companies, for one, are excellent investments for profiting from the growth of an economy. Among them is Telefonica (NYSE:TEF), the largest Spanish company by market capitalization and the fifth largest mobile network provider in the world. Down more than 20% for the year, Telefonica is starting to recover, with a share-price increase of almost 10% over the past six months.

Instrumental in this boost has been a focus on deleveraging. Moving to shore up its finances, Telefonica has reduced its debt by about 10% since the end of June, a move that facilitated profit growth in September of 24% and that helped generate far greater cash flow and improve the company's liquidity position. Foolish investors should look for future gains from Telefonica, as the deleveraging has earnings-per-share growth surging on a quarterly basis, with a 26.4% year-over-year jump in net income for the first nine months of 2012.

Improving profit margin
This deleveraging is greatly improving Telefonica's margins, too. Its profit margin has increased as total liabilities and long-term debt have decreased. 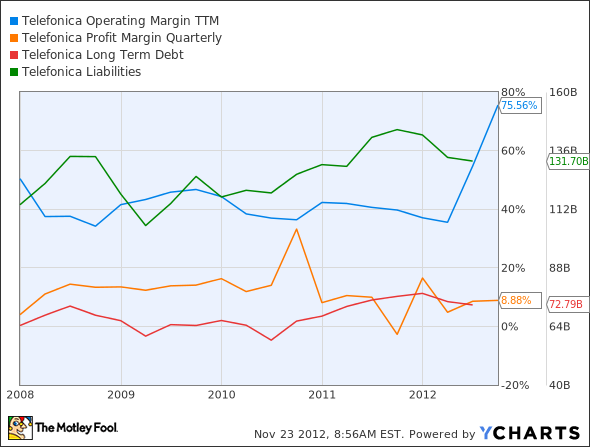 Superior operating margin
The net operating margin, critical for gauging how much cash is left over after the costs of running the company are calculated, has drastically changed for Telefonica, to the point that it's now far superior to phone companies such as Verizon (NYSE:VZ), AT&T (NYSE:T), Windstream (NASDAQ:WINMQ), and CenturyLink (NYSE:LUMN). 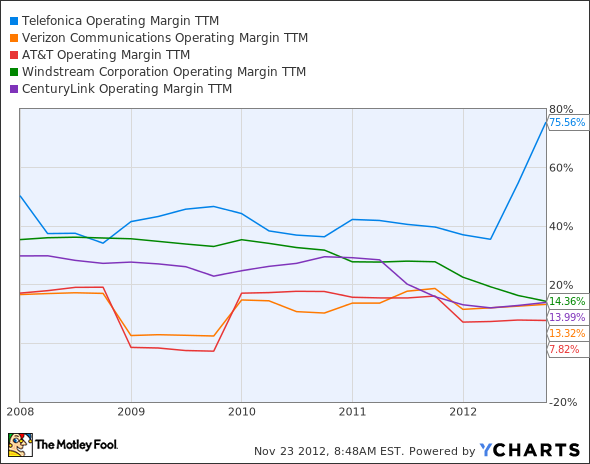 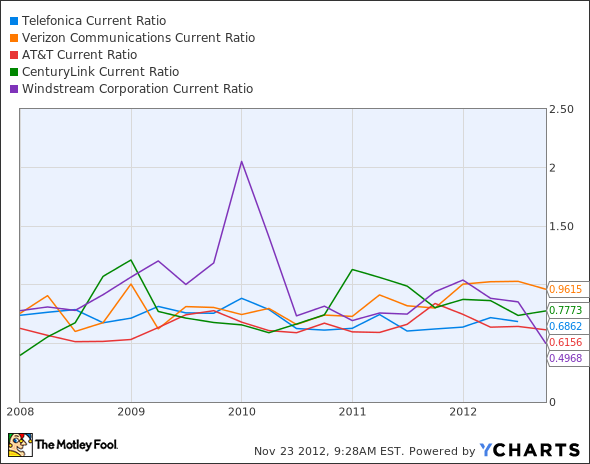 Share price rises as liabilities fall
Not surprisingly, Telefonica's share price has been rising as liabilities have fallen. Expect that trend to continue as margins get even better, resulting in greater net income. 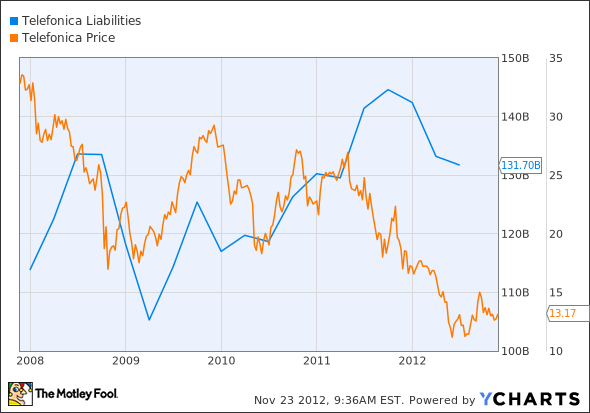 What a Fool believes ... for the future
The debt crisis in Europe is far from being over, and that's a major reason a blue chip such as Telefonica can sell at a P/E ratio of just 2.53. In 2007, the P/E was over 20. Management also responsibly terminated a once-healthy dividend, and the cash left over from that decision has helped to stabilize the balance sheet.

Eventually, the dividend yield and double-digit P/E ratios standard for major phone companies will return for Telefonica. The deleveraging now taking place is a major step in that direction, setting the stage for strong returns for Foolish investors who buy Telefonica as it recovers.