Bargains after Thanksgiving aren't just on the shelves at the local Wal-Mart or online at Amazon.com. Apple (NASDAQ:AAPL), Intel (NASDAQ:INTC), and Microsoft (NASDAQ:MSFT) are selling at a discount after their shares plunged in recent trading. And for Foolish investors, each has significant potential for long-term gains.

Apple
After reaching a record high share price of $701.87 and a market cap of $663 billion after the introduction of the long-awaited iPhone 5 in September, Apple has slid almost 15%. Short-term, though, the holiday season is looking to be strong for Apple. And long-term, the opportunities in China alone are reasons to be bullish. The iPhone, Apple's most profitable product, has only a 12% market share in China.

When China Mobile, the world's largest mobile phone company, begins to sell the iPhone 5, Apple will enjoy greater growth in the People's Republic. Countries such as India, which has the world's largest middle class, are untapped growth areas, with millions of consumers ripe for the taking. Nokia (NYSE:NOK), Research In Motion (NYSE:BB), Samsung, and others all have a presence in these areas, but each has substantial problems that greatly weaken its ability to deny market share to Apple.

Intel
Intel is down because of a weak position in the mobile phone sector, although it continues to dominate in personal computers. The surprise announcement that CEO Paul Otellini will step down has also lowered the price in the short term. These are both opportunities for long-term gains for Foolish investors.

While Intel has only about 1% of the market for mobile devices, Windows 8 tablets and smartphones could move the needle in a big way, providing tremendous growth opportunity. Consider that when Apple introduced the iPhone in 2007, Nokia and Research In Motion ruled the smartphone domain. Since then, Apple has come to dominate smartphone sales while Research In Motion and Nokia have descended into virtual irrelevance. A similar move could take place for Intel in the mobile device market. 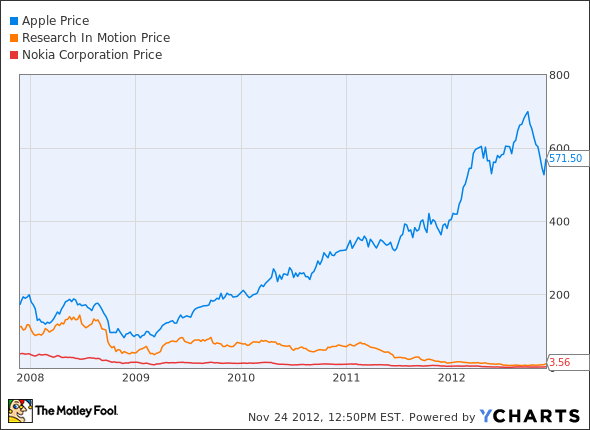 Microsoft
Before Apple, Microsoft had the largest market cap of any stock, checking in at $616 billion back in 1999. The new Windows 8 phone should help pull this share price back up. According to the International Data Corporation, Windows Phone market share will almost quadruple by 2016. Microsoft also has a huge cash reserve, peerless business relationships, strong leadership, and other institutional assets.

Growth, value, and income in each, at a discount
Apple, Intel, and Microsoft all have features to appeal to growth, value, and income investors. The dividend yield for each is around the 2% average for a member of the S&P 500 Index, or much better. For value investors, the price-to-sales and price-to-book ratios for each is below, or compares favorably with, the industry average. Growth for the three companies is projected to be higher than the industry average, too.

A Fool's Christmas list
Foolish investors know it's impossible to time the market. However, when industry leaders such as Apple, Intel, and Microsoft have bullish futures and are selling with a strong dividend and valuations below the averages for a sector, it's time to put those stocks on the shopping list to capture some long-term gains.