The cratering of Apple's (NASDAQ:AAPL) share price has been one of the most discussed storylines in all of technology over the past quarter. Having sagged some 18% since hitting an all-time high in early September, the iEverything maker's stock now sits firmly in bear territory. At these diminished levels, Apple's supporters regard it as an even more resounding buy, but the rest of the market is still understandably skeptical. However, a series of data points have recently emerged that once again recast Apple's current valuation, which many thought was even a steal at around $700, as one of the best deals in all of technology.

PC powerhouse
Anyone familiar with the particulars of Apple is aware of its enviable position in the smartphone and tablet market. However, it's Apple's PC market that's proving to be an enjoyable surprise, especially among the business segment, which is increasingly defecting from the likes of Hewlett-Packard (NYSE:HPQ) and Dell (NASDAQ:DELL.DL).

Take the third-quarter PC market share numbers, recently released by Gartner. Even as the PC market remains in a rather moribund state, Apple's managed to tally some impressive wins. The headline number won't blow you away -- Apple increased its total shipment of Macs by only 1% on a per-unit basis in its most recent quarter, but that was while the PC market as a whole shrank 8%. This also marks the 26th straight quarter in which Mac sales have outperformed the broad PC market. 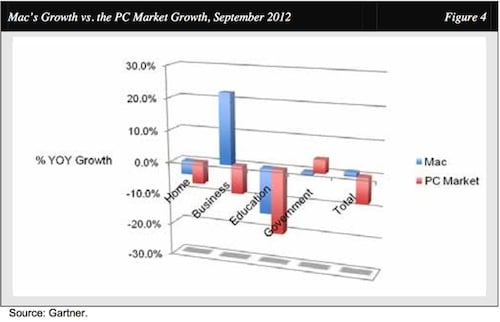 The real standout in this trend is Apple's success in the enterprise space. In the third quarter, its shipments to businesses surged an astonishing 49.4%. That's even more impressive when you consider that overall PC shipments to U.S. businesses contracted during this same period of the tune of 13.3% year over year.

The time is now
It's another feather in the cap for Apple's bull thesis that corporations are increasingly allowing their workers the freedom to choose laptops and workstations beyond Microsoft's (NASDAQ:MSFT) dominant Windows franchise. Of course, the recent release of Windows 8 could help reverse this trend in the short term, but the longer-term dynamic remains in place: Workers cherish the easy-to-use experience that's an Apple hallmark.

Analysts have an average estimate of $762 for the Cupertino powerhouse's shares, giving it a 33% upside from today's price. Apple also finds itself going into the all-important holiday season with a completely refreshed lineup of its dominant products and with its newly launched iPad Mini, and we know many key consumer segments still put Apple's products at or near the top of their holiday wish lists. This is a company trading at a P/E of 12.9, versus the 15.5 multiple of the broad markets, and sitting on more $100 billion in the bank. Couple that with its dominant roster of products in some of the best growth markets in all of tech, and the question for investors to ask is not "Is Apple a buy?" but rather "Why isn't Apple a buy?"