Best Buy (NYSE:BBY) is moving to replicate the RadioShack (NYSE: RSH) model in consumer-electronics sales with smaller stores located in strip malls. The goal is to open 800 of these units in areas  littered with vacant buildings. It's difficult to see how Best Buy will fare any better against competition from Wal-Mart (NYSE:TGT), Target (NYSE:TGT) and Amazon.com (NASDAQ:AMZN) than RadioShack has, though. Now trading at around $1.90, RadioShack is down 80% for 2012. Let's take a closer look at Best Buy's prospects with this strategy.

There's a reason for all those vacancies
Two reasons Best Buy is taking this step are the cheap rent and abundance of vacancies. But those are also two major reasons the strategy is most likely doomed. Rent is cheap because of a lack of demand from businesses wanting to operate from a strip mall. There aren't enough customers patronizing strip malls to let the merchants keep paying the rent. Don't expect the situation to improve just because a mini-Best Buy shows up.

Current market trends suggest that Best Buy won't hold on to its perch. Not only are sales growth and earnings-per-share growth falling for Best Buy, but the analyst consensus is also that those figures will continue to decline in the future.

Big stores, small stores, same problem
Best Buy just reported earnings that showed same-store sales falling for nine of the past 10 quarters. Comps continue to decline for RadioShack, too. Both companies face the same problem, and it has nothing to do with square footage. "Few people are going to be willing to pay $80 for a cable in-store when they know they can buy an equivalent product online for $5," warned Rakesh Agrawal, an analyst with consulting firm reDesign Mobile. That's why Best Buy's net income has been plunging. 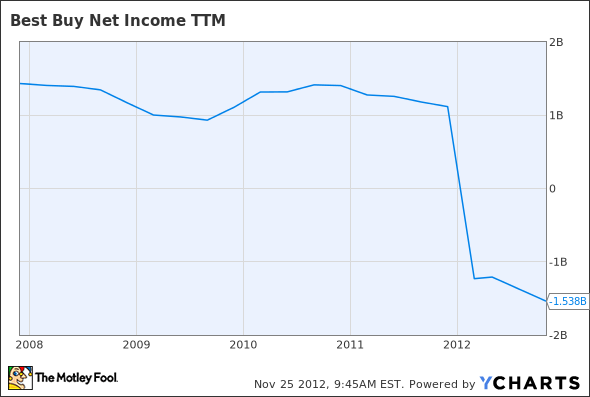 And copying the RadioShack business model probably won't work, considering RadioShack's own net income has plummeted over the same period. 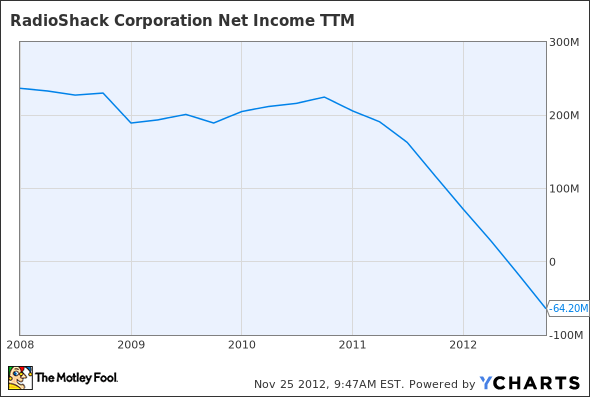 Both companies have watched their cash positions deteriorate as a result. Best Buy is barely profitable while RadioShack is losing money, and both are loaded with debt. 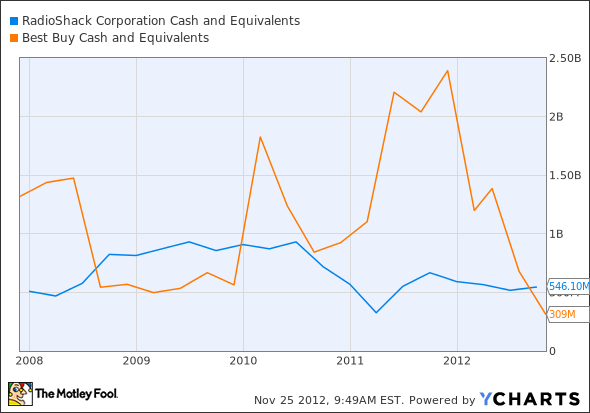 A best buy? Not for Fools.
Down almost 50% for 2012, Best Buy's share price is following RadioShack's trajectory. For the Foolish investor looking to profit from retail growth, Wal-Mart, Target, and Amazon offer everything that Best Buy doesn't in terms of expanding sales and EPS growth. Smaller stores just won't fix Best Buy's decreasing sales and revenues.