Apple (AAPL 0.79%) and Facebook (META 2.79%) have taken their relationship to new heights this year, what with Apple integrating the social network directly into both of its operating systems and Facebook going native with its iOS app. The two giants have just gotten a tiny bit cozier.

Facebook has announced that iTunes gift cards are now available on the company's Gifts platform. Facebookers can send various increments to friends along with specific song or album recommendations to pick. 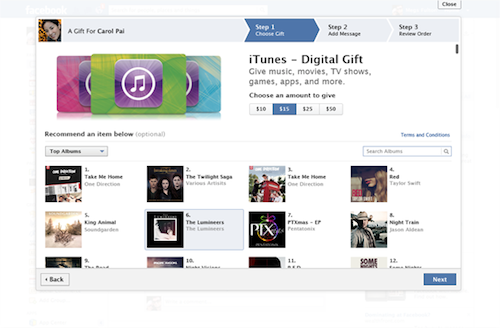 This new offering isn't a particularly huge win for Apple, although it will certainly help the iTunes business. Sales from the iTunes Store grew from $5.4 billion in 2011 to $7.5 billion in 2012, in part driven by the App Store as well as continued growth of the content catalog. However, Apple has always maintained that it operates iTunes slightly above break-even, so the storefront doesn't contribute a lot to the bottom line.

Facebook just recently launched its Gifts platform that has incredible promise for the social network's e-commerce future. That's Amazon.com's (AMZN 1.96%) domain being encroached upon as the current king of the e-tail hill. Amazon naturally has numerous ways to send gifts to friends and family, but most of them inevitably tap into Facebook in some form or fashion anyway. 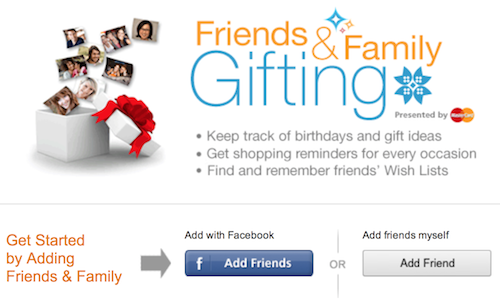 You can add Facebook friends on Amazon or share your Amazon Wish List on Facebook. Facebook might as well step in directly and explore its e-commerce potential. The social aspects will certainly appeal to retailers, including Apple. It's not hard to imagine a time in the not-too-distant future when a user can peruse a wide catalog of various gifts from a wide range of companies and gift them directly through Facebook with just a few clicks.

Adding iTunes into Facebook Gifts adds a new sense of legitimacy to the burgeoning platform. This is just the beginning.

Fool contributor Evan Niu, CFA, owns shares of Apple. The Motley Fool owns shares of Apple, Amazon.com, and Facebook and has the following options: long JAN 2014 $20.00 calls on Facebook. Motley Fool newsletter services recommend Apple, Amazon.com, and Facebook. We Fools may not all hold the same opinions, but we all believe that considering a diverse range of insights makes us better investors. The Motley Fool has a disclosure policy.