Tech titans Google (NASDAQ:GOOGL) and Microsoft (NASDAQ:MSFT) may not see eye-to-eye on a lot of things, but here's one thing they can agree on: mutual rival Apple (NASDAQ:AAPL) is out of touch. Apple may have made incredible strides over the past decade with touch interfaces and interactions, but there's decidedly one area where the company has decided not to go with touch: traditional PC form factors.

If it turns out that consumers truly do want touch-optimized traditional PCs, then this might be an opportunity that Apple is missing out on. That's precisely what Microsoft has been banking on with Windows 8 as the operating system incorporates both traditional input methods like keyboards and mice as well as touch inputs.

Microsoft is ambitiously hoping that it can do both well, which is the basis of its "PC-Plus" strategy. By supporting the new tile interface as well as the legacy desktop in one operating system, Microsoft is betting that consumers truly desire the ability to go back and forth at the press of a button. That's in stark contrast to Apple's strategy, which is to separate the two paradigms: traditional input in OS X and touch input in iOS.

So far, Apple's approach is working well, and Microsoft's success or failure remains to be seen, as Windows 8 was just launched a month ago. Windows 8 OEMs are embracing a shotgun approach with form factors, just hoping something sticks.

Google: I'm with Mr. Softy
Google recently launched its $249 Chromebook built by Samsung that's positioned as a secondary computer "for everyone," and was followed by a $199 Chromebook from Acer. TechCrunch recently caught wind of a report from China Times that the search giant is preparing to launch its own first-party branded Chromebooks that feature touchscreens.

Adding a touchscreen would add to costs, so this rumored device would inevitably occupy a higher price point. That's a tricky trade-off since one of the most appealing aspects of buying a lightweight Chromebook has always been its lightweight price.

If these rumblings turn out true, that would mean both Microsoft and Google are exploring touch interfaces in traditional PCs. Is Apple out of touch?

I'm tired of this
Apple has previously said that its research in user interface shows that touch is best implemented in traditional PC form factors via the trackpad, since constantly having your arm up to interact with a vertical display quickly causes fatigue.

After visiting a local Microsoft store and playing with some of the all-in-one desktops with touchscreens running Windows 8, my arm started to get a little tired after several minutes of navigating a giant 27-inch display. The larger the display, the more pronounced this will be, as Windows 8 makes heavy usage of gestures from various sides so the user is constantly swiping from the top, left, and right to close apps, multitask, or open the "Charms" bar.

The alternative is to go back to the familiar mouse or trackpad, but that partially defeats the purpose of such a touch-optimized interface.

We've considered it
It's not as if Apple's never looked into the idea of touch-based Macs, either. Apple has already filed patents for an iMac with an additional hinge in its arm that would allow the computer to bend down and switch to a touch-based OS. 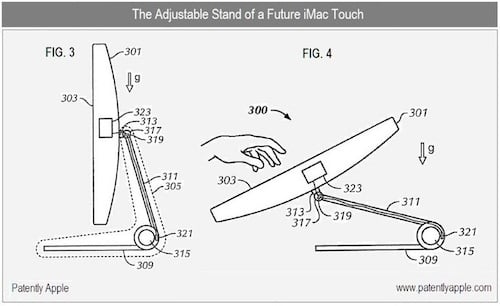 These were uncovered by Patently Apple over two years ago, and chances are Apple has some of these "iMac Touch" prototypes laying around in its top secret labs with armed guards patrolling the perimeter. A traditional PC that supports both traditional and touch input methods? Sounds exactly like Windows 8, except that Apple has clearly chosen not to go down that path.