That may not be the exact wording for the cliche, but it could very well be the new slogan for Linn Energy (OTC:LINEQ). Since its IPO back in 2006, Linn has transformed from a company with a handful of assets to a prominent player in the natural gas space. Much of the company's rise is associated with one thing it does better than most of its peers: buy assets.

Acquisitions and efficiency: a winning combination
OK, so saying that Linn is good at buying might be selling the company a bit short. Based on its recent history, though, it seems very proficient at buying more mature assets in proven fields and milking them for every last drop. According to Linn's CEO Mark E. Ellis:

One of the advantages to Linn's size and scale is that it allows us to make significant entries into new basins. Our goal is to efficiently operate and enhance existing production of these mature properties. ... We believe we are differential to our peers in our ability to quickly integrate acquired assets and new employees into our culture, and then continue to aggressively pursue additional accretive acquisitions.

The company has spent more than $3 billion acquiring new fields this year alone, with more than $2 billion of that money spent buying BP's (NYSE:BP) mature assets in the Green River and Hugoton Basins. Linn made many of these purchases by incurring more debt, which has sent the company's debt-to-equity ratios soaring. 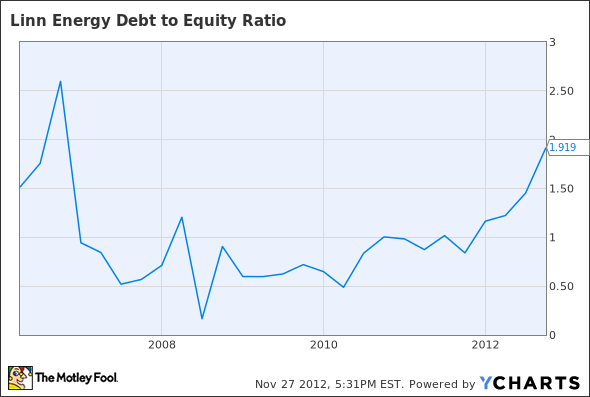 At first glance, last quarter's earnings might not paint too rosy of a picture, either. Linn has dropped its cash position to razor-thin levels, and sent its operational cash flow up in flames. But keep in mind that Linn realized big losses from derivatives trading this past quarter. These bad futures contracts don't necessarily reflect on the company's operational capacity.

Linn's ominous numbers may pose less of a problem than they seem to, because the company has been able to increase efficiency at, and raise the value of, its purchased assets. Since taking hold of the Hugoton Basin assets, Linn has completed 80 optimization projects, which have increased production by 3 million cubic feet equivalent per day for the entire field. Linn projects that its 2012 average daily production will be 106% more than 2011 totals for the entire company.

Linn might also be able to bring down its debt through its recent spinoff of its operating arm LinnCo (NASDAQ: LNCO). While raising $1.1 billion in LinnCo's IPO will go a long way for the company, it missed the proposed price range. According to the SEC filing, the LinnCo IPO will be used to pay down some of the company's debt, which will help bring that debt-to-equity ratio back down to a more manageable level.

A buyer's market
Meanwhile, Linn's recent buying binge may not stop anytime soon. On the contrary, with many competitors in the natural gas space reeling from low natural gas prices in 2012, Linn may be in the driver's seat again to make another purchase.

Not that it appears Linn will have any problem finding something worth purchasing. Its CFO, Kolja Rockov, recently said Linn could still be hunting for more properties: "The outlook for the acquisition market continues to be stronger than ever, as we believe there is approximately $20 billion to $30 billion worth of assets coming to the market within the next 18 months. We have positioned the Company well to take advantage of opportunities that may present themselves."

Linn only has a $7.7 billion market cap, so it is hard to imagine the company will be buying anything in the tens of billions of dollars. What this does mean, though, is that Linn will probably be able to get a good deal on anything coming available on the market.

These three companies have made it clear that some of their assets will be available:

Chesapeake Energy (OTC:CHKA.Q) will look to unload about $5 billion in assets to help clear up its balance sheets. This could be a very attractive partner to buy from, considering that Chesapeake recently sold its assets in the Permian Basin for $3.3 billion, even though the fields were valued in the $4 billion to $6 billion range.

Enerplus Resources Fund (NYSE:ERF) will let its leases in the Marcellus shale basin expire at the end of the year. This comes off a rather disappointing quarter where the company has decided to downsize while it finds a way back to profitability.

SandRidge Energy (NYSE: SD) is thinking about shuffling its asset deck and letting go of some of its plays in the Permian Basin as well. This comes off the news this year that the company just acquired Dynamic Offshore to get a bigger play in the Gulf of Mexico. SandRidge's assets in the Permian are rather productive fields, much of which contain oil. While liquids production has not been a strong point for Linn, SandRidge's Permian natural gas properties could still prove interesting.

There are several companies in the space, like Chesapeake, that need to make these sales to remain afloat. This could mean Linn has a very strong position at the bargaining table in the upcoming months.

What a Fool believes
Linn may be on to something here. With so many natural gas companies feeling the recent heat of low gas prices, Linn has been able to secure some strong assets across the board. With so many economic trends favoring an upswing in natural gas prices, the real economic benefit of all these activities could pay off soon. In addition, since the company is structured as a limited partnership, the high-yielding distributions, which stand today at 7.5%, make for a hefty income generator.

Linn is still a pretty young player in the market, so some investors might want some more stability in an energy stock. For those who need that stability and a hefty dividend to boot, then you should check out our free report on The One Energy Stock You Must Own Before 2014. To get your copy, start by clicking here!