Is it time to treat Apple (NASDAQ:AAPL) like an income and value stock yet?

Cupertino has been kind to growth investors over the last decade with a mind-boggling 7,200% return on investment. The Dow Jones Industrial Average (DJINDICES:^DJI) rose "only" 51% over the same 10-year period. A thousand dollars invested in Apple a decade ago would be worth 48 times more than the same fund dumped into a Dow-tracking ETF.

But share prices have fallen 22% from all-time highs set in September, and Cupertino even pays a dividend like some dusty old value stock.

Apple's 1.8% dividend yield isn't particularly generous, but small payouts really do add up over time. So exactly how important is the dividend to today's Apple investor?

First of all, Apple's yield is already richer than the payouts of seven of the 30 Dow stocks. Let's pick a basket of modest yielders from the Dow herd to use as models for Apple's potential payout future.

I'm going with Home Depot (NYSE:HD), Wal-Mart (NYSE:WMT), and IBM (NYSE:IBM) for this illustration. Some of these have occasionally yielded much more than 1.8% a year, but all of them also paid out a lot less in the mid-2000s: 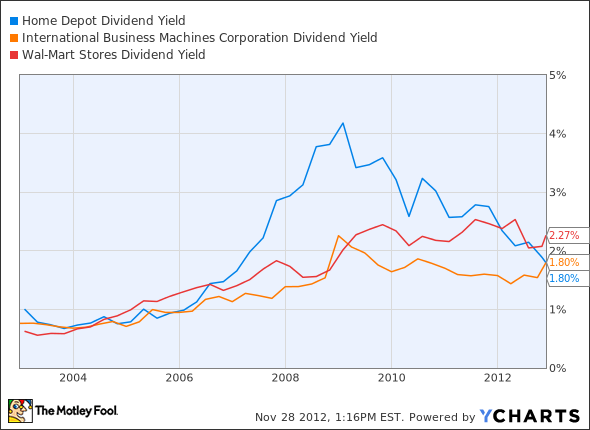 The biggest 10-year winner in this bunch, with or without dividends, is Home Depot. A dividend-free 144% return tacks on another 60 percentage points with dividends reinvested: 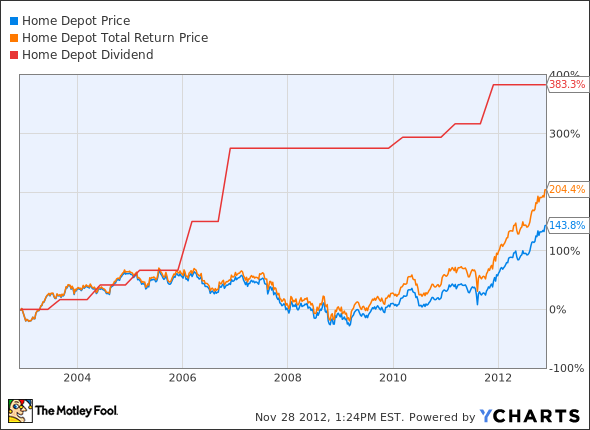 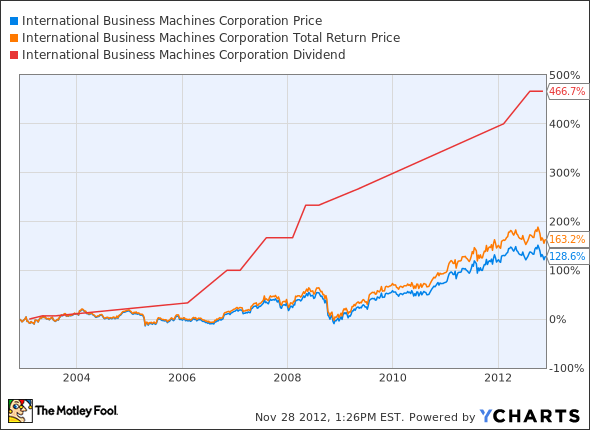 Sam Walton's retail giant is the runt of the litter, as the dividends add 23% on top of a modest 31% return. That's just enough to help the total return keep pace with the Dow's overall gains. 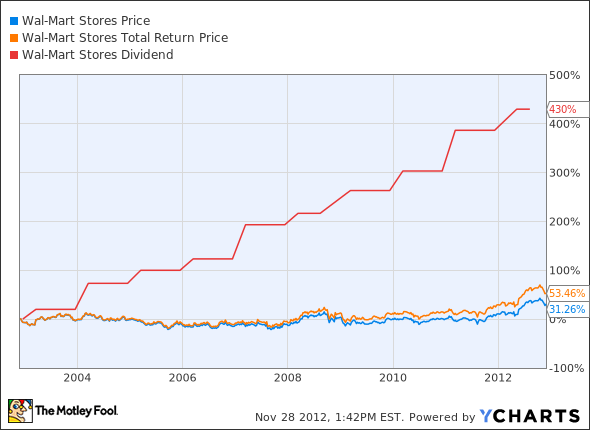 Would you be happy with Apple delivering a 30% dividend return over the next 10 years? The stock trades at roughly 13 times trailing earnings, which is in the same valuation ballpark as Wal-Mart and IBM. Both of these role models are respected income/value stocks, and Apple could keep that class of shareholders quite happy over the long run.

Also note that all of the model stocks we looked at just about quintupled their cash payouts in a decade. Cupertino has unmatched cash reserves and massive cash flows; its dividend boosts could very well leave these templates in the dust if Tim Cook gets serious about supporting income investors.