Microsoft (NASDAQ:MSFT) just launched Windows 8 last month, and recently said it has now sold 40 million Windows 8 licenses so far. Tami Reller, one of the two executives taking over Steven Sinofsky's former job, announced that tidbit at the Credit Suisse Technology Conference yesterday. That means the new operating system is currently outpacing Windows 7 upgrades. With Windows 8 now shipping, what will be Microsoft's next version of Windows look like?

Blue. At least that's the next-generation platform's code name, according to a recent report from The Verge. Blue represents an important strategic shift for one of Microsoft's key operating segments. Instead of releasing major upgrades with relatively hefty price tags every several years, Microsoft is supposedly interested in moving toward more regular upgrades every year. That applies to both Windows and Windows Phone.

A trip down two memory lanes

Historically, Microsoft has released major versions every two to three years. Windows XP had a longer shelf life, as Windows Vista was released five years later and was one of the most widely criticized releases.

Moving to an annual upgrade cycle would be quite a change for the software giant, and a strategy not unlike its rival from Cupertino. Apple's (NASDAQ:AAPL) software upgrade cycle has tended to be shorter, typically between one and two years ever since OS X was launched in 2001.

Margin matters
The big difference is that since Microsoft is purely a software company, it relies on its pricing power and unique role in the PC value chain to drive its generous gross margins, which are far higher than Apple's. 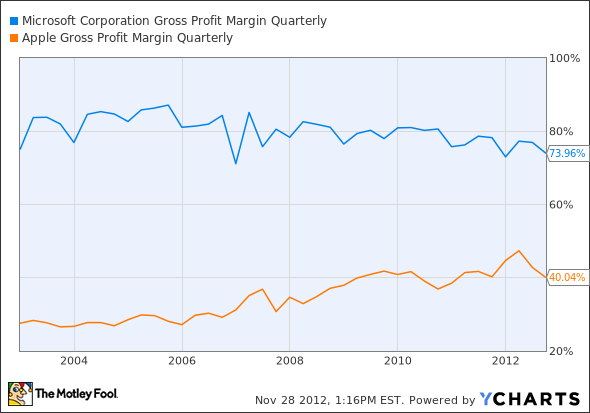 On the other hand, Apple bundles its software with its hardware and sells the whole package at a premium, which also allows it some flexibility with pricing its incremental updates lower. For example, 10.7 Lion that was released last summer cost only $29, and 10.8 Mountain Lion this year was just $20. That's one way that Apple is able to boost penetration of its newest OS, with Mountain Lion penetration near 10% after just two months.

Microsoft has a much larger installed base, so it takes a lot longer for it to increase penetration of its latest and greatest versions of Windows. The Verge's sources say that the next Windows release will come at low cost or potentially even be free to encourage upgrade activity. It's challenging for a company that makes primarily software to give away said software for free.

A new Microsoft
Shifting Windows Phone to an annual cycle puts it in line with iOS and Google (NASDAQ:GOOGL) Android, both of which get regular annual updates. Google is also pushing its new Chromebooks that run Chrome OS, which may not be much of a threat to Windows in its current state but it has some disruptive potential in the longer term. Google's even pinching Microsoft's business division.

In order to preserve the top line in the context of lower pricing, Microsoft would need to make up for it in volume. Or it could really try to be like Apple and integrate software and hardware into a single package. Oh wait, that's exactly what it wants to do, too.