With headwinds building to daunting proportions, major restructurings may be afoot.

To the list of those avoiding exposure to gold mines within the nation that once dominated the world's production of the metal, we may soon have occasion to add some of the South African producers themselves.

Gold Fields (GFI -0.34%) delivered a sobering assessment of its South African operations within its release of third-quarter earnings this week. The miner suffered 35,000 ounces of lost gold production relating to the substantial labor unrest that gripped the nation's mining industry over recent months, and another 30,000 ounces stemming from the tragic underground fire at the KDC West mine in July that claimed five lives.

As consolidated production recoiled to 811,000 gold-equivalent ounces at an unsightly cash cost of $916 per ounce, Gold Fields' quarterly earnings contracted by 42% from the prior-year period to just $171 million. Exacerbated by rising energy costs, and the labor concessions granted to bring the striking miners back to work, the cumulative headwinds confronting Gold Fields and its South African peers have grown so substantial that major restructurings appear unavoidable. To my knowledge, Gold Fields is the first to state the case explicitly, citing an increasing risk of "a significant restructuring of our South African operations in the near to medium term."

The way I see it, such restructuring initiatives could take any number of potential forms, including temporary idlings, permanent shaft closures, or even sales of assets between the country's major operators. They could also take the form of simple spin-offs of South African operations, much the way Barrick Gold (GOLD 1.88%) moved to isolate its operations on the continent with the launch of African Barrick Gold in 2010. If Gold Fields were to take the latter route, offering investors a vehicle with exposure to South African operations either removed or substantially reduced, I could become interested in the stock in a hurry!

As a gold investor, I've avoided exposure to South African operations outright. I even tried to warn hedge fund manager John Paulson back in 2009 that AngloGold Ashanti (AU 0.45%) might not be the best choice for a gold mining stock. The most hopeful call I could muster was "a Foolish thumbs-sideways," and sideways is precisely where that stock has drifted since that time. Had Paulson opted instead for Yamana Gold (AUY 2.02%) or Royal Gold (RGLD -0.10%) -- two stocks that earned my enthusiastic thumbs-up during that same time frame -- his investors would have enjoyed some truly golden returns. The following chart pits the performance of the two principle South African gold producers against my preferred selections, from May of 2009 through the present. 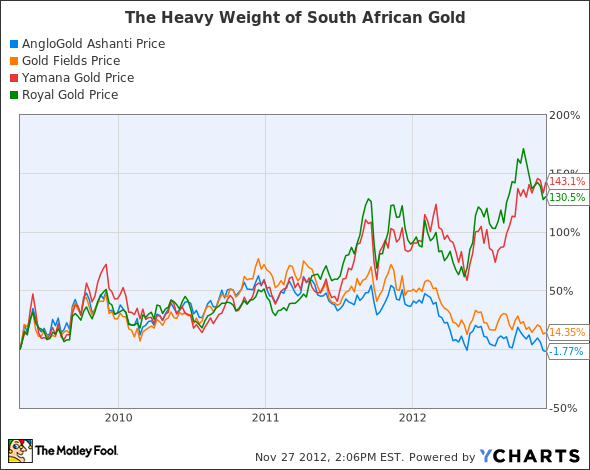 Although Paulson slashed his holding in Gold Fields by 63% during the third quarter, AngloGold Ashanti remains his fund's second-largest equity holding behind a monster position in the SPDR Gold Trust (GLD 0.55%). For my part, I remain skittish toward miners with substantial exposure to operations in South Africa, though I would welcome with vigor any restructuring that results in these stocks being freed from this heavy weight around their necks. I have considerable admiration for Gold Fields CEO Nick Holland and AngloGold CEO Mark Cutifani, and a deep appreciation for the quality of their respective asset portfolios outside of this most problematic jurisdiction.