When investors look at economic data for signs of a recovery, we're often looking for positive signs like GDP growth, housing starts, employment rates, etc. But sometimes it's important to look at who's struggling for signs of an economic improvement.

When we went into the Great Recession, investors were looking for places to stuff money that would be safe as the economy deteriorated. Conventional wisdom was that people would trade down in everything from retail to dining. It turns out that investors were right and everyone from McDonald's (NYSE:MCD) to Wal-Mart (NYSE:WMT) to dollar stores benefited from consumers looking to save a buck. But as the economy slowly recovers, we're starting to see signs that these companies are no longer as appealing to consumers.

So, isn't the opposite thesis now true? If companies that benefit from the downturn are struggling, isn't that another sign that the economy and consumers are getting stronger? I think so, and the signs are all there for us to see.

Wal-Mart is struggling
When the economy began to struggle in 2008 and 2009, one of the big winners was Wal-Mart. Consumers were looking for deals, and what better place to save a little money than Wal-Mart? The stock rose when the market crashed, and investors who sought safety in Wal-Mart were rewarded. By contrast, Target (NYSE:TGT), which stocks slightly more expensive items and attracts a slightly higher-end customer, fell in sync with the market and has only slightly outperformed over the past five years. 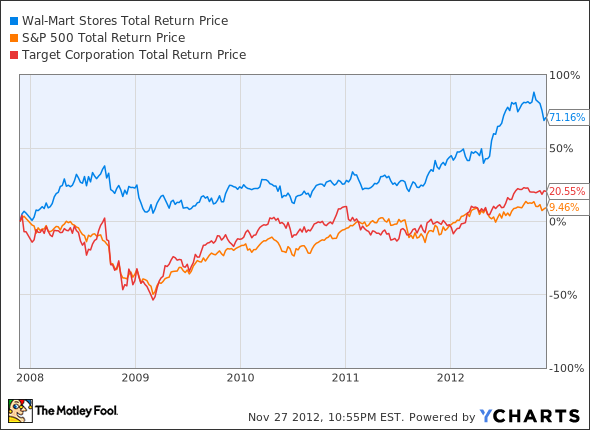 But if Wal-Mart is at its strongest when customers are trading down, what happens when the economy improves in a measurable way? You would think Wal-Mart would struggle, right?

We're starting to see signs that that's the case. Wal-Mart's recent quarterly results showed just a 1.5% gain in same-store sales in the U.S. compared to 2.9% at Target. This is a big divergence for the two retailers and shows that consumers are trading up.

McDonald's sales are down
Fast-food chain McDonald's recently said that October same-store sales were down 1.8%, the first such drop since 2003, also the beginning of an economic recovery. The company blamed a weak economy and consumers who were cutting back.

The problem is, that narrative doesn't jive with results seen at competitors Chipotle (NYSE:CMG) and Panera Bread (NASDAQ:PNRA). Chipotle experienced a 4.8% increase in comparable sales from a year ago, and Panera's third-quarter comparable bakery sales were up 6.2%.

It seems to be more than a coincidence that more expensive rivals are still growing when McDonald's is slowing. It looks like a sign that we're repeating an indicator of an economic recovery just like we saw the last time McDonald's sales dropped.

Who's next?
One of the biggest beneficiaries of the recession was dollar stores. The "discount" stores are actually far more expensive than most grocery stores or other discount stores on a per-unit basis, but the lower price tag has brought in new buyers during the recession. Their increased sales have been a boon for investors as well. 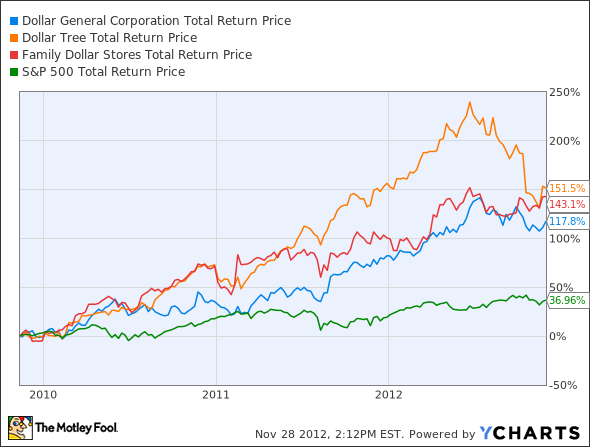 But we're getting early signs that the growth story is beginning to fall apart. Below is a table of same-store sales at Dollar Tree (NASDAQ:DLTR), Family Dollar (NYSE:FDO.DL), and Dollar General (NYSE:DG). Dollar Tree is the only one to report calendar third-quarter results so far, but its growth dropped precipitously. On Dec. 11 we'll see if the same can be said for Dollar General.

If Dollar General sees similar same-store results, we may be seeing the start of a trend away from dollar stores, which I think is a great sign for the economy.

Some strangely bullish signs
You may not believe that the struggles of Wal-Mart, McDonald's, and dollar stores are really bullish signs for the economy, but I think it's more than coincidence that these companies did well during the recession and seem to be struggling as the economy strengthens. As consumer confidence continues to increase and employment improves, I think these companies will continue to lag higher-end competition and will also underperform the indexes they outperformed during the recession.