According to the efficient markets hypothesis, it's impossible to beat the market because stock prices always reflect all relevant information. Of course, Foolish investors know that just isn't true. There are a number of biases on Wall Street that we can take advantage of to beat the market. Some are just plain human psychology, others the result of misguided groupthink. Whatever the cause may be, there are a few inefficient tendencies that pervade the financial industry. Let's take a look at some of the most common biases in the stock market.

Short term vs. long term
CEOs are often criticized for managing for the short term instead of the long term, but often they claim they're doing so in response to Wall Street's demands as analysts and institutional investors are often overly focused on the short term. For example, 70% of stock in this country is owned for 12 months or less, which can encourage companies to target short-term opportunities at the expense of long-term stability and growth. The market tends to overweight immediate news as we've seen in the recent past with the debt ceiling standoff, the financial crisis, and now the fiscal cliff as every day the market tries to read the tea leaves in the mumblings on Washington.

The financial crisis offers one example of this sort of overcorrection. Take a look at the chart below: 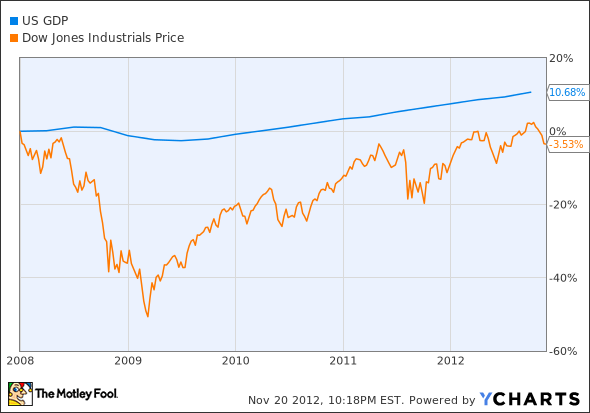 Notice that although the Dow Jones Industrial Average (DJINDICES:^DJI) lost as much as half its value, the GDP was relatively flat. Earnings may have taken a momentary dive, but the economy was far from dead. Even at its lowest point during the recession in the second quarter of 2009, U.S. GDP was $13.89 trillion, greater than it was in Q1 2007 when the Dow was pushing 13,000. Growth stocks such as lululemon athletica (NASDAQ:LULU) and Whole Foods (NASDAQ:WFM) have done particularly well since then. The market made the mistake of writing off otherwise strong companies with ambitious growth plans and economic moats.

The turnaround myth
If recent earnings reports taught us anything, it's that a corporate turnaround is easier said than done. We've seen a slew of disappointing quarters from staid retailers like Sears and Best Buy, and PC-makers such as Dell and Hewlett-Packard. All of these companies have touted one turnaround strategy or another, but the fact is, they're failing because their products are obsolete, and they've been mismanaged. Perhaps, the best example is J.C. Penney (OTC:JCPN.Q) where CEO Ron Johnson seems to have shown that he's no King Midas despite his pedigree as Apple's (NASDAQ:AAPL) retail guru. Penney's and Apple are very different animals. For starters, one company created a series of products that have redefined technology over the last decade, the other is simply a dull mall anchor.

The problem with these companies is that Wall Street always seems to go for the bait, whether it's a new CEO or whatever the rebranding strategy du jour is. All five stocks have fallen sharply over the last year with the exception of Sears, whose stock has gained because it's sold off assets. As a business, its fundamentals are still miserable. Each stock's fall over the past year mirrors the steady downward revisions of analyst estimates, showing their inability to predict such collapses.

The myth of diminishing growth
The discounted cash flow model is the most commonly used technique for valuing stocks. In general, the model assumes that revenue growth will slow over a span of several years, eventually settling in a steady state. However, the reality is, that's far from the case. In business, earnings growth can be incredibly erratic, depending on new products, business cycles, and consumer tastes, among other things.

Perhaps Apple offers the best example of this. While conventional wisdom states that growth should slow as a company grows, Apple was doubling its revenue every quarter until recently in spite of its enormity. 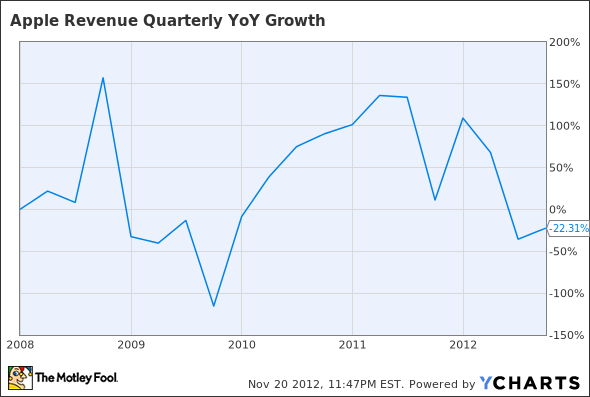 As you can see, revenue growth has not followed any predictable pattern. While it may be true that the torrid expansion sometimes seen in small companies will eventually slow down, it usually isn't a smooth decline. Growth rates have just as much to do with the business cycles, new products, and new market penetration as with the mathematical rule that a company can only get so big.

Foolish takeaway
These aren't the only biases in the market, of course. The asset bubble is another common one, as we've seen with Internet stocks and real estate more recently. Herd mentality is common on Wall Street, and whatever individual investors can do to avoid that should give them a better chance of beating the market. We've seen time and again, "momentum" stocks get out of control, leading to sharp drops, but really, "momentum" just seems to be a euphemism for unjustifiable gains.

Nonsense is in no short supply among the talking heads on Wall Street. Take advantage of the market myths, protect your gains, and find new winners.