Another day, another senseless discount on Intel (NASDAQ:INTC).

The preeminent microchip maker's shares are down 2% today even as the Dow Jones Industrial Average (DJINDICES:^DJI) gained 0.2%. Intel has been a pretty good proxy for the Dow in recent years, except that the stock plunged headlong since August while its Dow peers traded sideways. At this point, Intel offers a very substantial discount to the index it often emulates.

I mean, a downright nutty rebate: 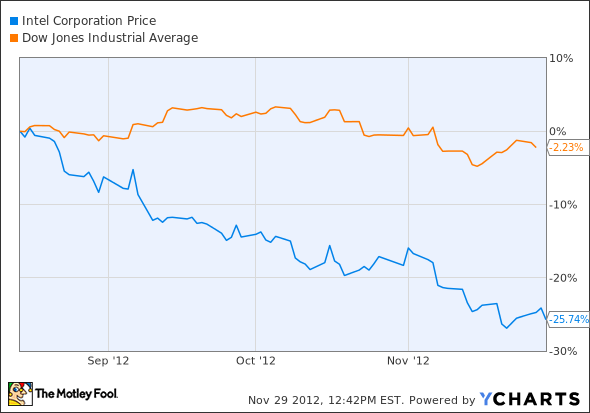 Crazy cheap or crazy dangerous?
Some might say that this is the beginning of the end for Intel. The market for PC systems is melting away quicker than a snowball in Miami, Intel has failed to stake a serious claim on the mobile computing market that's replacing PCs, and just to rub salt in the wounds, Apple (NASDAQ:AAPL) is even thinking about powering its iMacs and laptops with its own ARM (NASDAQ:ARMH) chips sometime soon.

All of this seems to add up to a doomsday scenario for Intel, totally justifying the recent price drops. But there's more to the story.

Take today's price action as an example. Intel isn't falling on a generally positive market day because someone uncovered new threats to the chip titan. The PC sector isn't any deader today than it was yesterday. Instead, investors key their Intel sales on these two events:

In a rational market, neither of these perceived downside catalysts would have any power to move Intel's stock. AMD is struggling to stay alive, let alone pose any threat to its much larger rival. Investing in Sharp might be a gamble, but a pretty small one considering Intel's $10.5 billion in cash equivalents and $8 billion of annual cash flows: 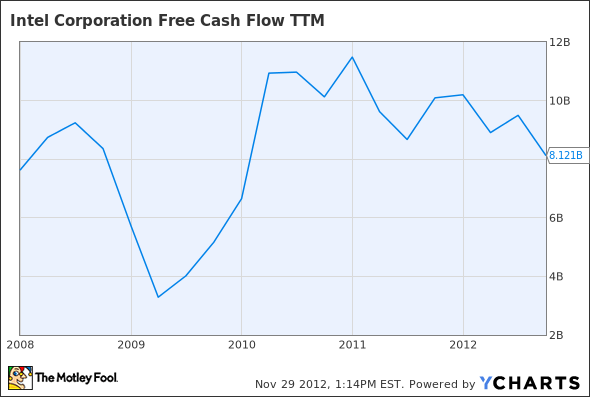 But the market is often certifiably insane, and Intel just got even cheaper. You know that old adage about buying when there's blood in the streets? This is it, right here.

Risks and rewards
The risks facing Intel are substantial, but the company has been to this rodeo before. With or without direct involvement in tablets and smartphones, those mobile gadgets will always need to be fed data from large server systems -- which happens to be Intel's bread and butter. The rumors of Intel's death are hugely exaggerated.

The stock is ridiculously undervalued when you consider Intel's fortress-like market presence. On top of that, Intel has a tendency to buy back a ton of shares when the stock gets crazy cheap. There's a $6.3 billion buyback authorization on the table today, and the board of directors would be happy to expand it as necessary. That's the kind of opportunistic buyback that creates shareholder value rather than destroying it, and a serious rocket booster for long-term share prices.

And we haven't even talked about Intel's generous dividends. The stock yields a fantastic 4.6% today thanks to the recent sell-off. Doesn't this chart make the value investor in you drool? 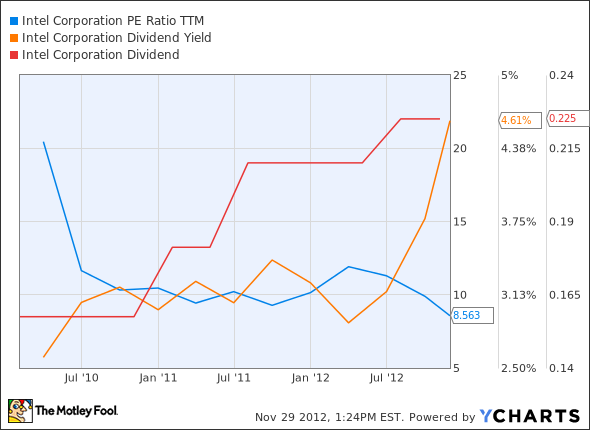