For Apple's (NASDAQ:AAPL) mythical TV set, the challenge with bringing the device to market has never been about technology or vision. It's always been the go-to-market strategy that has hindered innovation in the television industry. That also includes navigating the politics of the status quo, as cable operators and content creators are mostly entrenched in their ways.

Fortunately, one content exec is looking forward to Apple's reinvention of the TV: Time Warner (NYSE:TWX) CEO Jeff Bewkes. At Business Insider's Ignition conference, Bewkes said he hopes Apple makes a TV because it's "a great device company." Apple has a history of being able to put together differentiated offerings in numerous industries that are widely considered commoditized for other companies, and Bewkes thinks Apple can do it again in TV.

There are fundamental problems in the TV biz that Apple may be able to help mitigate. For example, the CEO acknowledged Apple's "good interface and navigation skills," referring to the Mac maker's reputation for ease of use and user experience. Consumers are currently overwhelmed by the sheer number of channels available and have to navigate cumbersome interfaces to find the shows that they want to watch.

Naturally, Apple won't be the only one trying to solve these problems, with Bewkes predicting plenty of competition and "as many interfaces as you can get," which is a clear reference to what Google (NASDAQ:GOOGL) and Microsoft (NASDAQ:MSFT) are also up to.

Not I, said the CBS exec
It's good to know some content creators are onboard, especially since others are decidedly not. Last year, CBS (NASDAQ:VIAC) CEO Les Moonves said he didn't want to offer his company's content on Apple's TV platform because the terms weren't right. His concern was that joining up with Apple could threaten to disrupt CBS' existing business. More recently, Moonves said on the August conference call that he's open to Apple TV but it still comes down to the details.

It's likely that Apple is interested in pursuing an "a la carte" strategy, similar to how it sells content in iTunes, but with specific channels to subscribe to. The current Apple TV set-top box is already toying around with a new "channel-as-app" model that seems promising. The traditional model of selling bundled channels (including the ones that no one watch) is ripe for disruption, but some content creators are resistant to rocking the boat.

Big G tries it both ways
Google is also making big pushes into the living room, but the search giant is still willing to play by the old rules with its Google Fiber service that's now available in Kansas City, Kan., and Kansas City, Mo. The service's plans have more traditional pricing not unlike what you'd expect from other cable operators, such as a TV and Internet package for $120 per month that includes a full channel lineup (including said channels you don't want). 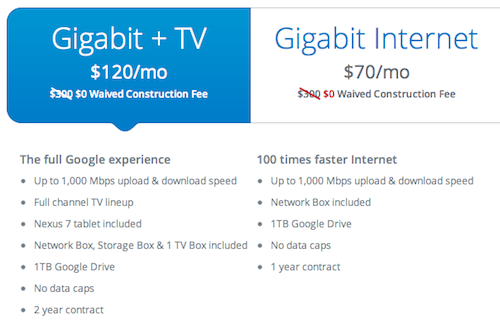 The package is attractive for other reasons, such as the included Nexus 7, blistering gigabit data speeds, or 1 terabyte of Google Drive storage, but the TV content pricing is really more of the same. Meanwhile, Google is also exploring the "channel-as-app" idea in its Google TV platform, which is separate from its Google Fiber service.

What's Mr. Softy up to?
Microsoft is also up to something, or rather a bunch of things, many of which tap into the Xbox 360's established presence in many living rooms. The software giant has partnered with Verizon (NYSE: VZ) to offer its FiOS TV services on the Xbox to existing subscribers. There are also other video content apps on the platform, and Microsoft even tapped a former CBS exec Nancy Tellem to produce original video content.

Mr. Softy might also have an Xbox TV set-top box in the works to hit lower price points and focus on casual gaming.

All together now
TV manufacturers have long been in shambles, but that's what happens when you compete solely on price. If Apple can line up all the pieces of its TV puzzle, including the necessary content components for a different distribution model, it could justify the price premium and gross margins investors know it will seek.

Time Warner Cable (NYSE: TWC), the cable operating business that was spun off in 2009, has already implied interest with working with Apple. COO Rob Marcus recently conceded that its cloud-based push would likely entail "giving up control of the interface," in a clear reference to Apple.

It's all coming together.