At the beginning of 2012, I set out to form The World's Greatest Growth Portfolio. Though I can't promise it will always live up to its moniker, the portfolio has returned 22% in just 10 months, besting the S&P 500 by about 9 percentage points.

Today, I'm going to take a deep dive into one of my current holdings: Solazyme (NASDAQ:TVIA). Read all the way to the end, and I'll offer access to a special free report on the only stock in Solazyme's industry you really need to own.

You make oil out of what?!

If there's one thing I'm sure of, it's that Solazyme is innovative. The company has developed a way of taking feedstock -- think switchgrass, corn, animal fats, and even wood chips -- and allowing patented microalgae to digest the feedstock and turn out tailored oils.

And while the company does make the kind of oil that most people think of when they hear the word, there's more that Solazyme makes than just fuel. The company can also produce oils that can be used in health and beauty products, as well as oils for the industrial chemical industry.

As a relatively tiny company with only about $25 million in cash on hand, Solazyme has relied heavily on partnerships with other organizations to further develop its products. The company's oil was used by the Navy earlier in the year, and also fueled a United Continental flight a year ago as well. The company also has a partnership in place with Chevron (NYSE:CVX) to jointly research alternative energy possibilities.

But while the possibilities of alternative fuels are appealing, Solazyme's other arms -- those producing tailored oils for health, beauty, and industrial companies -- are also getting a lot of attention. Solazyme has joint ventures in place with companies like Roquette, Unilever, Dow Chemical, Bunge,  and -- as of just two weeks ago -- ADM (NYSE:ADM).

Is it good enough?
Based on what I've said above, it might seem tough to imagine I wouldn't keep the company in my portfolio. But I haven't told the whole story yet.

Along with intense competition from rivals like Amyris, Gevo, and KiOR, there are several trends that make it hard for me to have enough faith in the company's ability to be around 10 years from now.

Over the first three quarters of 2012, revenue is up by 48%. That revenue can be further broken down into two categories. The first is money that has been given to the company to conduct research. Though this is nice, it's hardly a long-term plan for financial success. The second category is money that Solazyme has collected from the actual products it makes. 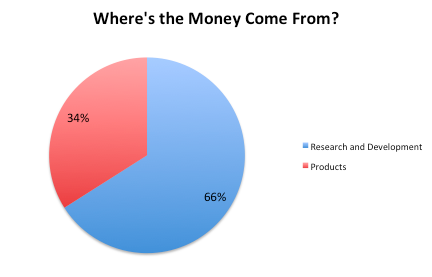 Though the chart above is certainly enough to make a long-term investor worried, it should be noted that while revenue from research grants grew by 29% over the course of the year, the money that came from the sale of Solazyme products grew a whopping 115%!

At the same time, however, costs continue to hold the company down. Over the past year, they rose 63%, far outpacing revenue growth. Most pressing is that research and development costs -- which make up over half of all expenses -- grew by 53%.

There's certainly nothing wrong with investing for the future, and for a company like Solazyme, it's totally necessary. But just because a company is making prudent moves right now doesn't mean it'll play out well in the future.

There are a lot of variables, including competition, changing technology, simple availability of feedstock, and even ethical questions surrounding genetic engineering that make it difficult for me to see keeping Solazyme in my portfolio in 2013.

As it stands in real life, Solazyme only compromises a very small part of my portfolio. If you'd like to read about a different energy company that currently accounts for 8% of my real-life portfolio, I suggest you check out our special free report: "The Only Energy Stock You'll Ever Need."