Rising 1.1%, Intel (NASDAQ:INTC) is the biggest winner on the Dow Jones (DJINDICES:^DJI) index today. The biggest loser? The other half of the legendary WinTel duo -- Microsoft (NASDAQ:MSFT) -- is down 1.3%. 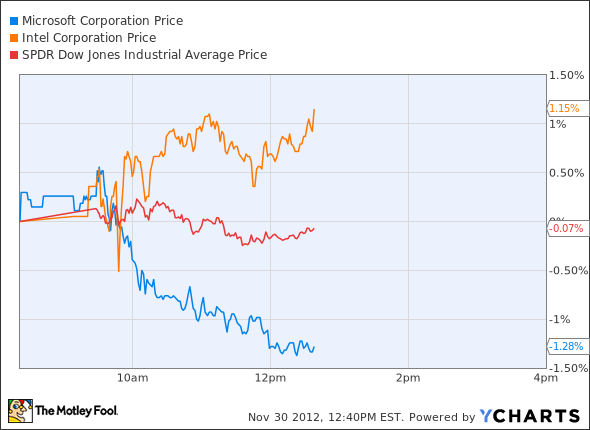 These companies are joined by the hip in many ways. How can one of them soar just as fast as the other one is sinking?

The answer, my friend, is actually obvious. Intel and Microsoft are adjusting to the new realities of the computing market -- in very different ways and with polar-opposite outcomes ahead.

Microsoft's big bet is the Windows 8 platformed. Streamlined across smartphone, tablet, and PC systems and running on the traditional Intel chips as well as newfangled ARM (NASDAQ:ARMH) hardware, the operating system is Mr. Softy's attempt to stay relevant no matter where the computing sector goes next.

But a brand-new report from the NPD group shows that Windows 8 is off to a terrible start no matter how you slice it.

The software was supposed to be the saving grace for the ailing PC market. Consumers have seen it coming for ages, and might have held off on buying new computers because there was this new thing just around the corner. But it hasn't worked out that way. Instead, PC sales fell 24% compared to the same early holiday period in 2011.

And consumers don't seem excited about the new software, which changes the way you interact with your computer and makes desktops act more like overgrown smartphones. When Windows 7 was four weeks old, it was bundled with 83% of all new PC sales. For Windows 8, that acceptance ratio plunged to 58%.

This bet-the-company effort is starting to look like an encore of the Windows Vista fiasco.

This would let Apple move further away from current chip supplier and courtroom adversary Samsung, while Intel diversifies its revenue stream and gains instant street cred in the mobile world.

And that's how Microsoft fumbled today even as Intel bounced back from a recent losing streak. The wonder twins don't look so identical anymore.