Please ensure Javascript is enabled for purposes of website accessibility
Log In Help Join The Motley Fool
Free Article Join Over 1 Million Premium Members And Get More In-Depth Stock Guidance and Research
By Alex Dumortier, CFA - Dec 3, 2012 at 10:15AM

It's the first trading day of December, and there is quite a bit of economic data out today and this week (including the U.S. nonfarm payrolls on Friday). At first glance, the headlines don't look encouraging. Here are two examples via Reuters:

Incidentally, the trend in the French auto market is just the opposite of that in the U.S., where the rate of sales last month was the highest it's been on an annualized basis since early 2008. However, disappointing data out of the Europe appears to be moot, as far as U.S. stocks are concerned; one gets the feeling that investors have given up on the region. Here's the headline that really matters:

That's the story the financial media is pointing at to explain this morning's buoyant stock market. The Dow Jones Industrial Average (^DJI -1.37%) and the broader S&P 500 (^GSPC -1.56%) are up 0.01% and 0.3%, respectively, as of 10:05 a.m. EST. Still, it's worth recalling that the Eurozone alone is roughly 80% larger than China in terms of GDP and that there are problems with China's recovery, which is led by large -- i.e., state-owned or state-sponsored -- firms.

The micro view
Shares of PC manufacturer Dell (DELL.DL) are getting a lift this morning from Goldman Sachs, which upgraded the stock and raised its 12-month price target from $9 to $13. In its note, Goldman cites three factors:

Dell has been a widow-maker of a stock. Year-to-date performance has been awful: 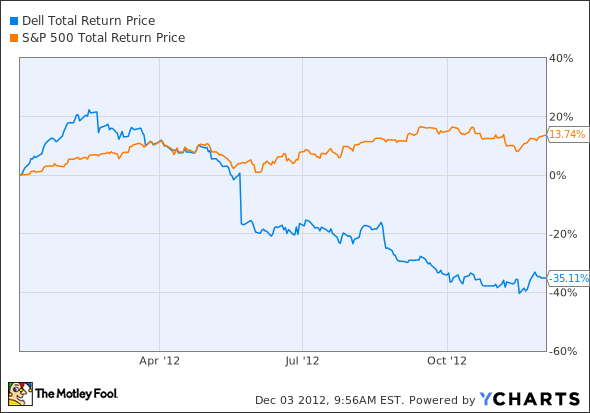 Longer-term (five- and 10-year) performance charts look even worse. Is it finally time to jump in feet-first on Goldman's advice? Not if you are an investor; the outlook for a company like Dell is simply too opaque. That has little to do with Dell, per se, and more to do with the structure and dynamics of its industry, which is enormously competitive and subject to permanent change. If you're interested in disruptive companies, click here to receive our free report: "3 Stocks to Own For The New Industrial Revolution."