The three U.S. economic-data releases this morning were mixed for stocks.

This morning, ADP announced that the U.S. added 118,000 jobs in November. That is less than October's 157,000 jobs but in line with analyst estimates. The company estimated that Not-Quite-A-Hurricane Sandy cost the U.S. 86,000 jobs. ADP always comes out with its report a few days before the official jobs report on Friday. ADP's numbers only include the private sector, while the government's figure includes both the private and public sector. 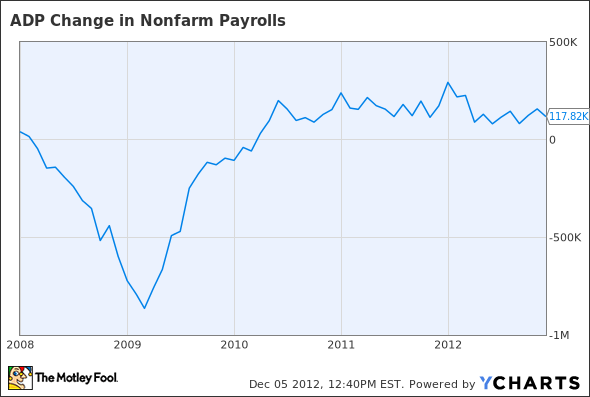 The second report today from the Department of Labor said that productivity rose 2.9%, a revision upward from the previously reported 1.9%. Analysts had expected a revision to 2.8%.

Third for the day was the Institute for Supply Management's Non-Manufacturing index. The ISM reported the index rose 0.5 percentage points to 54.7% in November, up from 54.2% in October. The index tracks the services sector, and the rising number indicates a slightly faster growth rate in November. Analysts had expected a decline in the index to 53%.

The Dow started the day down but reversed course around 11 a.m. EST. Perhaps some traders know something about Congress' negotiations over the fiscal cliff. With the mixed bag of economic reports and no news about the fiscal-cliff negotiations, it's a bit of a surprise that the market is up almost a percent. These three stocks are leading the Dow's rally today.

Second for the day is Travelers (NYSE:TRV) up 4.5% to $73.73. Investors had been concerned over Travelers' exposure to Superstorm Sandy. Given the uncertainty over the extent of the damages, the company had temporarily suspended stock buybacks. Travelers' announced today that it estimates its losses will be $1.14 billion, but that drops to just $650 million after taxes and reinsurance kick in. As such, the company announced it would reinstate its share buyback program. There's a lot to like about Travelers -- especially its 2.6% dividend. Fool contributor Anders Bylund calls buybacks the invisible dividend and shows you how Travelers is a great example of the power of buybacks. Click here for his take.

Third for the day is Hewlett-Packard (NYSE:HPQ) up 4.3% to $14.12. HP has had a terrible year. It's down 45% year to date thanks to two $8 billion-plus writedowns, a declining market for PCs, and accusations of fraud against the former CEO of one of its acquisitions. With such a beaten-down stock, value investors are getting interested. The stock has rallied 11% in the past week as some investors begin to see HP as a steal.