Now that 2012's nearly in the rearview mirror, investors are beginning to sift through the market for the best stocks of the upcoming year. The future is plagued with uncertainty, but that has always been the case, and it has never stopped us from seeking out long-term values. One way to find those values is to look for companies with a long history of success. The Dow Jones Industrial Average (DJINDICES:^DJI) contains many such companies, but some are better investments than others.

Today we'll be taking a look at Wal-Mart (NYSE:WMT), a Dow component since 1997, to see if its past-year performance holds some clues for 2013.

First-half recap
Wal-Mart has trounced the Dow in 2012, as you can see here: 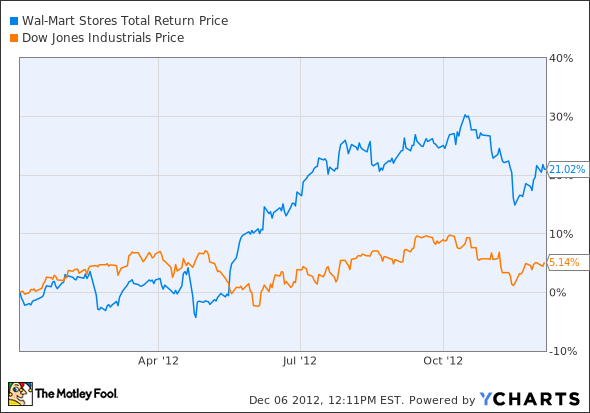 What the numbers don't tell you
The one thing that stands out here is how much Wal-Mart's free cash flow has grown, on a trailing-12-month basis, over the past four quarters. It's far in advance of the company's flat bottom line, and it almost perfectly tracks the gain in the company's stock. Wal-Mart makes up about 4.2% of the Dow by weighting, so its strength hasn't pulled the Dow that much higher.

So what's behind Wal-Mart's growth this year?

This year, Wal-Mart's been doing its level best to fight back against Amazon.com (NASDAQ:AMZN). Once Amazon started trying out same-day delivery, Wal-Mart followed right along. The retail giant has even begun testing a monthly subscription service for repeat food shipments. The only downside is that online shipments may be in decline. FedEx (NYSE:FDX) is cutting back Express air services. Given FedEx's heft, that's likely indicative of less interest in get-it-now options. Of course, FedEx may not have been forced to cut back if Wal-Mart had used its services; the retailer went instead with UPS (NYSE:UPS) for its same-day trials. There are multiple ways to read these data points.

Wal-Mart isn't stopping there. Should you still want to shop in a retail location, Wal-Mart's updated mobile app offers in-store mapping and item-locating functionality, which is such a brilliant idea for big-box stores that I'm amazed it took Wal-Mart so long to come up with it. It would also be effective in the fight against "showrooming," since someone on a mission to find a specific item in a specific store ought to be less likely to look up competing prices online.

When it comes down to it, retail differentiation matters, especially in competition against other big-box outlets. Both Costco (NASDAQ:COST) and Target (NYSE:TGT) are expected to grow faster than Wal-Mart in 2013, and Target is especially priced at a compelling level relative to its larger competitor. These three giants seem to be pushing some specialty retail segments -- particularly big-box office-supply and electronics stores -- into the dustbin of obsolescence. For Wal-Mart to stay on top, it will have to prove compelling both online and off.

A growing global presence is another advantage. Wal-Mart already has nearly 400 stores in China and plans to open 100 more over the next three years. About 30% of Wal-Mart's sales this year have come from international locations, compared with about 28% last year It's a notable improvement, but there's still plenty of room for growth.

Foolish final thoughts
Wal-Mart's improvements on the digital front are a good start, and it has clearly become one of the best in the retail class at defending against online incursions. However, rising employee unrest threatens to undermine some of the company's forward momentum. Wal-Mart's image has never been that of a caring corporate citizen, but its value to shoppers has historically outweighed any negative sentiment. Wal-Mart should continue to enhance its online offerings while expanding internationally. These two initiatives ought to be the two major growth-drivers for Wal-Mart in 2013.