Some bargains are best measured over the course of a generation

Even those of us who pledge to defend their beloved holiday celebrations from the encroaching popularity of crazed shopping sprees can agree: price matters! While you won't find me waiting in line out in the cold to get stampeded by fierce bargain hunters, this frugal Fool can concede to a touch of price-envy over some of the deals that can be found on Black Friday (or Black Thursday).

Meanwhile, for those long-term oriented Fools who recognize that some of the greatest bargains in life are measured over the course of a generation rather than at the point of purchase, I think I have pinpointed a compelling investment opportunity in the shares of aluminum icon Alcoa (AA). Thus far, smaller rival Kaiser Aluminum (KALU -2.83%) has been about the only aluminum stock worth holding since the onset of the global financial crisis. But when I take a few steps back to consider the march of time, I see a long and profitable journey stretched out before Alcoa as the company works to reclaim shareholder value lost to the generational collapse outlined below.

To convey that long-term outlook, and present the findings of my supporting research, I have prepared -- along with fellow Motley Fool analyst Taylor Muckerman -- an in-depth research report that I strongly encourage readers to access by clicking here. For a peak at what's inside, I present below one section of the report for your consideration, while emphasizing that the full report comes complete with periodic updates for one full year! Please enjoy the following excerpt, and share your own thoughts on Alcoa's long-term outlook in the comments section below.

The Opportunity
Sometimes even long-term-oriented investors need to take a step back and broaden the time horizon of their analytical scope, and the investment opportunity presented by shares of this 124-year-old industrial icon beckons just such a commanding view. While the road ahead for Alcoa offers multiple glimpses of a compelling investment thesis in the making, a brief look at the crumbled road behind lets investors know precisely where they're starting from.

In a nutshell, the starting point for new investors looking to build a position in Alcoa is from right within the rubble of one of the more spectacular equity collapses of the global financial crisis. Within two years after posting the company's best-ever earnings from continuing operations during 2007, Alcoa's revenues shrank by 40%, and that $2.6 billion profit swung violently to a loss of $924 million for 2009! But as the stock imploded to levels unseen since the early 1990's, the seeds of a long-term investment opportunity were sown. The following 20-year historical chart sets the stage in dramatic fashion as our discussion now turns to the all-important future of Alcoa. 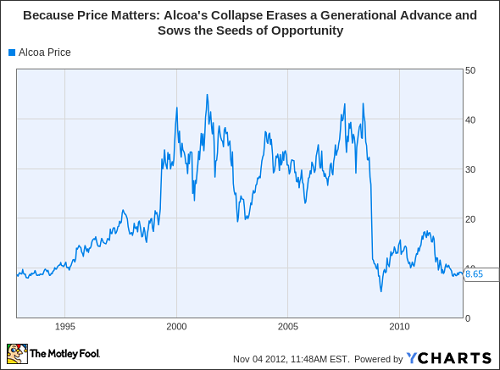 The innovative road forward for Alcoa
Any close inspection of Alcoa's customer base will uncover innovation in design and engineering as core drivers of potential growth in demand for Alcoa's products. Providing a certain x-factor of upside that is admittedly difficult to quantify, Alcoa possesses strong prospects for opening up new end-market opportunities even in the face of sustained global economic challenges. Aerospace applications alone recently accounted for 16% of consolidated revenue for Alcoa, and the company rightfully boasts that "today's major new aircraft programs incorporate Alcoa's product innovations from nose to tail and wingtip to wingtip." Alcoa itself pioneered many of the specialized alloys and casting processes that continue to dominate the aviation industry, including the aluminum-lithium plate that's carried aloft by every Boeing (BA -2.06%) 787 Dreamliner.

In the automotive industry – another solid source of relative strength among end-markets – multiple manufacturers are increasingly turning their focus to aluminum to build lighter, more fuel-efficient vehicles. According to Tesla Motors (TSLA 1.83%) Vice President George Blankenship, that manufacturer's Model S vehicle "actually starts as a huge aluminum coil that weighs up to 20,000 pounds"! Discussing design options for the F-150 pick-up truck in relation to looming U.S. requirements for improved fuel economy, Raj Nair, global chief of product development for Ford Motor Company (F -2.03%), stated during 2012 that "Weight reduction is going to be a big part of our strategy," and that "Aluminum is certainly a big opportunity for weight reduction." Meanwhile, Alcoa is building aluminum-framed passenger buses with a Chinese joint-venture partner that are 46% lighter – and with 6% better fuel economy – than their more steel-heavy counterparts.

Alcoa produces aluminum drill pipe used in both onshore and offshore energy applications, and the company's products have already extended the effective range of some drill rigs operating in the Marcellus Shale by 1,000 feet. And as some of that natural gas moves on to fuel giant gas turbines for power generation, Alcoa-cast blades and vanes will often be found therein.

From the exploding market for tablet PCs, to "smog-eating" building panels that actually clean the air around them, new and expanding applications for Alcoa's products continue to emerge across a sweeping array of end markets. And just as it has throughout the company's history, Alcoa continues to play a commanding role in product and process development that, in my view, guarantees the company's position as a primary beneficiary of innovation-fueled aluminum demand growth.

Alcoa's improving competitive stance
Because power tops the list of cost inputs for the energy-intensive aluminum industry, access to plentiful and inexpensive electricity is critical in determining the competitiveness of a given operation. Particularly within a global aluminum industry that suffers from a glut of production capacity – even in the wake of some meaningful curtailments – defending one's operating margins by securing a cost-competitive energy supply may present the surest means of restoring profitability in a low-price environment for the metal. Although at least two major manufacturers anticipate a long-term CAGR of roughly 6% to 7% for global aluminum demand over the coming decade, both persistent macroeconomic headwinds and plentiful supply point to the possibility of only limited upside for aluminum prices over the medium term.

Fortunately for Alcoa, the major natural gas boom occurring in the United States has substantially improved the outlook for long-term utility costs, and may ultimately help the company defend its U.S. sales (which presently account for nearly one-half of consolidated sales) against low-cost imports from China and elsewhere. Alcoa also operates three major facilities in Québec, where electricity rates are already among the lowest in the world. Considering the impressive productivity gains achieved throughout its operations, the outlook for competitively priced U.S. power supply, and U.S. trade tariffs enacted to counteract alleged subsidies for Chinese aluminum production, I believe Alcoa is favorably positioned to effectively defend its relative margin performance vis-à-vis the company's primary global rivals.