We are just weeks away from the debut of a brand new company on the market. Actually, the brand will be new, but the company itself will bring lots of history with it. Abbott (NYSE:ABT) spins off AbbVie (NYSE:ABBV) at the beginning of 2013. I recently profiled what the new Abbott would look like. Now let's look at AbbVie in its life after Abbott.

Inside AbbVie
AbbVie will inherit all of Abbott's brand pharmaceutical and biologic products, while the new Abbott will keep branded generics, diagnostics, medical devices, and nutrition lines of business. What will AbbVie's product mix look like out of the gate in terms of sales? 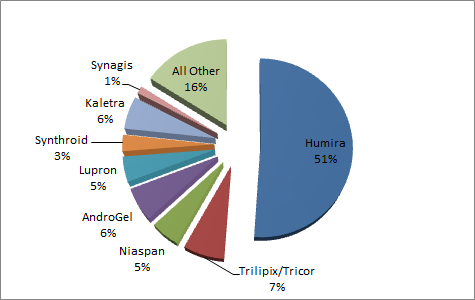 Based on sales numbers for the first nine months of 2012, AbbVie's product lineup could be called "Humira and the Seven Dwarfs." Humira and AndroGel are the only major drugs with solid growth during the period, increasing sales by 26% and 28%, respectively, compared to 2011. Sales for Lupron increased a paltry 3%. All of the other major products saw sales decrease in the first three quarters versus the same period last year.

AbbVie's total revenue should be in the vicinity of $18 billion, judging by 2011 results. The spin-off will start out with around $7.2 billion in cash and $15.7 billion of debt.

Biosimilars?
Which peers will be similar to the newly formed biotech? If we look at size of revenue, Amgen (NASDAQ:AMGN), Baxter (NYSE:BAX), Bristol-Myers Squibb (NYSE:BMY), and Eli Lilly (NYSE:LLY) are all in the same ballpark as AbbVie will be.

The nearest rival with respect to revenue is Bristol, which had nearly $19 billion in sales over the past 12 months. Amgen comes close also, with trailing-12-month sales of $16.5 billion. Baxter and Lilly are the relative outliers with revenue of $14 billion and $22.7 billion, respectively.

When we look at the products of these companies, though, Amgen seems to be the most similar to AbbVie. Amgen's Enbrel competes head to head with Humira in the treatment of arthritis and psoriasis. In the U.S. market, Humira garners a 29% share of the market while Enbrel gets 28%.

Amgen's valuation also stacks up closely to that of the current Abbott in a couple of key metrics. The trailing P/E multiples for both companies fall just short of 16 and are separated by only a sliver. Both have forward P/E multiples near 12.5.

Can investors look at Amgen's stock surge of more than 50% over the last year as a potential target for AbbVie after the spin-off? Let's not get ahead of ourselves. There are plenty of similarities between the two companies, but there are some big differences as well.

Perhaps most importantly, Amgen doesn't rely as heavily on one drug as AbbVie will. Sales for Amgen's top drug, Neulasta/Neupogen, made up 33% of total sales for the first nine months of 2012. Enbrel, the company's next highest-selling product, accounted for 25%.

The AbbVie to be
Another thing that investors should be wary of is that the AbbVie of the future is likely to be very different from the one making its debut in January. While Humira sales continue to grow, the company loses key patent protection for the drug in 2016. AbbVie might start out looking similar in some ways to Amgen, but it could morph into an organization that has more in common with other biotech firms.

One of the drugs the company pins future hopes on is daclizumab, which is used to treat relapsing multiple sclerosis. A phase 3 clinical trial is currently under way for the drug in collaboration with Biogen (NASDAQ:BIIB). Results from this study are expected in 2014.

Another excellent opportunity for AbbVie lies in the hepatitis-C virus, or HCV, market. The company's interferon-free combination drug is currently part of a phase 3 study. If all goes well, the new product could hit the market in 2015.

If AbbVie succeeds with its HCV clinical study, the company appears likely to face competition from Gilead Sciences (NASDAQ:GILD). Gilead reported promising news recently from its phase 3 study of sofosbuvir plus ribavirin, an interferon-free combination targeting HCV. The company plans to conduct two other phase 3 studies for the combination and could submit regulatory filings by mid-2013.

AbbVie's projected revenue doubles that of Gilead, although Gilead could certainly experience strong growth. Bristol could ultimately be the closest peer to AbbVie in terms of size and products. Although Bristol recently canceled development for one HCV drug after patients developed heart failure, the company has another HCV regimen in its pipeline that could could emerge as a winner.

Such is life
The reality, of course, is that no two companies will be just alike. It's foolish (with a small "f") to expect the results of companies with similar size and similar product lines to always achieve similar success.

Execution, innovation and plain luck separate the great from the good and the not-so-good. Such is life. Or, as the French say, c'est la vie. We'll have to wait and see if AbbVie becomes great, good, or not-so-good. C'est l'AbbVie.