The London Whale has dominated JPMorgan press for some time, even though it is Jamie Dimon who has shined.

Under the category of "everybody loves a scandal," ever since JPMorgan Chase (JPM -0.80%) disclosed the losses created by the trades of Bruno Isksil -- the "London Whale" -- the scandal has been mentioned in connection to nearly every story about the venerable bank. As the year comes to a close, and against the backdrop of a Warren Buffet endorsement of CEO Jamie Dimon as the Treasury Secretary, considering both the impact of the trade and the way that the news was handled should provide some useful context for evaluating the stock going forward, as well as providing a point of reference for the next time things go awry.

Go with your gut
When the story first broke, Mr. Dimon received some bad press when he referred to the incident as a "tempest in a teapot ." The remarks temporarily tarnished his sparkling image, but the poor coverage quickly led the CEO to shift into damage control mode. At the time, the trade was thought to have the potential to cost the bank $2 billion in trading losses, but that number quickly swelled to finally settle at $6 billion . Mr. Dimon quickly changed his tune, citing "errors, sloppiness, and bad judgment " as the cause of the loss.

To place the loss into the appropriate context, at no time since the trade was disclosed did the bank post a net loss. In the bank's most recent earnings results, in fact, JPMorgan posted record earnings  of $5.7 billion, which represented a 34% increase on a year-over-year basis. While it is hard to fault Mr. Dimon for playing to the press and recanting his original position on the matter, the numbers speak for themselves. JPMorgan is in the business of making money by taking risks, and sometimes those risks result in losses. When those losses can be absorbed sufficiently that the bank remains profitable and the loss can be all but covered by a single quarter's revenue, it is hard to feel the criticism has been warranted.

To further put the situation in context, consider the chart below. Year to date, JPMorgan is up over 21% despite the losses from the Whale. While that significantly lags Bank of America (BAC 0.12%), which is up over 80%, Bank of America was one of the hardest-hit stocks during the financial crisis and had a long way to recover. Citigroup (C -0.06%) is up nearly 33% this year, but a large part of the stock's positive performance came last week on the news that it was cutting job and streamlining its bulky mass. Morgan Stanley brings up the rear, up just over 5% this year. 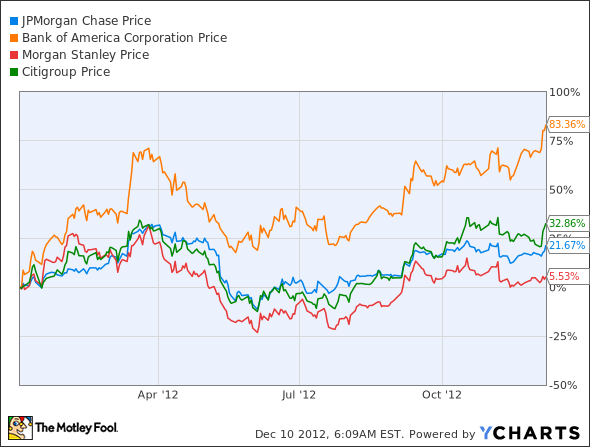 Poor timing
Of some interest, and if we are to properly place the entire incident into the right context, it should be noted that the Whale was not wrong as much as he was early. Experienced traders understand that these terms are essentially interchangeable, but one of the central trades that cost him his job has become very popular. A recent Bloomberg story explains:

Morgan Stanley (MS -0.49%) analysts included among their top 13 trades for 2013 a bet that the cost of credit derivatives protecting against losses on junk bonds will get more expensive relative to investment-grade debt as sluggish growth fuels more corporate defaults. After the difference between the measures plunged to a 14-month low in September, Bank of America credit trader Kavi Gupta wrote in an email to clients last month that the so-called decompression trade was his favorite strategy.

The trade was one of the central positions used by the Whale . As the Federal Reserve has kept pressure on interest rates, junk bond yields have fallen to record lows. The shifting market conditions have made the trade increasingly attractive. The ultimate success of the trade is not a total vindication of Mr. Isksil's actions, put it certainly lends some color.

The White Knight emerges
Despite the brief tarnish that the event placed on Mr. Dimon's reputation, he has not only resumed his place as one of the only trusted names in finance, he has won Warren Buffet's bid for Treasury Secretary. In a recent interview with Charlie Rose, Mr. Buffett made his case: "I think [Dimon] knows more about markets than probably anybody you could find in the world. And I think that if in the next four years we run into some kind of a chaos in markets some place -- and who knows when that can happen -- that he would think better about it, he would command the respect of foreign leaders that he might have to coordinate with."

While it is hard to imagine a selection that would not be a massive improvement over Tim Geithner, including the total elimination of the role to simply avoid any more of his absurdity, Mr. Dimon's skill at weathering the financial crisis that began in 2008 makes him a natural choice. Overall, while the Whale has gotten a considerable amount of ink, it is Mr. Dimon that should be the focus of this story. The takeaway is that even when the numbers seem impossibly large, skilled managers can navigate the storm and come out ahead. Scrutiny and vigilance are good, but too much blurs reality.