In light of the looming fiscal cliff, many companies are choosing to pay special dividends before year-end. But before you get too excited about the extra coin you'll receive, there are a few things you need to know about special dividends.

On edge
As it currently stands, taxes on dividends are set to increase next year unless Congress averts the fiscal cliff. After the New Year's champagne has fizzled out, qualified dividends will be taxed at an individual's marginal rate, up from the current 15% flat rate. Due to this, many companies have elected to pay dividends -- their regular ones or special ones -- by year-end to save shareholders a potential tax bite.

But the most recent wave of dividends has been funded with debt. To take advantage of super-low interest rates, some companies including Costco (COST 1.16%), Carnival (CCL -2.56%), and Brown-Forman (BF.B 2.57%) are borrowing funds to pay their special dividends. According to The Wall Street Journal and Dealogic, corporate bond sales hit a record in November.

But Costco can get away with this take-from-Peter-to-pay-Paul strategy. Even though the company's long-term debt will triple after its new debt issuance, Costco is still less leveraged than its competitors, although that didn't stop Fitch Ratings from downgrading its bond rating of the company. Meanwhile, Brown-Forman, with its not-as-pristine balance sheet, also got its credit rating dinged after announcing a debt-funded special dividend.

Cash conundrum
Plenty of companies can fund special dividends using the cash in their coffers instead of taking on debt and tarnishing their balance sheet in the process. In fact, S&P 500 companies hold an estimated $900 billion in balance sheet cash, up roughly 40% from four years ago.

But many publically traded U.S. companies hold their cash abroad. Bringing it back to our shores would cost them a 35% haircut to Uncle Sam. With interest rates as low as they are, it's simply cheaper for companies to borrow money than it is for them to move their offshore cash back into the U.S.

Companies like Microsoft (MSFT 3.37%) and Apple (AAPL 3.08%) face this issue. Both companies boast oodles of balance sheet cash that's held overseas, little long-term debt, and modest dividend payout ratios. Both also have wiggle room to grow their respective dividends. Neither company has plans to pay a special dividend before year-end. But should they consider doing so? Are special dividends the best use of their cash?

Both companies use their cash differently. Until very recently, Apple has focused on reinvesting its cash back into the company and not paying a dividend. Meanwhile, software giant Microsoft has returned a lot of capital to shareholders in the form of quarterly dividends. Microsoft started paying a quarterly dividend in 2004, and it currently pays a generous 3.5% dividend yield.

So what's the best use of a company's cash? Dividends? Capital reinvestment? Share buybacks? Acquistions? With regard to the last, Microsoft hasn't had the best history, with its $6.2 billion writedown earlier this year from its 2008 buyout of Seattle-based aQuantive marking just the most recent of several poor capital allocation choices.

Its stock performance reflects this fact as well as the company's trouble navigating a changing competitive landscape. 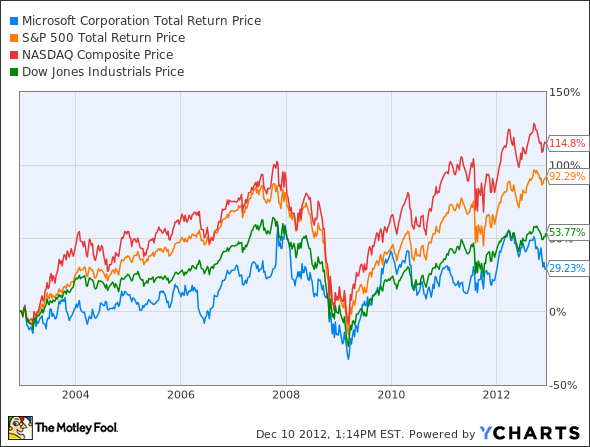 Put simply, Microsoft got smoked by the S&P 500, as well as both the Dow and Nasdaq composites. Obviously, Apple's stock price appreciation has been meteoric. It's returned 6,940% during the past decade.

Foolish bottom line
Admittedly, I'm no expert in capital allocation, corporate finance, and strategy. But I think Foolish investors should examine and question why companies allocate money the way they do. My Foolish colleague Dan Caplinger wrote, "Every dollar you get from a stock in a special dividend is a dollar that the company's management team can't waste." Sad, but very true.