A longtime Intel bear switches sides just as it becomes popular to hate the stock.

I've been an Intel (INTC 3.21%) critic for years. Smaller rival Advanced Micro Devices (AMD 5.64%) made more sense to growth investors like myself, because the underdog seemed to have Intel's number. The much-maligned ATI buyout gave AMD a viable strategy for attacking Chipzilla where it hurts the most -- in the data center and in high-end laptops.

But things have changed. Mr. Market has left Intel for dead, giving me an opportunity to jump in at fantastically low prices. The rumors of Intel's demise have been blown out of proportion. 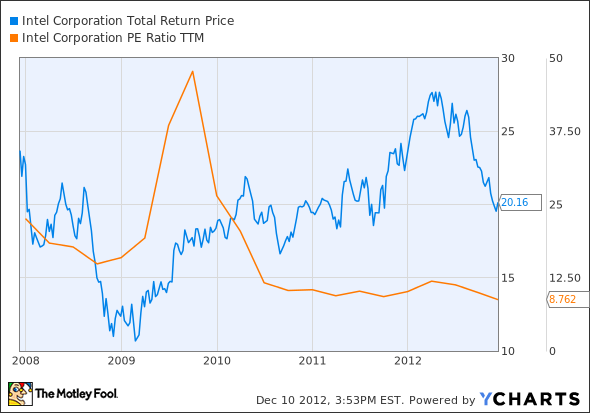 AMD squandered its hard-won Fusion advantage by firing or otherwise driving away many of the people who made the strategy work. A skeleton engineering crew was left without visionary support from their leaders, and the company is circling the drain.

The opportunity
Meanwhile, the computing industry still needs a boatload of high-quality processors, and Intel is really the only game in town nowadays. ARM Holdings (ARMH) is exploring the server space, but without much success so far. Likewise, ARM chips may one day become drop-in replacements for Intel's laptop and desktop processors one of these days. So far, you can't even buy an ARM desktop or laptop if you wanted to.

So Intel missed the boat on mobile computing. The company was part of the Android cabal from Day 1, but device builders never got around to releasing any serious Intel-based tablets and smartphones. Semiconductor executives have been fired for lesser crimes.

But Intel has two very important paths into the new computing market. First, it's the clear leader in enterprise-class server computing. IBM (IBM 2.62%) and Oracle (ORCL 4.54%) have their own PowerPC and SPARC chips, but everyone else builds mid-tier to supercomputing systems around Intel chips. AMD is still an option, but fading fast. And all this newfangled mobile gadgetry is no good without servers standing by to feed them data.

This segment alone will keep Intel relevant for years and maybe decades to come. Let me also point out that Intel's data center division delivers operating margins north of 49% while the PC group sits just above 40%. This is a cash machine of colossal proportions. By contrast, AMD's chip operations barely break even. And mobile processors aren't all wine and roses: The Tegra line of ARM-based chips is a loss leader for NVIDIA (NVDA 5.55%).

The other line of attack is pretty simple. Wait for the mobile market to mature in the ARM era, then move in and start stealing market share when all the low-hanging fruit is gone. Intel knows better than anybody how to succeed in a commoditized chip market, after all.

Bonus points
And the fun doesn't stop there. By buying Intel shares last week, I captured the stock at record-high dividend yields: 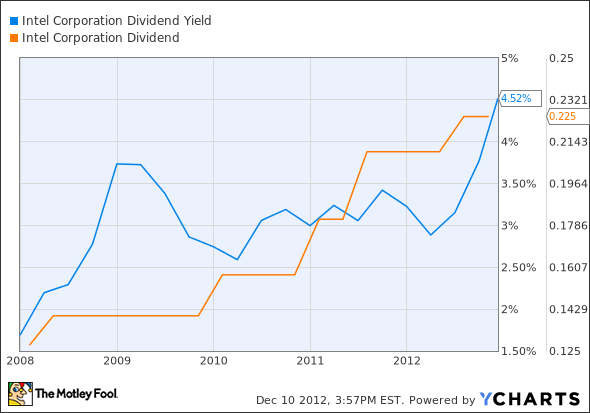 On top of that shareholder-friendly graph, Intel just took out a $6 billion low-interest loan to finance a buyback spree. Share buybacks often destroy more value than they create, but Intel has a history of keeping its gunpowder dry until the deep value is undeniable. And that's exactly where we stand today.

Long story short, I expect this new Intel position to bolster my portfolio in the medium and long terms. Some short-term bumps can't be ruled out, but I'm OK with that. Generous buybacks and dividends piled atop a solid market position adds up to handsome long-term returns.