Last week Canada gave the green light to China's largest foreign acquisition to date when it approved the state-owned oil company CNOOC's (OTC:CEO) buyout of the Canadian company Nexen. The move more than doubled the amount of money China has spent on energy in Canada over the past seven years, and sparked a fair bit of concern among Canadians about the potential pitfalls of foreign governments owning Canada's natural resources.

But China's economy is growing, and the government is using its three state-owned enterprises to secure its energy future, seemingly at any price. Using a data set provided by the Heritage Foundation, let's take a closer look at China's energy investment around the world.

If you're selling, China's buying
Since 2005, China has spent about $505 billion investing in foreign lands. Of that, $192 billion has been spent on energy, and the CNOOC/Nexen deal will push that number north of $200 billion. The graph below shows the top nine locations for investment since 2005: 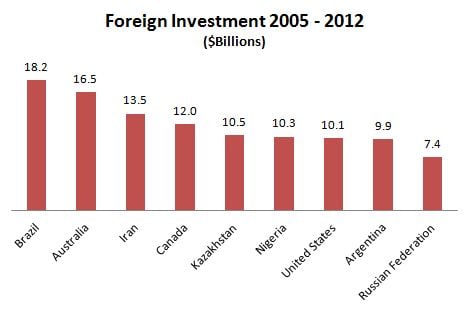 Again, in one fell swoop China more than doubled its energy investment in Canada, spending $15 billion to acquire Nexen, compared to spending only $12 billion in the eight years prior. Australia's number will also rise, as yesterday PetroChina (NYSE:PTR) announced it was acquiring BHP Billiton's (NYSE:BHP) stake in two offshore natural gas fields for $1.63 billion.

The graph shows pretty significant investment in the world's energy-rich countries, but really China does not discriminate when it comes to buying access to resources. The country has invested as little as $150 million in Madagascar this year, and as much as $2.5 billion in Brunei last year.

Types of deals
The CNOOC/Nexen deal was significant not only because of the price tag, but also because it was an all-out purchase of the company. Historically, the oversight for complete acquisitions is higher than it would be for establishing joint ventures or picking up minority stakes in projects. Here are a few of the investments Chinese energy companies have made this year:

Aside from avoiding regulatory hurdles, joint ventures allow China's energy companies to acquire expertise to encourage development of its own natural resources. For example, the Energy Information Administration estimates that China's shale gas reserves are 50% higher than those in the United States.

Foolish takeaway
The reality is that we will continue to see an increase in foreign investment, and not just by China, but all across the energy industry. As resources become more expensive to produce and that production more frequently requires a high level of expertise, consolidation across all energy sectors is unavoidable.