Friday's session saw shares of Cirrus Logic (NASDAQ:CRUS) decline by 6.65% on heavy volume while shares of Apple (NASDAQ:AAPL), its biggest customer, declined by 3.76%. The sell-off has been attributed to a price target cut by Steven Milunovich of UBS, a tepid reception for the iPhone 5 in China, and reduced orders from Apple to its suppliers. Other Apple suppliers were hurt by the news as well, but Cirrus relies on Apple for 62% of its revenue as of 2012 and as much as 79% in the last quarter. Now that the dust has settled, the obvious question becomes: Which stock is the better buy at current levels?

The Friday catalysts
In a research report released on Friday, Milunovich lowered his price target from $780 to $700, cutting his earnings-per-share estimate from $51.50 to $47. "Our previous growth estimates seem aggressive given the European economy and tougher handset competition," he said in the report. He further noted that some of the firm's sources in China don't believe the iPhone 5 will do as well as the iPhone 4S. Last, Milunovich expressed concern that sales of the iPad Mini may cannibalize sales of the larger, higher-priced iPads.

In an unrelated report from Jefferies, analyst Peter Misek said several Apple suppliers have received order reductions, specifically for iPhone 5 parts. In his report, he noted that "in the last 24-48 hours, component suppliers have seen large order cuts as the assembly bottleneck has not improved as much as hoped." He added: "We had thought Apple would be further along the assembly ramp at this point and believe Apple will see extra charges due to the excess component inventory." Misek also reduced his estimated gross margin from 40% to 39% and cut his sales estimates for the first quarter of 2013, from 52 million to 48 million.

The news caused Apple to sell off sharply on the news, but the suppliers were hurt even more. In addition to the slide in Cirrus shares, Qualcomm (NASDAQ:QCOM) shed 4.67%, Broadcom (NASDAQ: BRCM) was off 3.64%, and Skyworks Solutions (NASDAQ:SWKS) was off 5.94%. Each of these suppliers makes critical elements for the iPhone 5, but it's the prime relationship that exists between Apple and Cirrus that makes this comparison interesting.

How is Cirrus positioned?
Based largely on the company's relationship with Apple, Cirrus delivered significant earnings results on Oct. 31; the stock then proceeded to slide 16% the very next day. Revenue jumped by more than 90% on a year-over-year basis to $193.8 million, with earnings posting a record quarter and a year-over-year increase of 154.2%; both numbers were considerably above analysts' expectations. The bulk of the growth came from the company's Audio Product division.

Despite the strong operating results, shares plunged in the subsequent trading session, largely on concerns over tightening margins. Fellow Fool Eric Bleeker offers a comprehensive analysis of the sell-off; his takeaway is that while the close relationship between Apple and Cirrus gives Apple huge leverage over the supplier, the expanding presence of Cirrus in the iPhone and iPad lines eclipse concerns over slightly tightening margins. For better or worse, however, the fates of the two companies are now directly tied together.

To buy or not to buy
Now you have to decide: Whether 'tis nobler in the mind to suffer the slings and arrows of outrageous fortune, or to stay on the sidelines while these two companies work through their current challenges. At current levels, Apple appears to have limited downside and should be considered a buy. The stock has fallen roughly 27% from its record high of $705.07 on Sept. 21, and while this represents a steep correction, prospects for the future are far from bleak.

To put this into some context, the price-target reduction that sparked much of Friday's sell-off still looks at $700 as the level upon which to focus. Other analysts haven't lowered their forecast at all. Piper Jaffray analyst Gene Munster defended his $900 price target as recently as Dec. 5. While this may be too aggressive, the message is that Apple can be expected to recover.

The following chart shows that the two stocks have had nearly identical performance over the past six months, although the range for Cirrus is significantly wider, suggesting that the stock is more volatile. Interestingly, the stocks have nearly identical betas of 0.95 and 0.93, respectively. Over longer measurement periods, Cirrus has outperformed Apple handily. 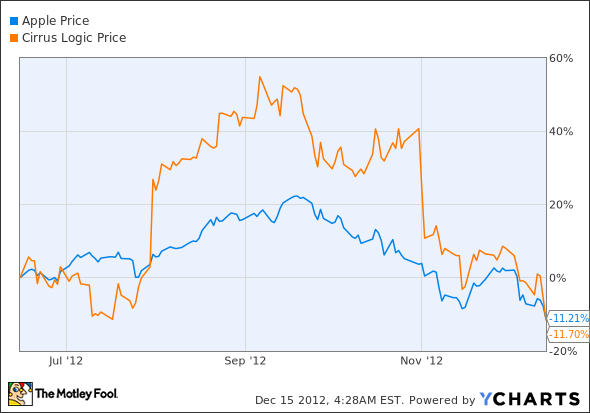 A matter of risk tolerance
Ultimately, the choice between these two stocks should be driven by your ability to tolerate risk. Cirrus is likely to recover faster and post bigger gains once the current downtrend is reversed. While we Fools don't like to advocate timing the market, you must consider how much downside risk you can endure if you buy either name here. Not only does Apple pose less risk in the likely size of its moves, but its products also have the added layer of protection that its customers are a diverse group. Should a serious threat to Cirrus emerge, the loss of Apple's business would be crippling at best.

While I like both of these names at current levels, Apple will be the more stable choice while Cirrus has the potential for bigger gains. When making this assessment for your own capital, keep in mind that a return to the $705 high for Apple represents a 38% spike from current levels; this may be plenty of upside for your portfolio.