To help Foolish Investors better understand the oil and gas boom in the United States, we're putting together a series of articles focusing on the major energy plays in the Lower 48. We'll need to rely heavily on these areas to achieve North American energy independence. Let's kick this series off with a look into the Williston Basin.

Introduction
The Williston Basin is an intracratonic sedimentary basin  spanning across North Dakota, South Dakota, Montana, and the Canadian province of Saskatchewan. "Intracratontic sedimentary basin" may sound like a mouthful, but basically it just means the area is a stable continental crust that used to be connected to the sea. Over time, marine carbonates and sedimentary rock have been trapped in the area, and the combination of time, pressure, and heat has turned them into oil and gas. 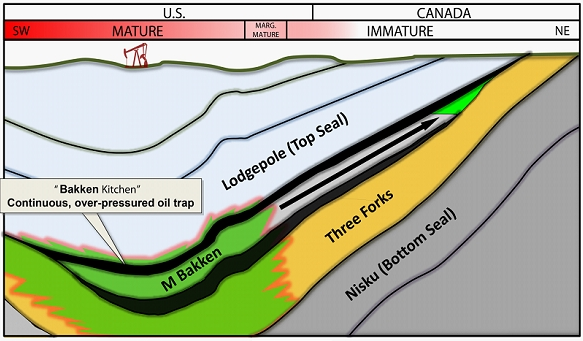 Natural gas was first discovered in the Williston Basin back in 1892 and was first commercially produced in 1913 . But it wasn't until 1951 that the first commercial oil production began. A U.S. geological survey conducted in 2008 estimated the area to have 3.65 billion barrels of oil, 1.85 trillion cubic feet of natural gas, and 148 million barrels of natural gas liquids, but estimates for both locations continue to change.  Continental Resources (NYSE:CLR), the largest producer in the play, thinks the Bakken formation, one of the major formations in the Williston Basin, holds closer to 24 billion barrels  of recoverable reserves alone. The USGS is currently working on new oil estimates for the Bakken and will complete its report in 2013.

The Bakken formation consists of upper and lower shale layers and a middle sandstone layer. The upper and lower Bakken shale layers contain large amounts of organic-rich petroleum source rocks. The middle layer is made up of mostly sandstone, which can be tapped by both conventional and continuous oil production. The Williston Basin also contains the Three Forks formation. Three Forks is more porous than the Bakken shale, which means oil and gas recovery rates are potentially higher.

The warlords of Williston
With all the oil and natural gas in the Williston Basin, competition for acreage is high. More acres equal more drilling access. According to the North Dakota Department of Mineral Resources, there are just under 8,000 active wells in the whole basin, and about 85% of the stuff coming out of the ground is oil. Considering that the Permian Basin in Texas has more than 82,000 active wells, it's easy to see why the Bakken has so much room to grow. 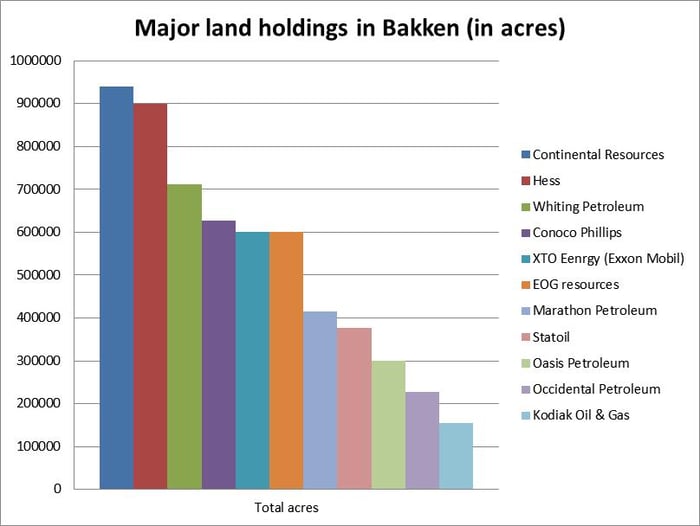 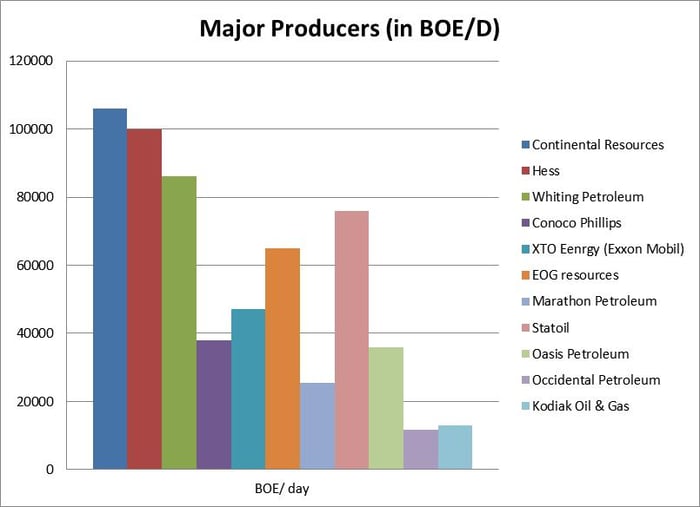 Since much of the Bakken is so underdeveloped, almost all of these companies want to increase production output at an extremely rapid pace. Continental Resources will increase production through building more wells; it currently has 235 this year but will have 262 in 2013. Hess increased Bakken oil production by 94% year over year in Q3, with an average of 62,000 BOE per day. Hess expects production to flatten out the first half of 2013 as it switches to more efficient drilling, but it should ramp back up in the second part of the year. ExxonMobil recently purchased Denbury Resources' (NYSE:DNR) assets in the Bakken, increasing its land acreage by 196,000 net acres. ExxonMobil expects this purchase to increase production by 15,000 BOE per day. 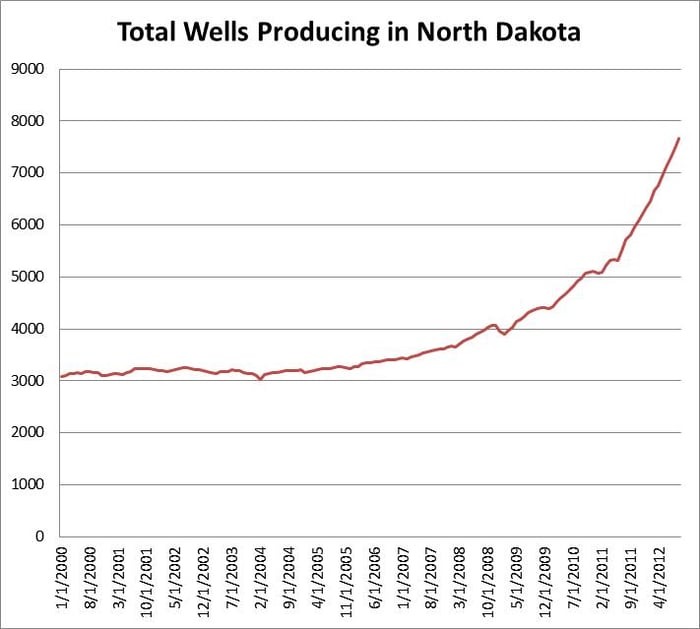 Drilling economics
Let's be clear: Exploration in the Bakken is expensive. Recent wells in the region have cost anywhere in the $6 million to $12 million range. These costs are so high because most companies have to drill as far as 10,000 feet down and another 10,000 feet horizontally. The drilling depth of the well has been one of the driving factors of cost for this region because the wells take longer to drill. Most of the higher-priced wells are going all the way down into the Three Forks formation, which lies below the Bakken formation. On a drilling-days comparison, Hess and QEP Resources (NYSE:QEP) have the highest drill time, while Whiting, Marathon, and Kodiak have the lowest. Drilling days do not directly correlate with wellhead costs, but they can give a rough idea of drilling depth, drilling efficiency, or the difficulty of the drilling plan. These are normally all indicators of wellhead costs. Depending upon the drilling depth, companies benchmark their breakeven costs in the range of $55 to $70 per barrel .

According to the North Dakota Industrial commission, most wells in the Bakken and Three Forks formations have an anticipated lifespan of about 30 years, and each well can be fractured two to three times to prolong the productive life of the well. Take this number with a grain of salt, though, because depletion rates for wells in the Bakken are extremely high. After a few years, the production rates drop off very quickly. The average well in the play will lose 50% of its production rate within five years. Take a look at the e0stimated production decline curve for a well owned by Kodiak oil and gas. This graph is in logarithmic scale, so it shows an estimated production decline of 85% by 2015. 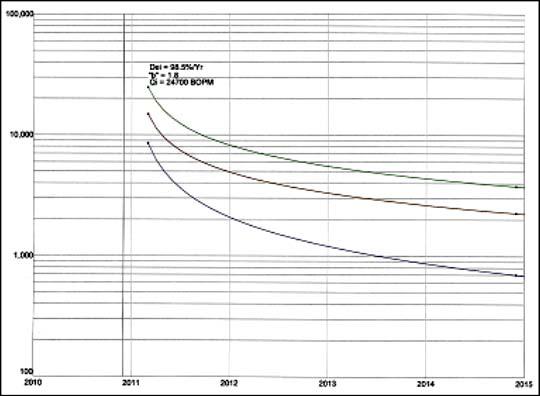 This translates into high-cost wells that will require multiple fracturings and enhanced oil recovery methods, or EOR, such as CO2 injection. Expect companies that specialize in EOR to come in and buy wells a few years after the original operators have extracted all they could using traditional fracking techniques It will be difficult for the region to remain commercially viable, if oil prices were to drop.

So what makes Bakken oil so special that companies would be willing to spend so much to get to what could be a rapidly depleted well? Simply put, some of the best-quality crude in the world. Bakken crude has an average sulfur content (an impurity) of about 0.1% by weight, this is less than one-fourth of the sulfur content of both West Texas Intermediate (WTI) and Light Louisiana Sweet (LLS). Also, when Bakken crude is distilled into its components, we see a yield of almost 45% gasoline, compared with 35% for WTI and 30% for LLS.

From November 2011 to this September, Bakken oil never sold for more than a $7 discount to the WTI benchmark. Back in February, it was selling for as low as a $28 discount to WTI spot prices. Despite that crude quality, a transportation bottleneck in the region kept companies in the region from selling at a premium, as the Bakken produced more oil and gas than the pipelines and rail systems in the region can carry. Thanks to rail lines and terminal investments from Tesoro (NYSE:ANDV), EOG, and Statoil, these oil bottlenecks are starting to clear. This September, the region started to sell its oil at a premium to WTI.

So you want to buy Bakken?
To give an idea of how much it will cost for a piece of the Bakken pie, let's look at two recent transactions in the region. The Denbury Resources/Exxon deal I mentioned was for 196,000 acres in the Bakken. Exxon subsidiary XTO Energy paid $1.3 billion plus assets in Wyoming and in Texas for the transaction. These are more mature plays in the field that will more than likely require EOR methods such as CO2 injection. For a more speculative play, Continental has plans to buy another 120,000 acres of undeveloped and producing leases from various sellers in the region for $650 million. With increased transportation capabilities in the region, and oil now selling at a WTI premium, expect those prices to increase as well.

What these Fools believe
With recent oil prices much higher on a BTU comparison to natural gas, liquid-heavy plays like the Bakken and Three Forks Formation will help to drive profits for companies in the region. Anyone who has a stake in this play will have at least 20 years of revenues flowing out of the ground. With expanded (and ultimately cheaper) transportation infrastructure, companies in the region will be able to deliver crude to the Gulf for refinement or export and continue to pull in a premium on WTI spot prices.

One of the ways a company can stand out in this region is to keep its well costs at a minimum. That's what makes Kodiak Oil & Gas an attractive player in the space. As one of the more efficient drillers in the region, it is extracting profits at a rate much higher than its competitors. Our analysts here at the Fool have put together a premium report on this company and how its strategy to be a premier player in the Bakken could turn them into a huge player in North American energy independence. To get your own copy of this report, Click here!