To help Foolish investors better understand the oil and gas boom in the United States, we are putting together a series of articles focusing on the major energy plays in the Lower 48. We'll need to rely heavily on these areas to achieve North American energy independence. Today, we're going to take a look at the Haynesville-Bossier Shale.

The Haynesville-Bossier formation is one of the largest producing natural gas formations in the U.S. The shale is located in Louisiana, Arkansas, and Texas, but most of the production occurs in Louisiana. The formation is composed of sedimentary rock stretching more than 10,000 feet below the ground. 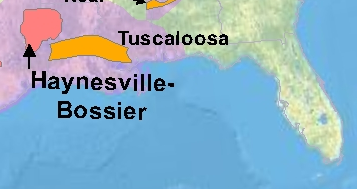 Haynesville-Bossier contains 95% "dry" gas, which means a high percentage of methane. The formation has what is called high geopressure, so the shale is porous and has a low stress point. This is important for drillers because these lower stress levels translate to less pressure to frack the rock, which makes hydraulic fracturing easy to use in the Haynesville-Bossier Shale.

As one of the leading natural gas producing shales in the U.S., Haynesville, along with the Barnett and Fayetteville Shales, produces 70% of shale gas in the United States. Haynesville produces about 5.9 billion cubic feet of gas per day (bcf/d), compared to the Barnett Shale's roughly 5.6 bcf/d.

The Haynesville play has been one of the fastest-growing production centers for natural gas in recent years. Production from the Haynesville, Marcellus, and Eagle Ford fields have been the largest factors in doubling the country's daily output of natural gas. At just over 25 bcf/d, this marks the first time since the 1970s that U.S. production of natural gas has outpaced consumption. 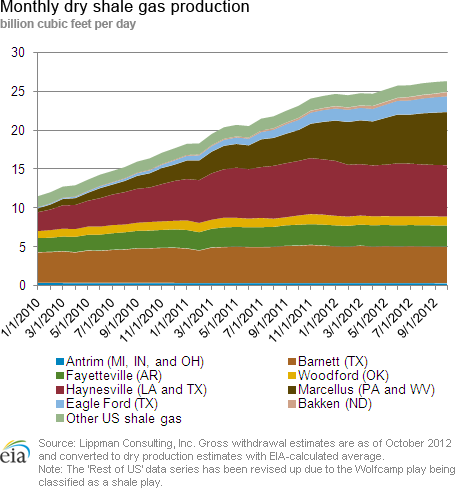 The hoarders of Haynesville
The amount of land, and number of wells, can be a big factor in which companies ultimately produce the most natural gas. In Louisiana, where the majority of Haynesville production takes place, Chesapeake Energy (NYSE:CHK) has the lion's share of holdings, with Exco Resources (NYSE: XCO), Petrohawk (a subsidiary of BHP Billiton (NYSE:BHP)), Plains Exploration (NYSE: PXP), ExxonMobil (NYSE:XOM)  Encana (NYSE:ECA) and EP Energy rounding out the top seven.

Here's a breakdown of the largest land lease holders: 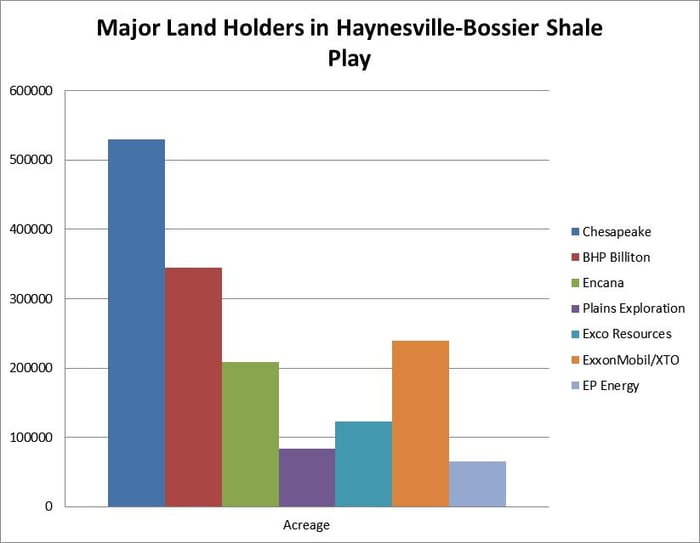 Like several of the other unconventional shale plays in the U.S., Chesapeake Energy holds a significant piece of the pie in the Haynesville-Bossier region.

Production and active wells
Chesapeake is not only the largest land holder in Haynesville, but also one of the major producers there. Some companies don't report their production rates as frequently as others, so comparing current rates can be difficult. But the Louisiana Department of Natural Resources lists the number of active wells, and you can see from the chart below who's in the lead. 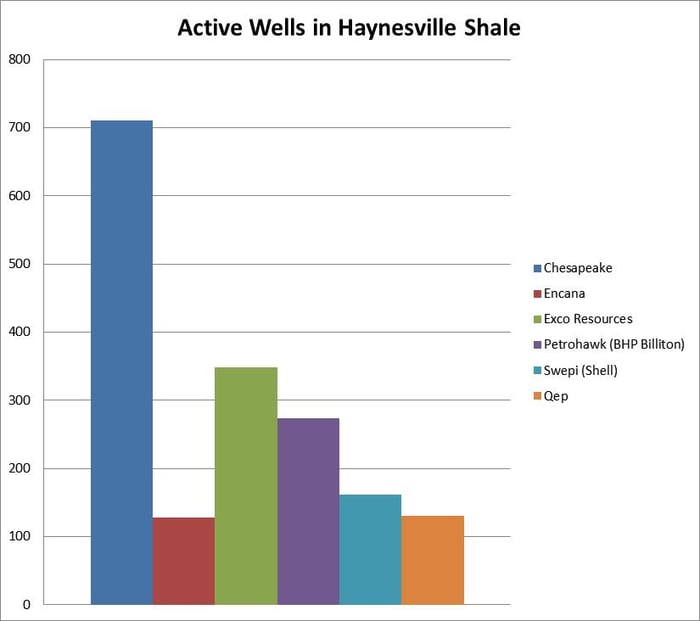 In 2007, right before the shale gas boom, seven wells were beginning to be drilled in Haynesville. At the peak of Haynesville drilling in 2010, there were 890 wells spudded. In the first and second quarter of 2012, only 88 wells were spudded ­– the least amount since production began. You can see from the Energy Information Agency graph above that production for Haynesville has declined since the beginning of 2012 and remained flat since about April of the same year.

So, while some well production is declining, there is not a lot of rig activity to replace the lost production. You can also see that the number of active rigs declined from late 2010 up until early 2012. 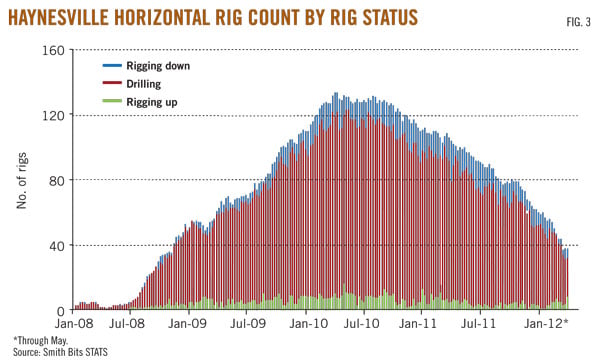 A recent article in the Oil & Gas Journal estimates that Haynesville production could drop as much as one-third in 2013. There are two main reasons for this. First, natural gas prices are low, and the costs for drilling and extracting natural gas in this region are high. So it's simply not profitable to drill lots of new wells for gas that won't bring in much revenue.

On top of that, other shale plays offer "wet" gas, instead of Haynesville-Bossier "dry" gas. The wet gas contains other gases besides methane, like butane and ethane, which can be sold in addition to the natural gas. About 95% of Haynesville gas is dry gas, so there isn't much butane or ethane in the gas to be separated and sold.

Other shale plays with a higher concentration of natural gas liquids, like the Utica formation in Ohio, will likely see more activity than the Haynesfille in the short term, until gas prices go up again.

Drilling economics
There seems to be a continuing trend when it comes to unconventional gas plays: A company will spend a lot to spud a well. True vertical depths for wells in the Haynesville play range from 11,000 feet to more than 15,000 feet. This puts drilling depths for Haynesville well below the other emerging natural gas plays, like the Marcellus or the Utica. It should come as no surprise, then, that many of the Haynesville wells have been some of the most expensive wells in the country, with completion costs averaging $9.5 million per well. This puts the average cost per well in Haynesville 35% higher than the second most expensive play in the U.S.

Like the Marcellus, the Haynesville-Bossier play is still a young, underdeveloped resource. This makes it difficult to estimate with certainty what its future decline rates will be. Preliminary well data for the Haynesville play put initial well rates at about 9.5 million cubic feet per day (mmcfd), which, at first, would seem extremely positive. (The next best play, Marcellus, runs at about 4.5 mmcfd.) Keep in mind, though, that the early reports on decline rates are also the highest for Haynesville, with an expected first-year decline in production of about 86%, according to a report by the Oil & Gas Journal. These same reports also estimate that the ultimate recovery for a well in the Haynesville will be about 3 billion cubic feet.

Based on well costs, expected production, and current natural gas prices, drilling in the Haynesville region is not a profitable venture at the present time. The following chart from the Oil & Gas Journal gives a total net present value for a well, based on the cost of a well and a price range for a thousand cubic feet (mcf) of natural gas.

The most recent spot price per mcf of natural gas at the Henry Hub is $3.39. Based on this price, a well in the Haynesville would need to have cost less than $5 million to complete in order to bring a positive dollar value to an exploration and production company. Based on these numbers, it's not so surprising to see several companies divert drilling operations away from the Haynesville. 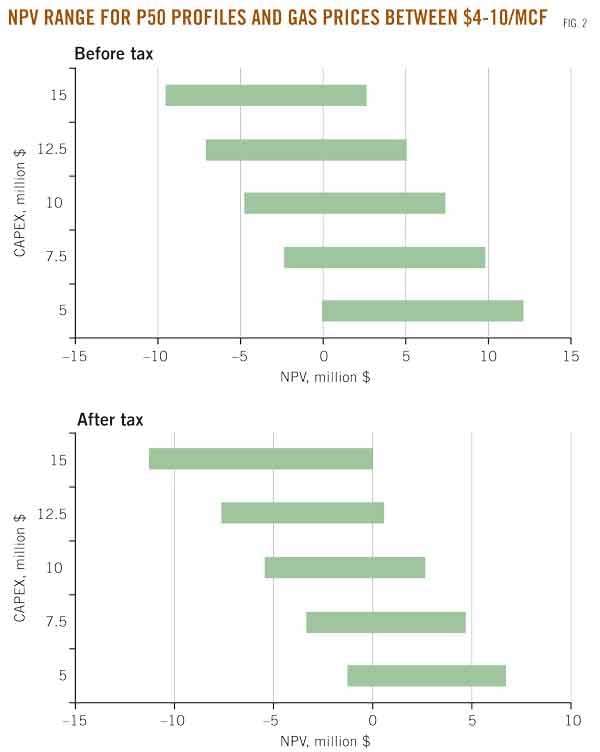 This shouldn't completely discourage companies from investing in the area, though, because the Haynesville play has a distinct advantage over many of the other newer shale plays in the U.S. -- a robust pipeline network already in place. 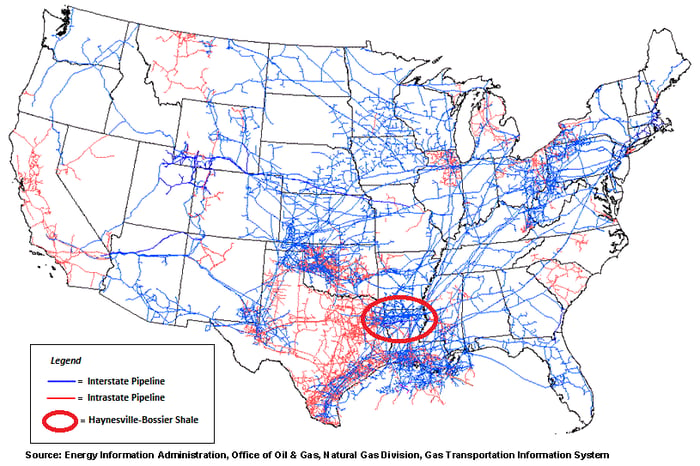 The Louisiana/Texas region has long been a major hub for imports and refining. So the existing pipeline network, and proximity to the major refineries in the region, make for easy access.

In order to bolster the existing infrastructure, Energy Transfer Partners (NYSE: ETP), Enterprise Products Partners (NYSE:EPD), and Enbridge (NYSE: EEP) have recently installed pipelines with a total capacity to move 5.9 bcf/d. Pipeline expansion may be a bit superfluous right now, thanks to cheap natural gas and a ramping down of production; but when gas prices move back to profitable levels, expect these new pipelines to be very useful.

So you want to buy Haynesville?
At current gas prices, few companies will want to sell assets unless absolutely necessary, because they would more than likely have to sell them at a discount. To get an idea of prices during more favorable drilling conditions, Denbury Resources (NYSE:DNR) sold all of its 19,500 acres in the Haynesville Shale play back in 2010 for $217.5 million, or about $11,000 an acre.

This is just above the $9,000 an acre average, based on data collected by Mark Kaiser at Louisiana State University.

What these Fools believe
With gas prices expected to stay low, and lots of wet gas available in other shale plays, investors shouldn't expect too much action in the Haynesville-Bossier formation anytime soon. The costs associated with drilling in the Haynesville make it too prohibitive for a company to make money in this production environment. Until takeaway capacity and downstream markets open up for natural gas, expect prices for gas to remain low. Producing wells will continue to stay online, but don't expect production to ramp up unless something drastically changes.