Many midstream companies were able to reap the benefits of America's energy boom this year, recording record volumes and revenue, but there are also a few companies that are looking forward to putting 2012 behind them. Today we'll take a look at five big losers, and what might be in store for them in 2013.

It was the worst of times
Without further ado, here is a look at some of the worst performing midstream stocks this year: 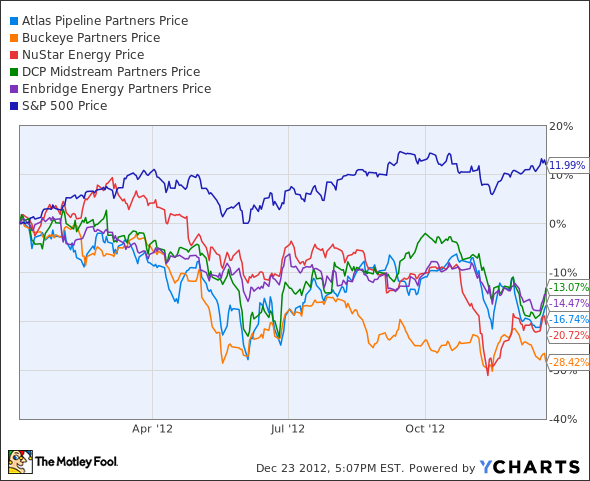 Atlas Pipeline Partners (NYSE: APL) fell 16.7% this year, though it was down more than 25% as late as June. This is quite a disappointing performance from a company that returned close to 50% in 2011. Basically, Atlas got killed on commodity pricing this year, particularly for NGLs. Net income didn't exist in the third quarter: Atlas reported a $6.4 million loss, compared to income of $50.3 million in 2011.

Looking ahead, volumes are increasing across Atlas' systems, which is good. The partnership has also hedged natural gas and NGLs, with the exception of ethane, through 2015, which may offer some protection against commodity risk .

Additionally, Atlas' recent deal to pick up Cardinal Midstream may lead to a brighter future as well.

Buckeye Partners (NYSE:BPL) dropped 28.4% since the beginning of the year. Buckeye started 2012 off by missing earnings, then missing again, and finally beating the street in the third quarter for the first time in six tries .

The future is still a big question mark for Buckeye, however. The partnership's assets are mainly refined product pipelines and terminals. Demand for refined products has been dropping steadily in the U.S., and that story is playing out across Buckeye's system. Additionally, some expensive recent acquisitions may be a drag on the partnership's distributable cash flow, making Buckeye very much a "wait and see" story right now .

NuStar Energy (NYSE:ES) is down 20.7% this year, and the partnership is desperately trying to turn the beat around. It recently announced it was expanding its presence in the Eagle Ford shale by acquiring $425 million in assets from TexStar Midstream. Production is growing at break-neck pace in the Eagle Ford, and there is a lot of midstream activity there.

Another thing that will bode well for NuStar's future is its shift away from margin-based business. The partnership announced its plan to sell its San Antonio refinery to Calumet Specialty Products (NASDAQ:CLMT) for $100 million, plus $15 million in inventory .

DCP Midstream Partners (NYSE:DCP) lost 13% of its value this year. The master limited partnership is controlled by its general partner, DCP Midstream LLC, which is itself a 50/50 joint venture between Phillips 66 (NYSE:PSX) and Spectra Energy (NYSE: SE). The partnership got crunched by its propane segment in the third quarter, but its NGL logistics and natural gas services segments performed well.

Like NuStar, DCP is trying to cash in on the Eagle Ford shale. It recently announced it would build a cryogenic processing facility with a capacity of 200 million cubic feet of gas per day, expected to be completed by the first quarter of 2014 . Though most producers are targeting oil in the Eagle Ford right now, many of the original three-year leases in the liquids and dry gas windows signed in 2009 and 2010 are held by production, which means landholders will have to start producing or risk losing their stakes. DCP's facility will likely come online right when it's needed most.

Enbridge Energy Partners (NYSE: EEP) fell 14% this year, though its 7.7% distribution yield may encourage investors to be slightly forgiving. EEP is the master limited partnership associated with Enbridge (NYSE:ENB) and Enbridge Energy Management (NYSE: EEQ). It is in the process of shifting its business mix toward liquids from natural gas, in order to take advantage of America's booming shale plays.

EEP has an upside, but investors won't necessarily cash in if it gets there. EEP's general partner (ENB) has the right to 50% of incremental distributions above a quarterly payout of $0.445 . That sort of incentive structure isn't unheard of, but investors do have other options -- better performing ones, too.

Even the losers get lucky sometimes
One bad year doesn't mean it's all over for the companies above. North American energy production will continue to grow for the next few years, giving these beaten-down stocks plenty of opportunity to turn the beat around.