While Annaly has been a great investment over the last few years, there are reasons to think this may change.

Mortgage REITs have become increasingly popular investment vehicles over the last few years -- and none more so than industry pioneer Annaly Capital Management (NLY 2.36%). With a yield of 12.3%, Annaly's stock has returned 61% since the end of 2007, beating the broader market by nearly the same amount.

But all good things must come to an end. Since the third quarter of 2011, Annaly has slashed its dividend from $0.60 per share down to $0.50 per share, a decrease of nearly 17%. While this doesn't necessarily mean that the good times are completely over for mortgage REITs like Annaly, it seems safe to say that the returns won't be as good going forward as they've been in the recent past. Here are three reasons why.

1. The Federal Reserve
Roughly three months ago, the Fed announced a third round of quantitative easing, under which the central bank is purchasing $40 billion per month of agency mortgage-backed securities until the labor market improves "substantially."

While many analysts, myself included, speculated at the time that the move would disproportionately impact mREITs, which rely on inexpensive MBSes to make money, we now know the precise contours of said impact. As I've discussed before, and as you can see below, valuations across the industry have declined in the wake of the Fed's move. And given the indefinite duration of QE3, it seems reasonable to assume that this trend will continue. 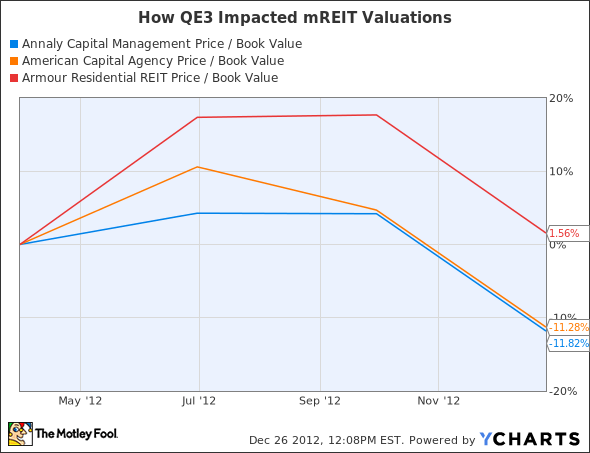 2. The MBS market is getting crowded
In many ways, the mREIT industry is a victim of its own success. Beyond the Fed's increased presence in the market for MBSes -- which has driven MBS prices up and yields down -- multiple new players have entered the market over the last few years, further exacerbating the pressure.

Sources: SEC's EDGAR database. This table was previously cited by me in this article.

To name only the most significant, CYS Investments (NYSE: CYS) started operations in 2006, Two Harbors (TWO 0.61%) in 2007, and both American Capital Agency (AGNC 1.73%) and ARMOUR Residential (ARR 2.26%) joined the party in 2008. The impact of this is simple as I've noted before: "Because more money is vying for approximately the same supply of agency-backed MBSes, the prices of the latter will invariably remain elevated and their yields concomitantly depressed."

For companies like Annaly, this means a future of more risk and less spectacular returns.

3. Changing risk profile
The final reason that investors should consider selling Annaly is that its risk profile is in the process of fundamentally changing. By investing almost exclusively in agency MBSes for most of its corporate existence, Annaly shielded its shareholders from credit risk, the most incipient of financial threats.

As Annaly's former CEO Michael Farrell put it in a 2007 statement to shareholders:

Since inception, our focus on agency mortgage-backed securities has been a core tenet of [our] philosophy. Because of the actual and implied triple-A rating of these securities, we take virtually no credit risk. Instead, it allows investors in Annaly to judge our performance and potential performance based on our ability to manage interest rate risk. We believe this choice has served our investors well over time and, given the current state of both the credit cycle and the interest rate cycle, leaves us strategically well-positioned for the current environment.

This is now changing. At the beginning of November, Annaly announced its decision to acquire Crexus Investment (NYSE: CXS), a commercially focused REIT operating under the Annaly umbrella of companies. While it appears the move will be immediately accretive to Annaly's profitability, it also exposes Annaly's investors to Crexus' uninsured, albeit significantly smaller, portfolio of assets related to commercial real estate.

To make matters worse, moreover, there's reason to believe that Annaly will continue down this path. At the time of the Crexus announcement, Annaly's CEO Wellington Norris noted (emphasis added):

While we remain committed to the Agency market, given the current environment, we believe it is prudent to diversify a portion of our investment portfolio. Therefore, we may allocate up to 25% of our shareholders' equity to real estate assets other than Agency mortgage-backed securities.

While this may be a prudent move in the short run, if it proceeded to include, say, the acquisition of Chimera Investment (CIM 1.21%), a highly suspicious and regulatory delinquent non-agency mortgage REIT that similarly operates under the Annaly umbrella, it would be a clear sign that the strategy is being taken too far.

Fool contributor John Maxfield has no positions in the stocks mentioned above. The Motley Fool owns shares of Annaly Capital Management. We Fools may not all hold the same opinions, but we all believe that considering a diverse range of insights makes us better investors. The Motley Fool has a disclosure policy.