Please ensure Javascript is enabled for purposes of website accessibility
Log In Help Join The Motley Fool
Free Article Join Over 1 Million Premium Members And Get More In-Depth Stock Guidance and Research
By Eric Volkman - Dec 26, 2012 at 10:12AM

Shares of NorthStar Realty Finance (NRF) reached a 52-week high on Christmas Eve. Let's take a look at how it got there and whether its foundations are strong enough for continued growth.

How it got here
The housing market has been picking up over the past few months, and that's great for mortgage originators but not necessarily for mortgage REITs. As my Foolish comrade John Maxfield explains, the mortgage-backed securities that feed these players are experiencing a squeeze.

The Fed, with its ever-growing quantitative easing series aimed at increasing liquidity and spurring the housing market, is particularly adding to demand for MBSes. This boost in demand drives down their yields.

And if yields are down, you can be pretty sure that the juicy dividends that characterize the sector are going to fall. This has happened in a great many instances. The 800-pound gorilla of the sector, Annaly Capital (NLY -0.88%) recently declared a 4Q payout of $0.45 per share, which was so much coal in the stockings of investors who had reaped $0.50 the previous quarter and as much as $0.75 three Christmases ago.

That dividend erosion is the rule rather than the exception for the business at the moment. Look at Resource Capital (ACR 0.46%), whose quarterly disbursement has dropped to $0.20 from more than double that figure only several years ago. Or American Capital Agency (AGNC -1.04%); its payout slid to $1.25 at the beginning this year after holding steady at $1.40 for a complacency-inducing 10 quarters in a row.

NorthStar, by contrast, has moved in the other direction. Its most recent dividend is $0.17 a share, representing a cautious yet steady climb from the $0.10 it paid out for over two years until late 2011.

Dividends are everything in the REIT world; typically, as they go, so go share prices. The difference in one-year performance is stark. Among a selected group of NorthStar and its peers, guess who's got the highest increase by far? That's right: 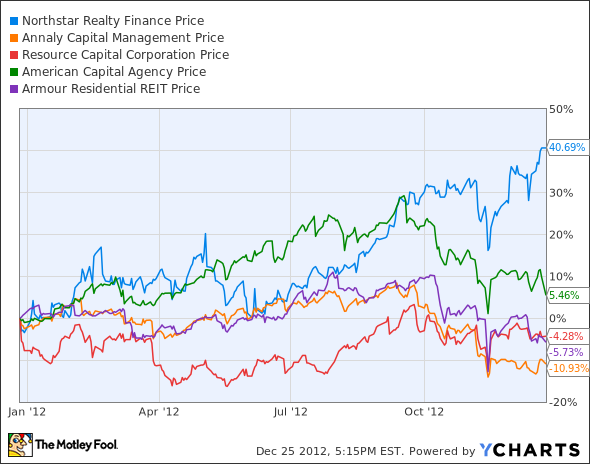 A landlord and a banker
What helps is that the bulk of NorthStar's portfolio is divided more or less evenly between direct investments in real estate debt (first mortgage loans and preferred equity stakes, to name only two) and the more traditional mREIT play of real estate-related securities (like the Fed's current favorite, MBSes). Both categories are roughly even in terms of allocation, at around 40% each of the total portfolio.

The remainder consists of net lease properties (around 14%). In other words the trust brings in some of its money the old-fashioned way, by owning real estate and renting it. And the final, smallest piece of the pie is asset management, which is NorthStar reaping fees from the various securities it originates or maintains.

It's a pretty even mix, and as such it provides a good hedge against dips in the market -- like, for instance, when the MBS scene gets too stuffy and yields begin to go down.

NorthStar is getting rather good at this hedging. Net interest income on its securities in 3Q, not surprisingly, took a big hit, falling by 22% year over year to $70 million. But other revenues picked up much of that slack by growing nearly 50% over 3Q 2011's numbers. The company almost quadrupled its take from commissions, while it did the landlord thing effectively by improving rental and escalation income at an 11% clip.

As a result, adjusted funds from operations (a key metric for REITs) saw a nice boost over the one-year period, to $39.5 million this past quarter. That was good enough for a 35% rise over 3Q 2011's $29.3 million. Investors like those kinds of numbers.

What's next
As long as the MBS crunch lasts, look for NorthStar Finance to benefit. And it probably will, as the housing market isn't out of the woods yet, and big Fed programs have a way of carrying on for a while (this current QE round is No. 4).

One factor potentially limiting upside for the company is dividend yield. As its share price escalates and that of its rivals erodes, the difference in yield becomes wider. The spread is getting wider; NorthStar's yield has dropped below 10%, while Annaly's is over 12%, and Resouce Capital's is 14%. And it's easy to find players with even higher numbers, such as New York Mortgage Trust (NYMT 0.29%) at 17%.

NorthStar's fundamentals are good, and it's currently in a better position than many of its REIT peers. It's just a question of whether investors are willing to accept a lower yield in return for these pretty features.

A 9% Yield and Undervalued? I’m Buying This Stock