There's more where that came from.

There's good reason why the mobile battleground is moving to China. The Middle Kingdom is the world's most populous nation by far, and that's a lot of subscribers looking for mobile connectivity, even if broader growth has been somewhat decelerating of late. I keep track of subscriber figures from China Mobile (CHL), China Unicom (CHU), and China Telecom (CHA), so let's look how the three main wireless carriers fared in 2012. The trio recently put up digits as of November, so we'll look how they compare with last November. 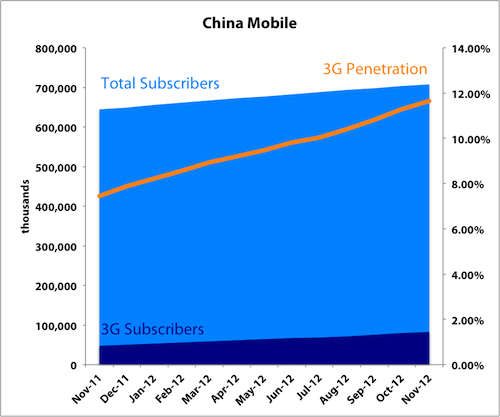 This is due to a number of reasons. First and foremost, China Mobile uses a unique 3G network standard, TD-SCDMA. Handset manufacturers tend to make devices with broad compatibility, so they sometimes overlook China Mobile despite its lusty subscriber base. This has historically been exactly why Apple (AAPL -2.23%) doesn't offer the iPhone on China Mobile, although the iPhone 5 is compatible.

Also, China Mobile focuses more heavily on the prepaid segment, which generally brings in lower average revenue per user, or ARPU, and subscribers are more price sensitive. Since the prepaid segment is mostly an unsubsidized market, the high price tags of smartphones also tend to scare off consumers relative to a subsidized purchase.

China Unicom
The second-largest carrier was also the first iPhone carrier in the country. China Unicom has enjoyed healthy subscriber gains and has 3G penetration of 31%. 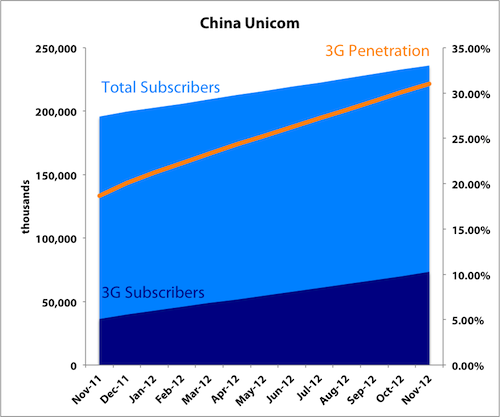 China Unicom has 162.9 million mobile subscribers, of which 73.3 million are 3G subscribers.

China Telecom
Coming in third place -- but closing the gap with China Unicom -- is China Telecom, which is within 5 million subscribers of becoming the No. 2 carrier. Even though it's the smallest, it actually has the highest 3G penetration rate at nearly 42% of subscribers. The carrier has 158 million subscribers, including 65.9 million of the 3G variety. 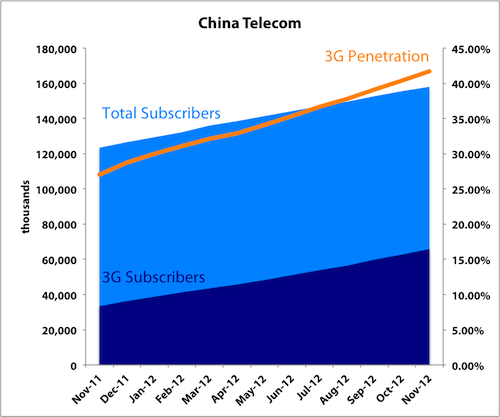 Two bigger pictures
If we put all these figures together, we see that there are now over 1.1 billion mobile subscribers in China. Within that total, 3G subscribers have soared by 88% to 221.6 million, representing 20% 3G penetration. 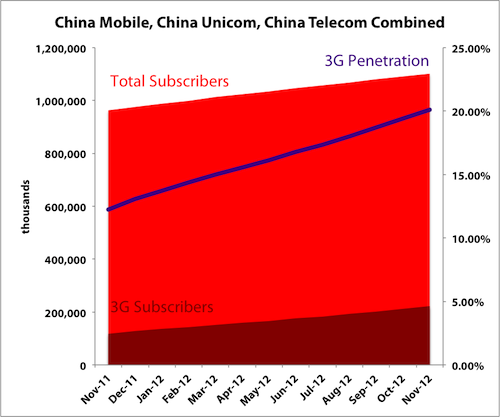 It's no coincidence that China Mobile's share of the 3G market in particular has suffered as a result of its unique network standard and lack of iPhone availability. That's why it seems inevitable that Apple and China Mobile will finally ink a deal next year, as it would be mutually beneficial. 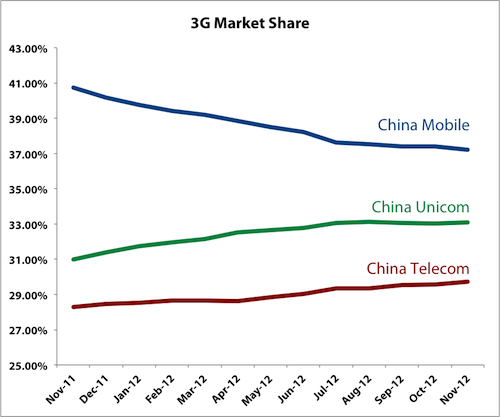 China Mobile is perfectly aware of how big of an opportunity it represents for the iPhone maker. The company is leveraging its position and wants some type of "benefit sharing," as it's likely seen the margin-draining effects that the iPhone has had on other carriers throughout the world.

There's more where that came from
Apple's not the only one looking to tap into the mobile growth in China. Due to Apple's hesitancy to address low-end (and low-margin) market segments, there's a lot of room for rivals to squeeze in from below. Many local white-box original equipment manufacturers -- like ZTE, Huawei, and Xiaomi, among others -- have been enjoying unit growth on the low end.

But if there's one thing investors should remember about the smartphone market, it's that market share doesn't equal profit share.