Just like last year, Flurry Analytics is sharing numbers on how iOS and Android ruled Christmas. The market researcher has released some figures related to Apple (NASDAQ:AAPL) iOS and Google (NASDAQ:GOOGL) Android device activations as well as subsequent app download activity, and 2012 blew 2011 out of the water.

Flurry even goes as far as to say this year, "more iPhones, iPads, Galaxy's, Kindle Fires, and more, were activated than on any other day in history." It's not surprising that mobile gadgets were popular gifts this year; earlier data out of Nielsen showed that's about all kids were wanting this season, with the iPad in particular topping the list. 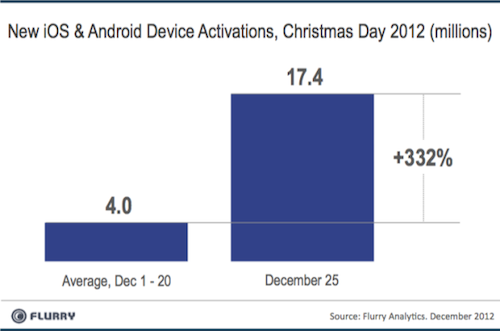 A baseline is set for Dec. 1 to Dec. 20, and average iOS and Android activations in that time this year was 4 million. When all those gifts were unwrapped on the morning of Dec. 25, that figure skyrocketed to 17.4 million, a 332% jump. Compare that to last year where the baseline was 1.5 million and Christmas day activations were 6.8 million.

Flurry also looked at the composition of smartphones and tablets. During the baseline period, smartphones were 80% of activations with tablets being the remaining 20%. On the Dec. 25, it was split about evenly. That means there were quite a few tablets being gifted this year, and Flurry figures that iPads, iPad Minis, and Amazon.com's (NASDAQ:AMZN) Kindle Fire HD were the biggest winners. Amazon grew its tablet activations by "several thousand percent" relative to its baseline.

I would also think that Google's Nexus 7 did well, even though it's not specifically mentioned in the report. The Nexus 7 is a more full-functioned device compared to the Kindle Fire HD and it targets the same pricing segment.

Judging by these figures, it looks like a lot of you got tablets for Christmas, and that's good news for Apple, Google, and Amazon.