As the economy marches ever closer to the fiscal cliff, Molycorp remains familiar with what going over a cliff feels like. It seems as if every time the company gets a little traction, something comes along to upset the proverbial applecart -- given the importance of China in the rare earth sector, many of these catalysts have come from there. Fiscal cliff talks seem to have followed a similar pattern, with many economists, including those at the Congressional Budget Office, believing that the lack of a resolution will cause a deep recession and cost as many 2 million jobs . While economic hardships are not what we would hope for, recessionary pressures may represent the type of opening needed to get rare earth prices and Molycorp stock headed back in the right direction.

The fiscal cliff
Treasury Secretary Geithner, in a letter to Congress, recently wrote: "'I am writing to inform you that the statutory debt limit will be reached on December 31, 2012, and to notify you that the Treasury Department will shortly begin taking certain extraordinary measures authorized by law to temporarily postpone the date that the United States would otherwise default on its legal obligations."' While the debt ceiling does not perfectly fall in the realm of the fiscal cliff, it provides a backdrop against which all other issues must be considered -- if your credit card is about to be declined, where you are shopping is of less consequence.

The fiscal cliff is the name given to the tax hikes and spending cuts that are scheduled to begin in January -- several tax relief measures will end and sequestration measures will be put into place. The tax ramifications include the expiration of the so-called Bush tax cuts, the end of extended unemployment benefits , and the cancelling of the payroll tax holiday . Sequestration refers to previously determined budget reductions that have been agreed upon in connection with a bipartisan initiative. The theory behind the plan was that if the two parties were forced to agree upon some necessary spending reductions, with sequestration being the penalty for not reaching an agreement, they would. Yet again, Congress underestimated its own capacity for pettiness.

The role of commodities
During a recession, or even the very real threat of one, you would expect commodities' prices to be soaring. As any gold or silver investor will tell you, however, this has not been the case. As the chart below illustrates -- using the SPDR Gold Trust (NYSEMKT:GLD) as a proxy for gold and the iShares Silver Trust (NYSEMKT:SLV) as a proxy for silver -- both precious metals have been under pressure for the last three months despite the threat offered by the fiscal cliff. The role that the cliff will play in both the gold market and in the silver market differ from what is expected for Molycorp and the rare earths, but demonstrate that commodities are not being driven purely by recessionary concerns. 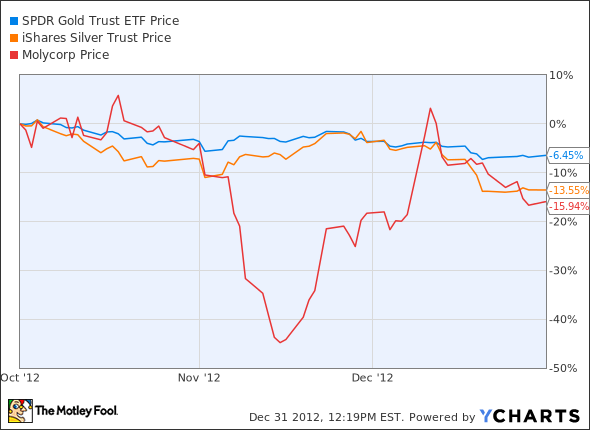 The price spike in Molycorp's shares that you can see on the chart was driven by the announcement by the Chinese government that it planned to clamp down on illegal mining activities and assert greater control over the rare earth market. At the same time, China's largest light rare earth producer, which is responsible for roughly 50% of global production, decided to halt operations for a month  in order to help balance supply and demand. Competitors such as Avalon Rare Metals (OTC:AVLNF), Rare Element Resources , and Australia's Lynas Corp., all benefited from the news that provided only temporary support for prices of the commodities and the stocks' prices.

What happens in China will continue to be important, as the country's export policies continue to determine global prices. China produces roughly 95% of the world's rare earth materials. Ed Crooks of the Financial Times writes: "Rare earth metals such as neodymium and praseodymium are essential for many products and industrial processes, from smartphones to cruise missiles. China's control of world supply -- it has accounted for about 95% of global output -- has fueled concerns about its dominance and excitement about the prospects for rival suppliers such as Colorado-based Molycorp."

Other positives for the company include the recent resignation of the company's CEO. Molycorp is facing an investigation by the SEC over accounting issues. Even if the company is cleared of any wrongdoing, coming under the stewardship of new management should prove a positive. Reuters has already reported that various analysts see the move as a positive for the company.

At the bottom of the cliff
Given the importance of China in the prices of rare earth materials, a deep U.S. recession may end up being of less importance than will be likely for other commodities. On the other hand, given the importance of some of these commodities in defense applications, "congressional sources argue that the creation of a U.S. rare earth strategic reserve is more likely to get the go-ahead ." Deepening weakness in the U.S. economy is likely to make such an initiative of even greater performance as it may be billed as an issue of national security relevance. In this less-than-direct approach, falling off the fiscal cliff may be bullish for Molycorp. Regardless of these forces, Molycorp remains a speculative play and should be treated as such within your portfolio.

If you are looking for more commodity-based advice and a company whose success is determined by the metals market but is not involved in the risks of physically mining the metals, then Silver Wheaton provides a unique play on the future of silver. SLW chooses to finance the mining of silver; it has grown sales and net income every year since 2008, and also has increased competitive advantages over its limited peer group. More details about our outlook for Silver Wheaton can be found here in our Motley Fool analyst report.